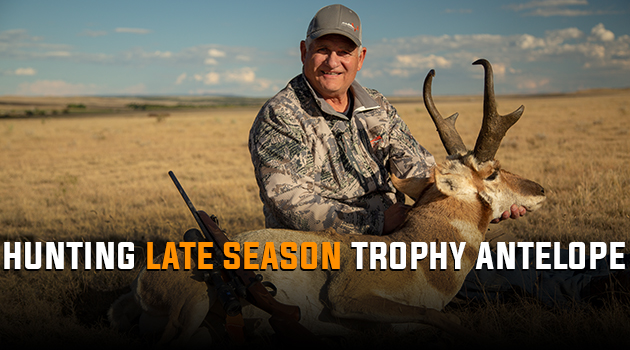 Hunting antelope bucks with a rifle in mid to late October is my personal preference. Many western states have hunting seasons that last well into that time frame. In fact, Montana’s antelope season sometimes runs well into November. A big advantage to hunting this late is that by the time October rolls around, most hunters have filled out or given up completely. After spotting a big buck in the final days of the season, the concern of other hunters competing with you almost becomes a non-issue. On most days, I can have the entire unit to myself!

By mid-October, with the rut finally behind them the antelope will begin to group up for the coming winter. This scenario can be both good and bad. It’s good because sometimes a huge buck will show up for their winter gig. It’s bad because if you don’t know exactly where the antelope winter, you can find yourself looking at a lot of empty country.

The key to finding bucks is to learn the antelope migration movements within your unit. This knowledge comes only from hunting during that post-rut period for several seasons or talking to the area biologist about where the antelope congregate when a late fall storm blows in.

Now let me give you an excellent example of knowing your hunting area and the movements of antelope. In 2007, I drew a good Wyoming antelope permit. It was my third in a row – a record for me. If you look at the drawing odds for residents in that unit, it’s only about a thirty percent success rate. Those of you who watch our TV show know that I have hunted this particular area many times. I know it very well and the season typically runs from the second week in September until the third week in October.

I always plan on hunting the last week or ten days of the season. That way, I’m sure to find the bucks grouped up. I have learned over the years that if we get weather in the northern part of the unit the antelope start moving down out of the high country. That’s right – in this unit, those old boys summer above 8,000 feet in the aspens and pinion pines.

Well, that year it was snowing and blowing on October 17. The wind was blowing over 35 miles an hour and it was very cold – a good old-fashioned Wyoming ground blizzard. It was cold enough that I had both sets of insulated long underwear and my wool. While it was storming and blowing, a group of seven buck antelope came trailing off the mountain like migrating bull elk. I got the spotting scope on them and couldn’t believe what I was seeing. Three of the seven were B&C-quality bucks. I judged one giant buck as having 17-inch-plus horns. I couldn’t believe it – three book bucks in one group, and on public land! In 45 years of hunting antelope, I had never seen such a sight.

I quickly made a move and intercepted them. My luck held and I took the long-horned buck and he hit the tape at 17 inches right on the button. 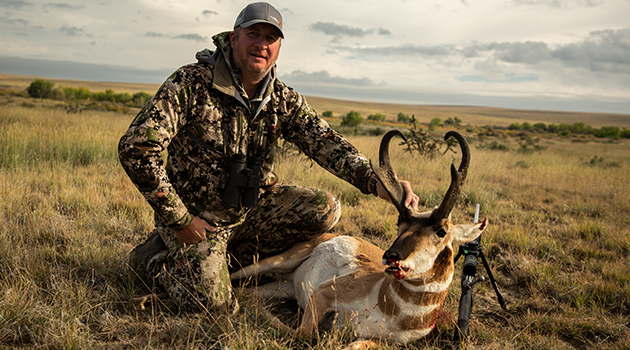 Now, here’s why I was able to find three B&C antelope bucks that day and harvest one of them. First, I knew the area like the back of my hand; I knew the exact corridors the antelope used to come down into their wintering grounds. Antelope have a habit of using the same migration corridors, slots and trails to move out onto the winter range. Usually it isn’t a mass migration of hundreds of antelope at a time; rather it’s likely to be small groups coming through on a daily basis.

That’s where a journal comes into play. Observe the movements of antelope and then document those migration routes. From one lookout I call “the point of the hill,” I can see different groups coming through every day. Those antelope are moving out of country that I find hard to get into, or they are summering on private land.

In some units, the antelope don’t have to move much at all. Because of natural or man-made barriers, they’ll stay in a relatively small area throughout the year, but even those antelope will at least move some for the winter. It might be to a spot where the wind isn’t as bad and the snow isn’t drifting deep, or where the vegetation might be exposed by wind. Trust me, the antelope know where to go to get away from that terrible blowing snow and will find sheltered valleys and ravines that have good winter vegetation for feed.

An additional advantage to hunting antelope later during the year is that during snowstorms you can get closer to antelope than you can during a stalk on a bright sunny day. During flat light conditions, I’ve been able to easily sneak right up on a band of antelope. When I see overcast skies, I know that the weather will be in my favor and a stalk will be more likely to come together. Plus, when it’s snowing, they just seem to tolerate you getting closer for some reason. Many times I have harvested good bucks when the snow was coming down hard and fast. Most hunters stay inside during these adverse type conditions but if I can see at all, I’ll be out there looking for that one-in-a-thousand buck.

That brings up another point; antelope, with those big bulging eyes, have a hard time seeing in a snowstorm. I mean it can make them about half blind. I think they can see forms and shapes and that’s about it. I’ve walked right up to within 200 yards of antelope on a snowy day on more than one occasion. They’ll often just stand and look at me, trying to make out what I am. So, when it’s spitting snow I have one more advantage to help me find and take a trophy buck.

Keep in mind however, that time of year when the snow flies and it gets cold, the buck’s horn sheaths will start to loosen up. I think it’s at least partially triggered by the colder weather. When you hunt antelope in the west at the end of October or in November you’ll sometimes find bucks without horns. I know that in Montana you can hunt the season into the first week of November, but I think that is getting too late. You could easily spot a toad of a buck with only one horn!  Now folks, that will ruin a good hunting day. So I don’t push the envelope and hunt in November, but October is an excellent time to find a trophy antelope that has outsmarted most other hunters.

1-The antelope group up into large herds.

2-Late season groups of antelope tend to not be quite as spooky to stalk up on.

3-In a snowstorm or overcast cloud cover it’s easier to stalk a big wary buck.

4-The antelope herds will usually move through predictable migration corridors.

For an in-depth study of antelope hunting all phases of the season, check out Mike’s book, Hunting Trophy Antelope – A Do-It Yourself Guide.