Champ, Me And Gobblers

Finally on April 25 the high winds backed down to a low enough wind speed to get after hunting down some wild turkey gobblers. So Champ and I agreed to get together after the end of his school day. After I picked him up we went to an area named the Point, it’s where an East-West fence and a North-South fence intersect and cross the properties 2-track farm road. Wild turkeys regularly come through the Point on their way back to the evening roosts along the river a mile to the West.

Champ set out our decoys and I put our gear inside the Lazy Man ground blind I set up at the point  previously. The blind had been moved by someone and we wouldn’t be able to shoot to our right, which is the most frequently traveled direction. But I hadn’t wanted to make the noise that moving it would take. That urned out to be one of those “I shoulda done it” deals.

Champ and I got inside the blind and sat down. 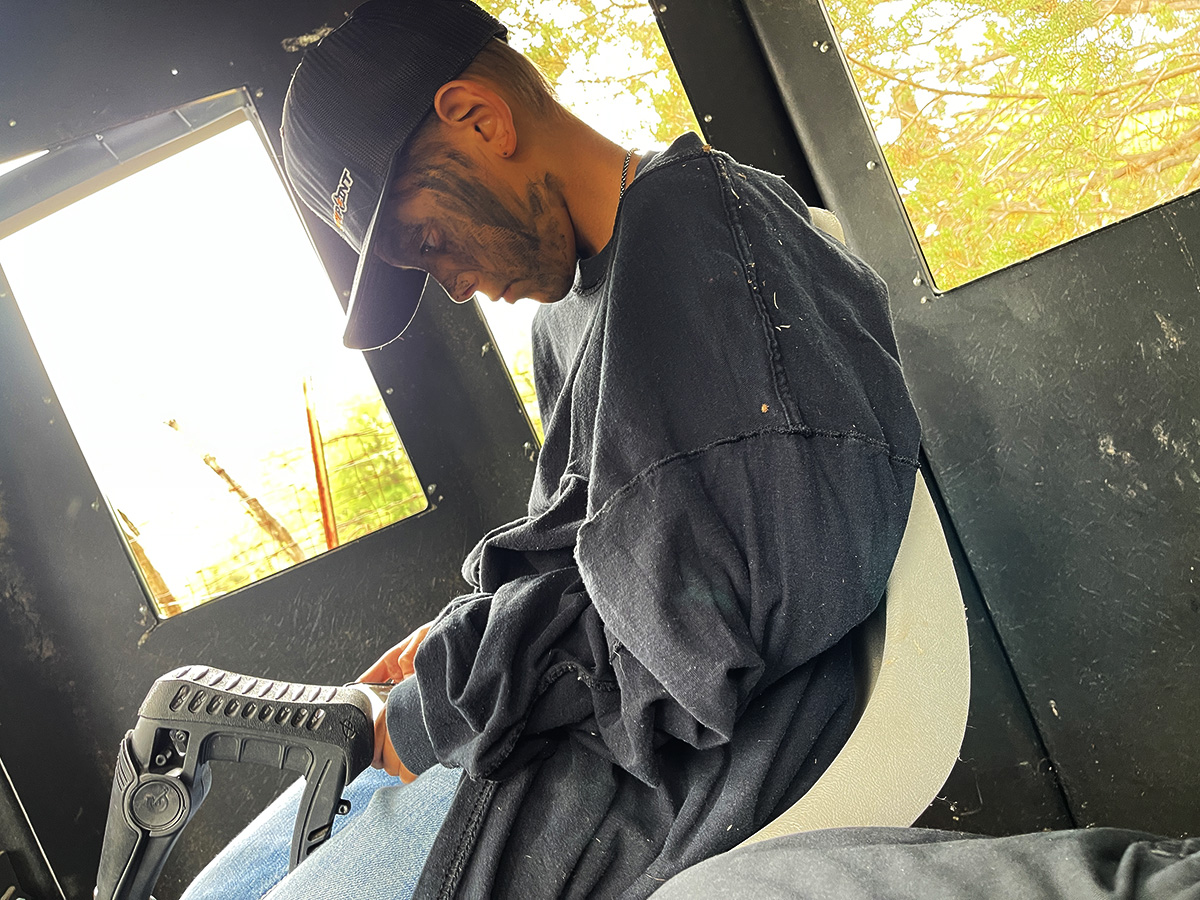 I took a quick picture of Champ Bullard as we waited quietly in a LAZY MAN GROUND BLIND for wild turkeys to come through the area.

I waited half an hour to call and then every 15-20 minutes I called again — on a Billy Yargus Blue Viper mouth call. I picked up a gobble on my second sequence. He sounded about 200 yards off but didn’t reply any more.

The Lazy Man ground blind is made of fiberglass, it is an excellent blind, it has all the right features. I didn’t take a picture of it at the Point but I will the next time I hunt there.

BINGO! Champ signaled that he had just seen a gobbler in the nearby cedar trees on our right. Today Champ is using his Barnett recurve crossbow and he quietly got it ready, if he needed it. I turned on my Sony camera and turned it on. When I looked up I saw 3 Gobblers 35 yards away so I gave them  some Billy Yargus call soft yelps. The gobblers all popped into full strut. They waited briefly and then stepped out from behind the trees and into the open. I did a turkey moan and two very soft yelps and and two of them gobbled loudly. Then walked closer to us. I put the Sony to work. 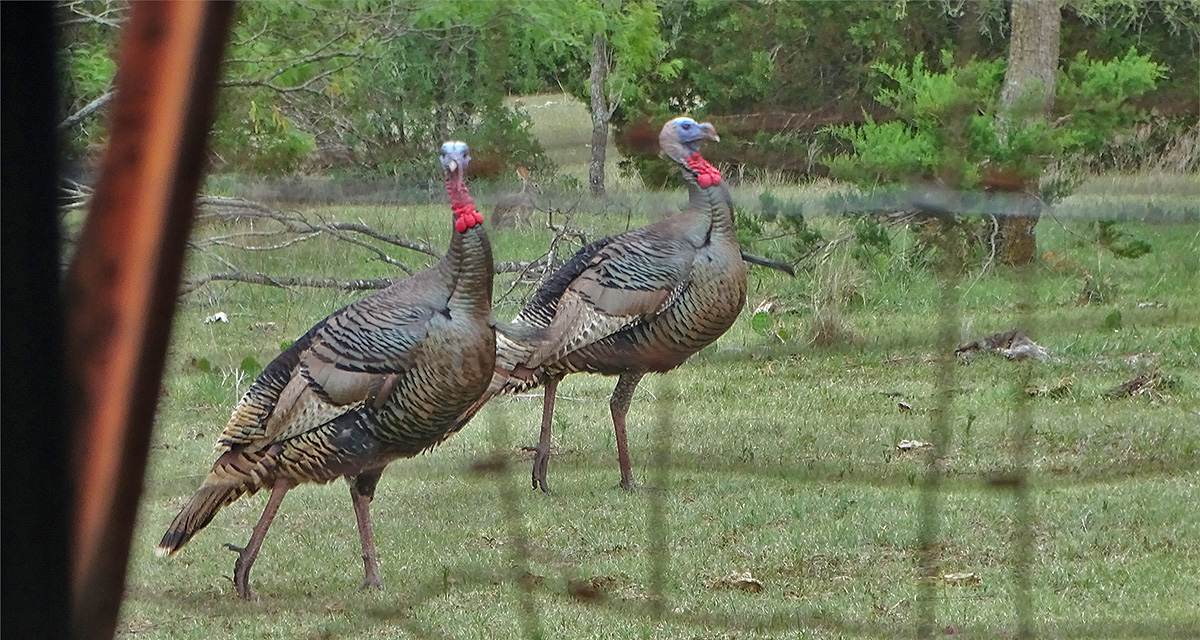 When they were a little closer I took the picture at the top of this page. They are now on the side of the blind where Champ is sitting, and 10 yards from us. We are both hoping that they see our decoys and go to them. 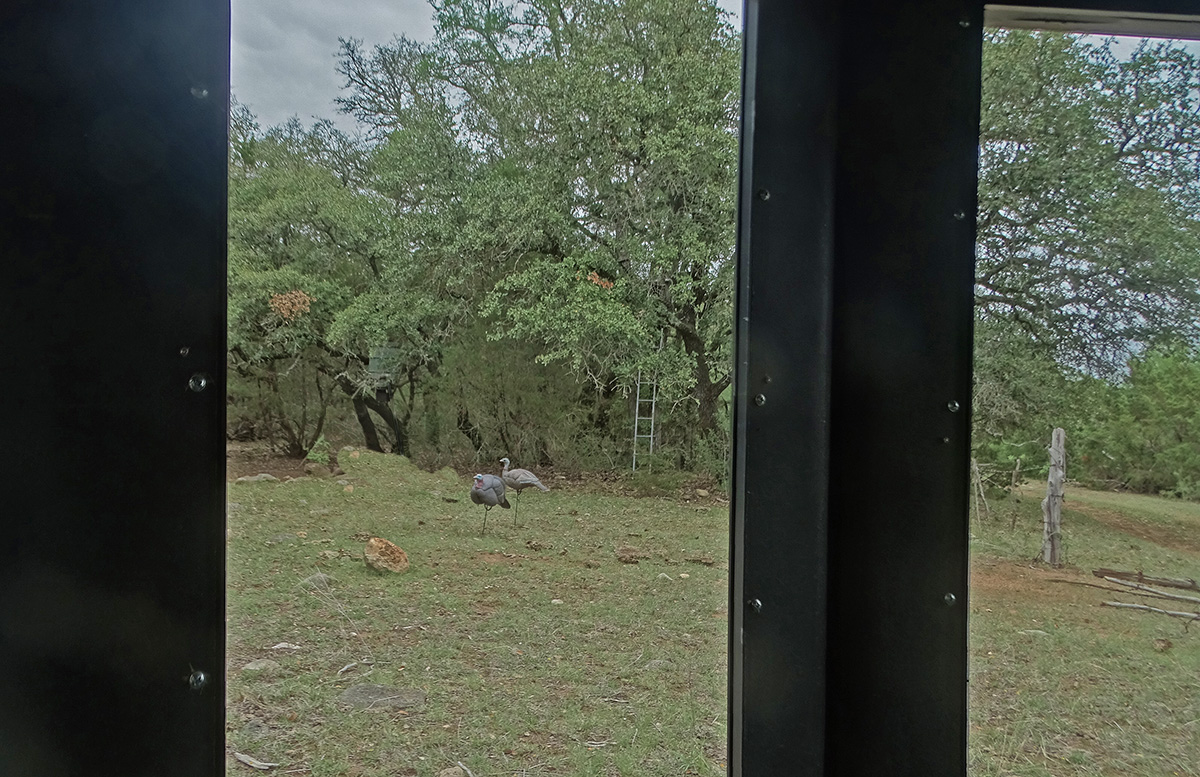 Looking through the front window of the fiberglass Lazy-Man ground blind. The 3 gobblers were to our right but that side of the blind had been moved and was against a fence, so Champ could not shoot.

As you may remember, someone had moved my blind, and that was a problem now. Champ could not shoot to where the  Gobblers were because the blind was against a section of fence. And the blind was blocking their view of the decoys. So they cruised on in the direction of the river roosts.

As time passed we saw two more solo gobblers. They each passed by us 50 yards away. I called at them but apparently it was too close to roost time and they continued on in the direction of the river.

Life was good in the wild turkey woods this afternoon.