What Is Causing The Spread Of Hoof Rot? UPDATE 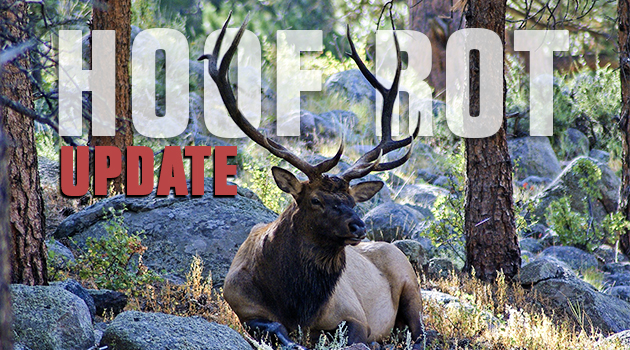 Hoof rot or TAHD has been around for more than 30 years in the Pacific Northwest but has spread and really become worse in the past 15 years. Unfortunately, we still don’t know what causes the disease. Over the last few years, I have looked into possible causes and the plethora of theories on the disease, which is found primarily in elk. For anyone not familiar with hoof rot, I encourage you to take a look at the blog I did two years ago introducing some of my findings and reported theories. This article can be found here.https://blog.eastmans.com/hoof-rot-a-crisis-in-the-pacific-northwest/

Since then, the situation has been brought to light even further. As more and more people grow concerned, the idea of herbicides used by timber companies to eradicate vegetation in cutting units has caused a change in the soil which allows bacteria to flourish that haven’t in the past. The spraying regiment by the Weyerhaeuser timber company that was implemented in 2006 consists of five different chemicals used on clear cuts after they are logged. Chemicals like Atrazine, Clopyralid, Hexazinone, and Indaziflam are a part of that regimen. You might know them as Roundup, Crosshair, Rodeo, Transline, and Velpar. These chemicals keep brush at bay, such as Alder, Scotch broom, and blackberry for a long time so it doesn’t compete with the new chemical resistant Douglas fir seedlings. There are four plausible hypotheses for how chemicals sprayed in the forest may be the root cause of hoof disease in elk as described in the Daily Chronicle by Jon Gosch.

The first is that herbicides are known to dramatically reduce the quantity and quality of forage for elk, and that alone can cause hoof problems as farriers have testified, as I illustrated two years ago. The forage that remains after the herbicides is of questionable quality, and likely a factor in researchers’ findings of poor forage quality in the Mount St. Helens elk herd.

The second hypothesis is that the immunotoxic properties of the herbicides such as atrazine are weakening the immune systems of elk and making them susceptible to bacteria they had previously been able to ward off. Atrazine is one of the most commonly sprayed forestry herbicides despite being banned by the European Union in 2004 because of persistent groundwater contamination. According to a report by the National Toxicology Program, which is administered by the U.S. Department of Health and Human Services, “atrazine was found to adversely affect the immune system and, thus, is considered to be an immunotoxic compound.”

The third hypothesis is that the absorption properties of herbicides such as glyphosate (the active ingredient of Roundup and Rodeo) strip the soil of vital micronutrients and make them unavailable in the forage that elk depend on. “WDFW’s own research has shown that deficiencies of copper and selenium are associated with keratin irregularities which can cause hoof deformities.

The fourth hypothesis was provided by a WSU researcher, Dr. Michael Skinner. He has recently demonstrated that exposure to glyphosate alters the molecular make-up of DNA, which can negatively impact physiology and promote numerous diseases that did not previously exist. Disturbingly, these epigenetic changes are inherited by generations to come. Though Dr. Skinner’s experiments were conducted on rodents, he believes that glyphosate exposure likely produces similar results in all mammalian species.

To get down to the bottom of this, the state of Washington allocated $3M to WSU for two years to study this disease which started in 2018. Here we are two years later and the facility and program at WSU are still having a hard time identifying where these bacteria that cause hoof rot come from in the first place. “Traditionally, we grew bacteria on laboratory culture plates to investigate what organisms are present and thus confirm diagnosis of a disease. But not all bacteria grow well in laboratories, including bacteria implicated in hoof disease.” ,from WSU Update #8.

Initially, the WSU research team studied tissue samples under a microscope which provided findings that bacteria is present and can be isolated to cause the disease. However, a new method of analyzing bacteria will be implemented through metagenomic analysis. A metagenomic approach uses DNA to identify the types of bacteria in a sample which gives the scientists the ability to determine which type of bacteria might be most important in causing the disease. This is a great advancement over other methods in many circumstances including diagnosis of elk hoof disease.

There are other theories out there on how it spreads too. One is that the elk in the highly affected areas don’t migrate any more and spend all their time in the very moist agricultural areas so they don’t have a chance for their feet to dry out.

As this disease continues to spread and develop, the maps indicate new cases along the Columbia River corridor into eastern Oregon, and one in the Snake River country of Idaho. This is a different habitat type than we’re used to seeing hoof rot in and there is hardly any timber company land in these regions. Are private landowners using the same type of herbicide that timber companies use in these areas? Or maybe herbicides don’t affect the elk as much as we think? Perhaps Dr. Skinner is on to something. He demonstrated that exposure to glyphosate alters the molecular make-up of DNA, which can negatively impact physiology and promote numerous diseases that did not previously exist. Disturbingly, these epigenetic changes are inherited by generations to come. As the years go by elk move around, migrate and breed and this genetic alteration is bred into the next generation.

Yet all we can do now is wait for answers from WSU and speculate. I encourage everyone to do what you can as a hunter and report any limping animals to the WSU research program and if you can afford it, donate to the Veterinary, Microbiology and Pathology program for the ongoing research. This could be the only hope to save the elk for future generations in the Pacifc Northwest.

5 Best Fly Tying Kits: A Buyer’s Guide to Fly Tyin...
Where Do We Draw the Line on New Hunting Technolog...