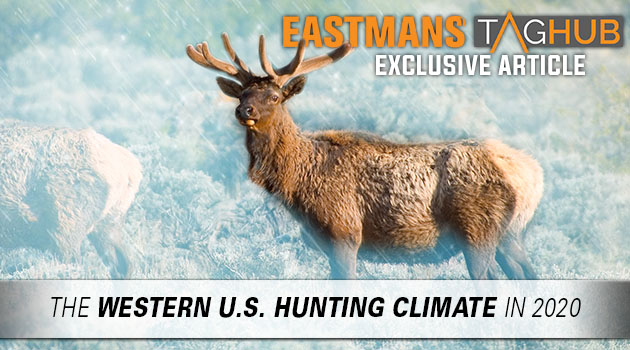 Weather is arguably the single biggest influencer on hunting success or failure. In the short term, it determines how we dress for a hunt, what gear we’ll take along, where we’ll choose to hunt, and even whether or not we even can hunt. Even the most prepared hunters would be foolish to venture out into a blizzard to fill a tag on opening day. But weather has already been at work this year to affect the outcome of our hunting experience this fall. From late-winter snows to spring and summer thunderstorms, the moisture die has been cast to determine where browse will be plentiful and where it will be scarce. The overall long-term weather patterns have been setting up to reveal which areas will have early or late snow, and if cold winter temperatures will arrive early or late.

This is my 40th year working in meteorology. After 20 years in broadcast meteorology, I spent eight in forensic meteorology and two in fire meteorology before working at Cabela’s headquarters for a decade providing long-range weather outlooks and short-term weather threat analysis to help guide decisions about what hunting and fishing gear would be needed where on a seasonal basis. As an avid hunter and angler, I understand the importance and impact of timely weather information on outdoor recreation. I also authored a book in 2008 called “Trophy Bucks in Any Weather” to explain how weather influences big-game animal behavior.

The purpose of this article, which I wrote in June of this year, is to set the table with the meteorological and climatological “lay of the land” as we enter fall hunting seasons in the U.S. Information was gathered from multiple U.S. and global weather agencies to ascertain what hunters may encounter in the field this fall as a result of weather across the U.S. over the last several months, and probability that the pattern will shift into a La Nina configuration during the fall.

Montana: If you’ve drawn a Montana tag, you’re fortunate. From a water and browse standpoint, Montana is faring better than most other western states this year. Rainfall in most drainages and basins is near or a little bit above where it was last year. But the forecast calls for above-normal temperatures and below-normal precipitation through August across the state.

Idaho: The first half of the year was seasonably warm in Idaho, but May saw a big uptick in precipitation north of the Salmon River. Precipitation was well above average in most counties bordering Washington during May, and that had a very favorable impact on vegetation and browse. But conditions aren’t as rosy in other parts of the state.

Central Idaho started the summer classified as being in severe drought and it’s only going to get worse heading into fall. Particularly dry were areas in Blaine, Camas and southern Custer Counties where forests could be in extreme drought by hunting season. The area of abnormally dry conditions is forecast to expand westward across northern Elmore, Boise, Gem, Payette, Washington and southern Valley Counties as summer progresses. Animals stressed by excessive heat and dry conditions will increasingly either move out of these areas due to competition for limited food and water resources, or move closer to manmade options in the form of stock ponds, crop fields and irrigated farmland. Seeing as these areas entered peak antler-growth challenged in the food and water categories, trophy production may not be as good in central and southern Idaho as in other parts of the state…

Colorado: This state had the more square miles in in extreme drought conditions than any other western state as summer began. Every location south of a line from Grand Junction to Canon City to Akron to Burlington was in severe to extreme drought, and had been for some time. Conditions are forecast to worsen across a good chunk of Colorado west of Interstate 25 until hunting seasons begin. But there’s a part of the state that could improve.

Long-range models suggest the eastern quarter of Colorado, including severe drought areas of the southeast, could benefit from above-average rainfall into mid-August. It won’t be enough to end the drought in the southeast, but at least it’s something. But the models also forecast intensifying drought in hard-hit areas of south-central and southwest Colorado, including all of San Juan National Forest. With extreme drought will also come extreme fire danger so don’t be surprised if bans on open fires are in still effect when hunting season arrives.

Wyoming: From a weather standpoint, Wyoming is looking like one of the more favorable western states this fall. La Nina development should keep the main storm track northeast of the state, allowing fall hunters to enjoy some mild days in the woods, and drought conditions were not as severe during summer’s first half as they were in other states.

Above-average precipitation is forecast through the summer east of a line from the Big Horn Mountains to Laramie, and that should mitigate dry to moderate drought in those areas. Late spring snows in the southern mountains gave a fresh shot of runoff to streams and rivers in the southeast part of the state. But rainfall was forecast to be below average south of Interstate 80 from Laramie to the Utah state line so drought conditions there will be on the increase.

Wyoming is known as a gold mine for trophy bucks and bulls and the weather outlook for hunters is favorable this year. There are two parts of the state worth calling out not only because the moisture situation should be stable, allowing for optimal browse and antler growth through the summer, but also because not many people think about them when applying for tags.