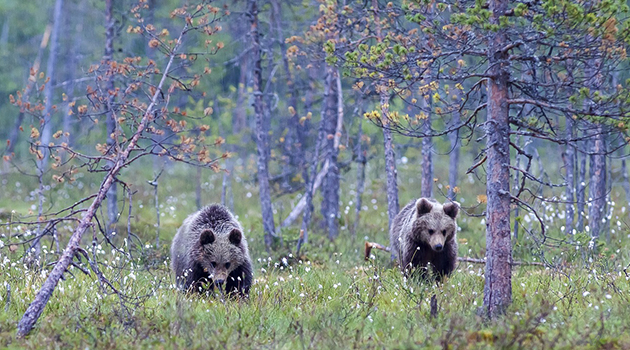 When I use the word “rockstar” I don’t think of grizzly bears. In fact, that is the last thing I think of. But if we step back to yesteryear when hair bands ruled the airwaves and their wild partying was the stuff of legends maybe “rockstar” is the appropriate title to give to a grizzly bear that feeds its four offspring from the trash of high end Jackson Hole neighborhoods. Or teaching it’s Cubs that beehives are an appropriate delicacy for their entitled, endangered lives. Much like the rock stars who trashed hotel rooms these bears are certainly crashing the party in Jackson Hole. Even better is that 399 has her own twitter feed and instagram accounts documenting her life. How she manages to run those accounts without opposable thumbs is rather curious. Maybe she employs social media strategists?

Even though the sarcasm is strong in this article, the humanization of animals has done far more to harm animals than help. I mean what is the difference between a rockstar bear and Axl Rose misbehaving? The difference is, the bears are just being themselves and will do what is necessary for survival. She is an aged bear who at this juncture has one goal and that is to live a little longer and make sure her cubs survive after they leave her. Rockstars on the other hand knew better but did it anyway because you know, their reputations and ego needed it. Bear 399 is doing her best to ensure the survival of her cubs but is in turn putting them in future jeopardy. Bears will be bears and just being herself, 399 may end up putting her entire Motley Crue in the crosshairs.

How is she putting them in danger you ask? She is teaching them not to fear humans and in turn that a trash dumpster filled with all kinds of goodies with a side of beehive honey fresh off the comb is a good choice. In reality this is a very bad choice for the famous bear. The end result, in late October those behaviors turned into multiple agencies having to “harass” her to leave Jackson and push her away from potential areas of conflict. The bigger problem is that she is teaching four more bears to do the same and at some point this will result in conflict, at a minimum, injury and at worst, death for someone living or visiting Jackson and the bears being euthanized for their behavior.

This is where her status as a “rockstar” gets complicated. A bear doesn’t operate like a human, we can’t put her in bear jail or rehab. Once habits are formed it is nearly impossible to end them. The worst part is that someone likely fed her and taught her the behavior. This ends in 399 and the cubs meeting an early demise or being moved with another strike against her name for “bad” behavior.

Therein lies an even bigger issue, she has a rap sheet a mile long. This isn’t the first time that she has been escorted away from human dwellings and development, in fact it may be as many as 10 times. Is 399 getting a bit more grace than the usual three strike rule that most grizzly bears get? My gut says probably, would you want to be the person who takes the “rockstar” in for the death sentence? I know I wouldn’t and honestly I feel for the agencies that are having to deal with this mess, it isn’t pretty.

Bottom line, if we want to make a dent in these situations we need to fight for delisting and work to turn grizzly bears back into the game animals they are in the hearts and minds of people. If she has to be euthanized it will end with protest from the same people who likely fed her and the cubs. Chances are she would be raising these cubs at a higher elevation, prepping for her long winter nap far from this danger if she hadn’t learned about easy food sources provided by humans.

What say you? How do you think the situation ends?