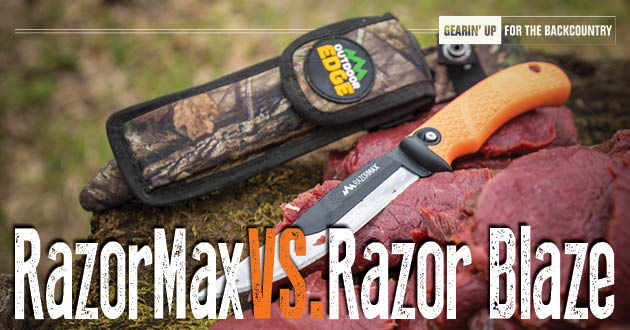 The fixed-blade knife is called the RazorMax. It has the option to interchange the 3.5” drop-point blade (from their popular RazorSafe series) with a 5.0” fillet/boning blade. This is a complete replaceable-blade system knife for virtually all of your hunting, fishing and culinary needs. The total length is 8” with the 3.5” blade and 9.5” with the 5.0” blade. It weighs in at 4.7 ounces with the sheath (2.6 ounces without the sheath) and comes with three of the 3.5” blades and three of the 5.0” blades. The RazorMax is $79.95 at www.outdooredge.com.

The original folding-blade knife that Outdoor Edge came out with is the RazorBlaze. It comes with the 3.5” blades that the RazorMax comes with, but not the 5.0” fillet/boning blade. The obvious benefit of the folding knife is that it takes up less space in your pack, measuring just under 4.5” when closed and has an overall length of 8”. It weighs in at 6.4 ounces with the sheath and comes with six of the 3.5” blades. The RazorBlaze is $56.95 on www.outdooredge.com.

The blade replacement systems are the same when comparing the fixed blade RazorMax with the folding blade RazorBlaze, using the patented RazorSafe technology that allows you to replace the blades, without risk of injury, by the simple push of a button. The blade holder is steel and is black oxide coated for durability and good looks for more years than you’ll be alive to use it.

Both handles are rubberized and ergonomically designed for a better grip during field use and come with a sheath.

One of the features we love with the whole RazorSafe family of knives from Outdoor Edge is that even though the blades are replaceable, they are also really easy to sharpen and reuse again and again. If you aren’t the best at sharpening your own knife, they have an amazing little knife sharpener that will touch up the replaceable blades (or any other blade you have). It is called the Edge-X Pro Sharpener and is only $18.95. It has coarse carbide, medium carbide and ceramic sharpening options, plus a swivel carbide rod that sharpens serrated blades and fish hooks.

Successful Bowhunters: Brian Schiermeister
How to Become a Better Bowhunter