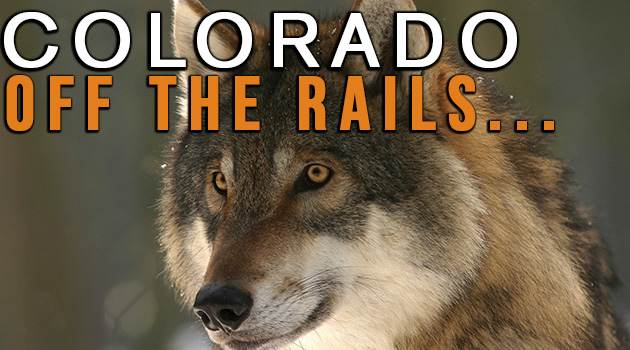 Has the Colorado Parks and Wildlife Commission gone completely off the rails?

If you are not aware of some of the latest controversial policies and directives of the Colorado Parks and Wildlife department; overhunting a struggling mule deer herd into oblivion during the late season is, well, just the beginning of the story.

On the first day of February the Wyoming Game and Fish department was tipped off to an apparent wolf capture going on by the Colorado Parks and Wildlife Commission inside Wyoming’s borders! Needless to say, this is a huge, and I mean HUGE no-no. When it comes to wildlife issues, states are almost treated as their own sovereign nations and to have one state conducting wildlife operations inside another state’s borders without a very detailed plan and agreement in place is, let’s just say, highly frowned upon. Particularly when it comes to situations as controversial as unauthorized wolf reintroductions.

The incident occurred while a CPW team was attempting to capture and collar a wolf inside the northernmost reaches of the state of Colorado with a helicopter, a tranquilizing dart and a net gun. A pretty standard procedure here in northern Wyoming, but new to the Colorado CPW. Apparently, the darted wolf frantically ran into “enemy” territory toward possible safety and across the state line about one third of a mile into Platte County, Wyoming, therefore making it now a Wyoming wolf. Not to mention a Wyoming wolf inside the predator zone where wolves can be hunted 24/7 with no license required.

The CPW continued their wolf capture, where the wolf was finally run down, collared and released back into Platte County, Wyoming. The Wyoming Game and Fish was quickly notified of these troubling developments, but could not respond before the wolf was released about one third of a mile inside Wyoming’s borders.

The Wyoming Game and Fish Director has since contacted the Director of the Colorado Parks and Wildlife Commission regarding the details and possible legalities of the incident. There’s no telling what might come from the situation at this time, but you can rest assured, that the state of Colorado is very, very serious about wolf reintroduction and the folks in southern Wyoming will surely be less than pleased at these latest developments.

We will have more on the details of wolf reintroduction in the state of Colorado soon.

How to Motorize Your Fishing Kayak
3 Jaw-Dropping Bow Season Bucks That Scored O 200 ...