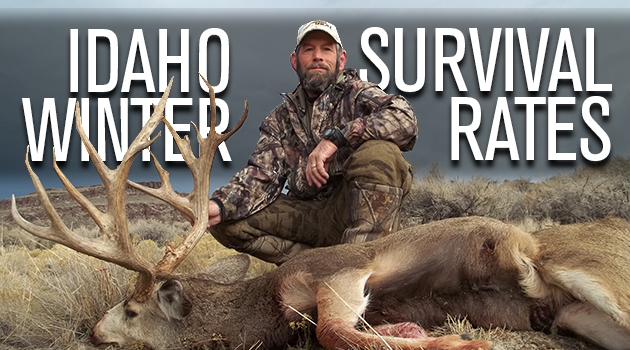 The past winter was hard on the deer herds. Snowfall in most areas was well above the average, and the storms made more difficult browsing for the deer. In response, each spring, Idaho Fish and Game captures and collars does and fawns across the state. This monitoring provides vital, real-time information allowing biologists to react to changing herd sizes quickly. Fawn mortality was expected to be extremely high in some areas.  In response, Fish and Game eliminated antlerless general season hunts in the following units: 48, 49, 52, 66A, 68, 70, 71, 72, 73, 73A, 74, 75, 76, 77 and 78.

Idaho Fish and Game seemed to fear the winterkill would devastate deer herds. These fears were well founded, as fawn survival rate was the second-lowest seen in 20 years. However, the mortality was much lower than early projections.

About 30% of radio-collared fawns and 90% of collared does survived the harsh conditions last winter with deep snow and frigid temperatures on low-elevation winter range.

In the past 19 years, the lowest survival rate was in the 2010-2011 winter, when only 26% of collared fawns survived. Over this period, the average survival rate has been 57%, almost double the survival from this past winter. Although not the worst season on record as some expected it to be, last winter definitely did some lasting damage to mule deer herds going forward.

As you would expect, the severe winter weather hit some places much worse than others. This lead to certain parts of the state which saw almost complete fawn mortality, while other places had a high survival rate.

The McCall/Weiser area had the lowest survival rate of only 3 percent of collared fawns surviving winter, while the Smoky/Bennett area and South Hills in south-central Idaho had 60 and 57 percent survival, respectively.

Winter was relatively normal north of the Salmon River in Idaho’s prime whitetail country. Whitetails continue to be an integral part of Idaho’s deer population and account for more than 40 percent of the annual harvest.

North and north/central Idaho’s winter weather was closer to average than southern Idaho’s. Whitetails tend to have high birth rates of twins where they have good forage, and they tend to bounce back quickly after winter losses.

The immediate impact of the winterkill will mostly be felt by hunters who target does and young bucks. After the harsh winter of 2010-2011, overall statewide deer harvest declined about 6%.

Mature buck hunting will likely still be good this coming season.  Fish and Game survey indicate a strong survival rate for mature bucks. High snowfall can mean a very wet and green spring and summer as the snow melt lasts longer into the year. These conditions are ideal for bucks to get enough nutrition to maximize their genetic potential. However, in places that suffered a high winterkill, there will be a gap in the age class.  In 4 to 6 years it will be harder to find mature bucks. Keep this in mind when planning your hunts this fall and into the future.