How Good Is A Turkey’s Eyesight, Really!

A few years back, I sat in a ground blind on Robert Hoague’s Texas hunting lease and bowhunted for wild hogs. Right after first light a sizeable flock of wild turkeys moved into the area. I was sitting in the rear of a darkened pop-up ground blind as they fed and walked within 2 feet of my open blind windows. It was a rush and I learned something.

The winter flock had a few jakes mixed in but was mostly hens. The jakes stayed only a few minutes. I think the jakes were trailing the hens. The feeder where I was sitting hadn’t been sat in for months and they are never hunted near the feeders in the spring. In other words, the wild turkeys had no bad history with the blind or hunters. But boy, were they alert.

Turkey eyes are designed to detect predators. Understanding how their eyes work will give you an edge.

Turkeys are a prey species. Coyotes, foxes, bobcats and hunters with turkey tags routinely hunt them. They must be alert at all times. Wild Turkeys are uniquely equipped to detect predators. With turkeys, the eyes have it. They can see at least as good as a man with 20/20 vision but even more significant they can see more of the spectrum than we can.

That morning before I left the blind a pair of grey foxes walked by the blind. The turkeys saw them coming and ran off as if someone fired a starting pistol. Wild Turkeys have a very poorly developed sense of curiosity. If something looks even a little bit fishy, they simply leave. 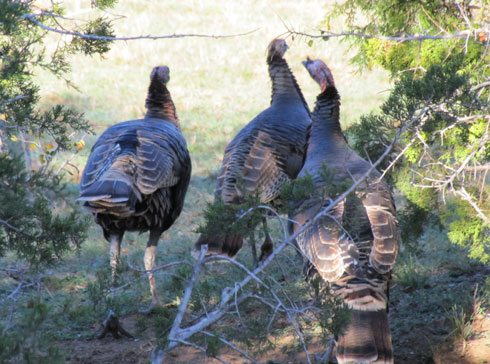 The hen in the center and the one on the right can both see you. If you can see
their eye, they can see you.

The wild turkey’s eyes are set on the side of the head which offers them monocular vision. That is in contrast to our binocular vision where each eye sees the same scene from a little different angle. To get depth perception a turkey must turn its swiveling head a bit and see the scene from the other eye. And they can do this quite well. They can see a 270-degrees field of view without moving their head.

Therefore, when they move their head only a ¼ turn they can see 360. The next time you see an unalarmed wild turkey at close range watch its head. It is constantly moving from side to side. They are watching 360-degrees. 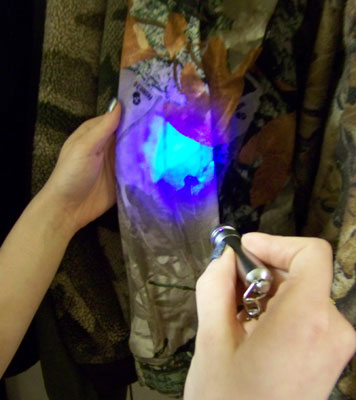 Check your camo with a black light. If it glows blue, you have a project ahead of you…kill the UV.

The really unique ability they have is to see into the UV spectrum. This means they see all of the colors of the rainbow plus they can see the blue glow your camo may be emitting. You must understand that UV-brighteners gather in and concentrate UV light and re-radiate it as blue. These brighteners may come already imbedded in your camo turkey vest before it left China. On the other hand, you may have washed your camo pants or shirt in Tide, Cheer or All and now you are glowing blue to a turkey’s eyes. Not much blue out there. Don’t let it be you. 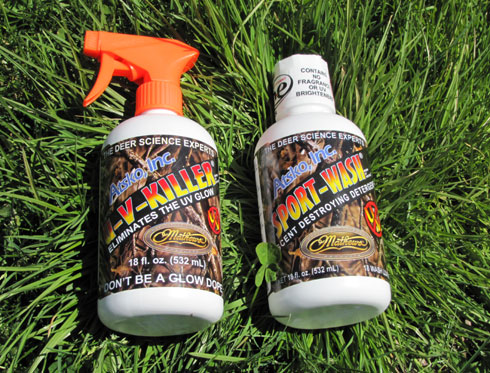 You should always treat your turkey hunting camo with UV-KILLER by Atsko. Recently, Mathews picked up the entire Atsko line www.atsko.com  and it is now available in Mathew’s Bow dealer shops. The label now has Lost Camo on it. To treat your camo… first wash in Sport-Wash and then spray with UV-KILLER. After treating, as long as you only wash your camo in Sport-Wash the UV-glow will be gone once and for all. 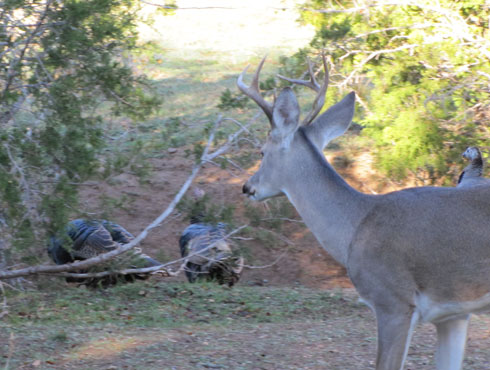 While I sat there motionless in Robert’s ground blind and many of the turkeys left, a buck walked in. The turkeys had seen it approaching but paid no attention to it. Once it made it to the corn two hens actually charged the young buck and backed it up, nonverbally saying …my corn, find your own. Although the buck weighed more than the remaining wild turkeys, he gave ground. 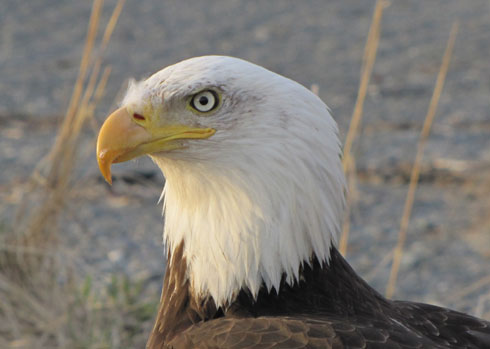 I caught this bald eagle blinking with his nictitating membrane. Note his clear eye in the one pic and the smoky membrane over his eye a few seconds later. Turkeys have the same membrane.

Another interesting eye feature, a wild turkey eye has is a nictitating membrane, which acts as a transparent eyelid that flicks cross the eye every few seconds. It allows the turkey to blink without losing his view for a millisecond. The membrane also keeps the eye lubricated. Although I have not filmed the nictitating membrane at work in a turkey eye, I did get to video the same membrane at work in a bald eagle last summer in Alaska. It acts as a means to keep the eye moist during windy flights.

If it is your goal to arrow a wild turkey gobbler this spring, I have some info that could prove valuable to you. Turkeys don’t like big blobs of UV-Blue sitting at the base of a tree. Also in the low light environment of a blind UV can shine and give you up. Don’t skip the UV issue.

If you decide to shoot a wild turkey this spring with a bow, I strongly suggest you use a big mechanical broadhead. A wounded turkey can run at speeds over 20 mph and they can fly at 50 mph (for as far as a mile). If your shot doesn’t anchor them, they may become fly-always.

The best shot is to shoot them side to side in the wings close to the wing butt. Slice the wing bones and they will be walking, not flying. Use a big mechanical with a 2-inch blade and your gobbler will likely not go far. A wild turkey has over 600 feathers but the ones you are trying to cut are 10 or so flight feathers on each wing. Breaking a wing bone is critical to impede flight. The target size is only as big as a tennis ball. Like a deer, a heart lung shot will do it every time. If the broadhead and arrow stays in the turkey, it further impedes flight.

Those are a few turkey facts that will make your hunt more successful this season. Understanding their strengths will make you more effective. Don’t buy into the chatter that wild turkeys are brilliant birds. They simply have a well developed set of defense mechanisms to protect them against predators. Now that you understand some of them, you are their equal. Go arrow a gobbler.