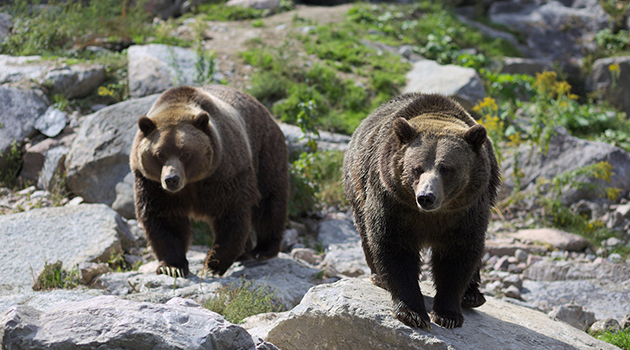 Last week a 450 pound male grizzly bear was euthanized by the USDA after it was confirmed that it killed a beef cow in the Big Snowy Mountains south of Lewistown. That’s right, Lewistown! This is way outside the current home range of Grizzly bears in Montana. The Snowy Mountains are located in east central Montana which are way east of the Belts or Judith Mountains which aren’t known to have grizzly bears either. Montana FWP said the bear was reported the week before after a remote camera captured it on a cattle carcass. Traps were set and the bear was caught with two more cows falling victim to the grizzly. It was determined the bear was about five years old and because of the location, age and sex of the bear which helped officials determine for it to be put down.

This has been the furthest east I’ve heard of a grizzly bear showing up in Montana. DNA from the bear will be used to determine where he came from. This is a classic sign of a young boar being out competed in his home territory so he traveled a great distance looking for females and for a new home range. This is a sign of high densities of bears in their current territories which forces young males out and has become more and more common the past few years. We have seen wolves do the same thing, an example being male wolf (OR-93) traveling over 1000 miles to California from northeast Oregon. A couple years ago another young male made the same route and was found shot dead in California. That mystery still remains unsolved.

As grizzly populations grow across their traditional homerange, expect more and more of these occurrences to happen. Spring time is the busiest time for wildlife officials as dozens of livestock bear conflicts across the West end up in relocations or euthanizations.