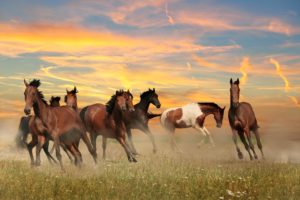 The fact is, that left unchecked and unmanaged, feral horses out compete mule deer and pronghorn for precious resources, plain and simple. In an era of mule deer decline and plummeting pronghorn populations that is quite simply unacceptable. The horses on the landscape of the West are not native and if they have a traceable bloodline it begins and ends with the Spanish Conquistadors. Most feral horses destroying today’s habitat are simply animals that have been recklessly abandoned to eke out a pitiful existence on their own.

The real crux of the feral horse dilemma is that there is no winner. Overpopulated horses destroy precious habitat that ultimately hurts native ungulates, sage grouse, and other denizens of the sagebrush ecosystem including the horses themselves. I have witnessed this first hand on hunts for sage grouse, antelope and mule deer. Trampled springs and water holes that no longer provide sustenance for anything, decimated sagebrush that will likely never recover from horses eating it to death and sickly, malnourished horses that are shadows of what they could be under the human care they deserve.

It’s not pretty and it’s something that the Disney-fied, overly-romantic and largely urban horse activists don’t understand because they don’t live here and are ignorant of the truth. That truth is that feral horse management is vital to ensure healthy ecosystems that support native animals such as mule deer and pronghorn and those animals need help now more than ever.

I recently received an email from a retired state wildlife biologist who attempted to archery hunt antelope in a blue-chip unit here in Wyoming that he’s successfully hunted in the past and enjoyed immensely. After two days of scouting he called off his hunt due to an alarming lack of pronghorns among a virtual sea of feral horses. Waterholes and springs were trampled, sagebrush was destroyed and feral horses in various states of poor health wandered the once bountiful area. He implored me to shed some light on the issue and having been witness to the same things I felt inclined to do so.

Feral horse management can take many forms, from holding and adoption facilities to contraceptive darting. I’ve got my own ideas on how it should be done but I’m dying to hear yours… let ‘er buck!

Fast and Furious Crossbows
RVers Favorite Camping Gadgets and Where to Find T...