Did The Wyoming Tag Price Increase Help You 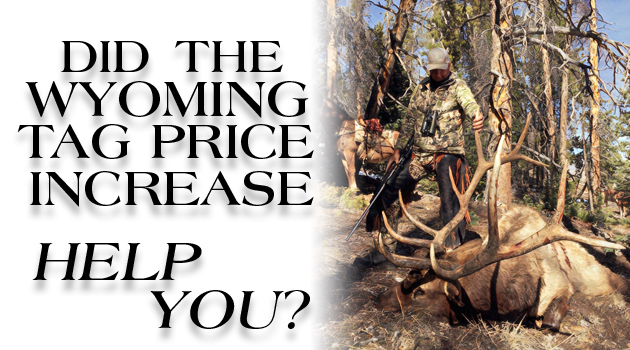 By now most of you know the Wyoming Game and Fish Commission increased the cost of an elk tag by 20% for the 2018 draw. Based on many conversations this winter with nonresident applicants there was an inherent hope that the price increase would taper off the demand for such tags in the draw thus making the odds at drawing a tag better. Many might ask, did this work? The answer is no. Proving yet again that price increases do NOT correlate to increases in draw odds and to think otherwise is nothing more than wishful thinking.

So how did we get here? In 2017 the legislature of Wyoming was forced to make major budget cuts to nearly every single state agency, and the Game and Fish was not immune. The state chose to remove all “general funding” for the Department, and in turn chose to approve a license fee increase to compensate-lucky us.

When the dust of the nonresident draw settled and all the money was counted the state was able to increase the price of an elk tag by a whopping 20% and in return saw a 10% increase in elk applications in the process versus 2016. Yet again proving the fact that Wyoming has some of the most valued elk hunting in the entire country.

In January, nonresident elk applicants placed 23,080 applications for a mere 7,250 full price available elk tags. This equates to a generalized gross drawing odd of more than 31%, and a whole lot of money, something to the tune of more than $7,000,000. Not a bad boost to the Game and Fish budget. The 20% price increase accounts for nearly $1.5 million worth of that revenue alone-and that’s just the elk draw.

However, before you let your fiscal anger fully take hold, let’s dig a little deeper into the numbers. Based on the Game and Fish’s own draw data, the state saw less than a 1% increase in applicants for the highly coveted Type-1 and Type-2 bull elk tags. These are the tags that require preference points to draw and are usually the tags most of us watch so closely. In the end, very little demand increase was seen for the bull elk tags we all seek so desperately versus the 2017 drawing-pre-price increase. As a result, a 21% increase in demand was seen for the cow/calf licenses for the 2018 draw season which equated to an incredible 43% increase over the 2016 draw.

We all hope this trend does not spread across the entire West, as fund-strapped game departments throughout the region struggle to make budgets balance with declining wildlife populations and ever increasing public access issues for hunters.