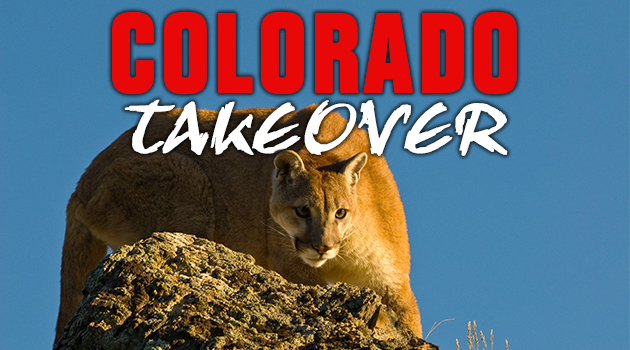 In some areas, nearly half of Colorado deer and elk hunters reported seeing mountain lions or tracks while they hunted last year. One CPW supervisor told me an outfitter with 18 camps said that every camp reported seeing lions or lion tracks.

When hunters are seeing mountain lions, there are way, way too many lions. The problem is that it is not politically feasible for CPW to hire professionals to cull the lions and so they have to rely on hunters to do it but they are not seeing the harvest of lions they want to see. The result? Many areas with big reputations are not keeping their older deer class high enough to justify the points.

For example, Unit 44 is one of the areas where seeing a lion is a real possibility. It takes a lot of points to draw 3rd and 4th season but the decline in trophy bucks in 44 has been much greater than people realize. The culprit seems to be too many lions, with bears not far behind.

The official mountain lion estimate is 4,000 – 5,000 mountain lions in Colorado with a density of one lion for every 10 square miles (a square 3.16 miles long and wide). Not only is that probably low, but you can bet that the number in good habitat is much higher and if you glassed a mile or two in every direction, there were probably two lions in that circle.

The deer predator problem is so bad that the State dropped its nonresident bear license to $100 last year so that hunters would buy it as an add-on tag just in case. The pickup in bear tags sold was very strong. I told CPW recently that they need to do the same with lion tags, which are currently $350. Don’t be surprised if you see a price drop on them next year. They should also start the lion season much earlier than the current mid-November date.

I like houndsmen tracking down these lions and I wish them all the business they can get, but if I can put a lion on my wall myself while I’m hunting deer or elk I am all for that. I plan to buy a bear tag this fall but I’m hunting too early for a lion license. I hope you’ll buy one. It is probably the only way we are going to put a dent in the out-of-control predator problem in Colorado. And now they are voting on introducing wolves, crazy?1?

The Secretary of the Interior on Climate Change, W...
Montana’s Drawing System Change