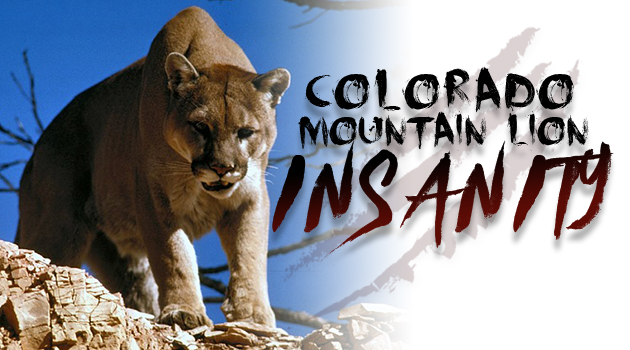 Cougars on the Attack!!!

Lucky, very lucky. On February 4th a trail runner in Northern Colorado was attacked by a cougar. While the attack in and of itself is somewhat surprising given the rarity of the occurrence, the fact that the guy was able to choke out the cat with his bare hands is certainly the most incredible wrinkle in the story.

A bear attack is one thing, a cat is an entirely different story. A bear attacks with brute force, overwhelming weight and smothering aggression. A cat on the other hand is one predator I certainly hope to never go toe to toe with. A cat attacks to kill not to intimidate like a bear most often does. A cougar attacks from behind with lightning speed and precision; claws so sharp and curved they act like Velcro on your clothing and skin, all the while the cat muscles you around into the perfect position for a death bite to your skull or spinal cord. Anyone who has hunted cats with dogs has seen the incredible agility and force these animals are capable of first hand, and it is beyond impressive. I won’t go into the fine details of such here, but let’s just say for a cat to outright crush a dog’s skull with one bite is well within the realm of reality, and a single swipe of a paw can all but remove the entirety of a dog’s face and knock his eyes out of their sockets. These deadly animals are certainly not child’s play and when they drop into kill gear, they phase into a trance that is unlike anything else in the animal kingdom. The eyes of an attacking cougar roll back inside his head for protection and it is, kill or be killed-no turning back. Lucky for this guy it was, be killed.

Having skinned out my fair share of cats, I can say with nearly 100% surety this guy was lucky. Lucky this cat was an adolescent, possibly even a female. A full-grown man can and obviously did stand a chance with his bare hands against a sub-adult cat probably weighing between fifty and eighty pounds in live weight. Had that cat been a full-grown male, this story would more than likely have been much different. As if killing a cougar with your bare hands was not spectacular enough, killing a full-grown, 160-pound tom with your bare hands would be an entirely different endeavor altogether. Not really a “hold my beer and watch this” type of YouTube event.

The killing efficiency of a cat that big is beyond most human comprehension and comprises a mauling grab from behind that pins your arms at your sides, claws sink deep into your chest and calves all while 160 pounds of live weight smothers you to the cold, hard ground with a groaning exhale as the warm breath of a hungry beast perks the hair up on the back of your neck just before the lights go out for good as four, two-inch canines puncture the spinal column at the base of your skull. Very few if any humans would be strong, or quick enough to fend off this kind of advance. Lucky for us, these big, mature cats are usually too effective in the wild to bother with human prey. A big male cat is beyond human consumption, he’s too big, too quick, too lethal and too smart to put a human being on his menu. Killing a deer, elk or sheep has become almost too easy for him. This leaves humans to the most desperate of cats, the outcasts. Younger adolescent cats of both sexes that have been recently kicked out from their mother’s oversite, forced to hunt and fend for themselves for the first time in life. These and the very sick are usually the cats that create such a stir in the human world, and thank goodness for that. This is what gives those who don’t know any better a mere chance at survival. A survival that usually depends on remedial weapons such as rocks, sticks and bicycles, even if it means choking a cat out of being with a bare set of human hands. A chance to walk away, to tell the tale, and what a tale it will be.

Over population of apex predators in North America is a very dangerous reality in today’s world. Many states have overly limited or even outlawed predator hunting altogether. This goes beyond the normal bounds of wildlife conservation and often pits predator against human, but in the end, we both lose.

Case in point, the state of California outlawed cougar hunting decades ago, bleeding hearts with little to no outdoor experience and an even a more remedial understanding of the concept of wildlife conservation voted to side with the cougars trying to save the species from sure extinction in California, or that’s what they were told by their environmentalist, animal rights masters. Most of them had never seen a cougar, so they must be rarer than a snow leopard or a Mexican jaguar, right? It turned out California had more than their fair share of cougars.

When the dust settled half a decade later, the cougars had over populated to epic proportions, which in turn decimated the prey sources in the mountains and forests where they belonged, leaving the most abundant prey source, in and around neighborhoods and housing developments. Now the cats roam the streets at night in and around places like Los Angeles, Sacramento and Oakland, causing conflicts with humans, pets and livestock. This year the state of California will kill more cougars than hunters ever did any year before hunting the species was outlawed decades ago.

This undercover predator control program will cost the taxpayers of California millions of dollars, in a state that is financially broke. Mountain lions and citizens both lose under these circumstances. Whether it be life, property or money, proper balance is critical to our natural world. A balance that is best and most efficiently achieved through hunting and sound wildlife conservation, this is the North American conservation model, and it has been proven throughout the world over and over again. Our system’s effectiveness cannot be denied or refuted by logical human beings, ask Kenya, Namibia and Tajikistan.

Now, I’m not saying more cougar hunting would have prevented this incident, but for the most part, only desperate predators attack humans, ones that are starving or territorially challenged. The best and only long-term solution to apex predatory control is sound and scientific population control managed through the use of regulated hunting. This is the only way to ensure the long-term viability of the species and its prey. This goes for wolves, grizzly bears, black bears and of course cougars.

It’s a slippery slope for many of these hunts throughout the West however; first they outlaw spring bear hunts, then they outlaw bear baiting, then trapping, then cat hunting with dogs, then coyote hunting and calling, and then, well… use your imagination for the next step and I promise you, it won’t stop there. Just ask the cigarette smokers.

The sad part is states like South Dakota, Oregon, Washington and now possibly Colorado and Montana are following California’s lead. The abandonment of the North American model is happening, in North America! Who would have thought.

Just my two cents for what its worth. Sorry for the lengthy rant, it’s fifteen below zero outside and I’m cooped up. What say you? I am sincerely curious to hear your thoughts and feedback on the subject.