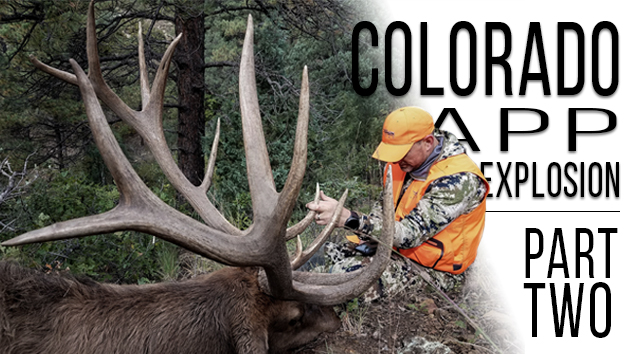 Rocky Mtn. sheep and goat licenses in Colorado exploded this year, 279% and 467%, creating an enormous logjam of new license seekers that will make it far more difficult to draw a license for Rockies or goats in Colorado if you are not already sitting on weighted points.

Last week the results came out for moose, deer, elk, pronghorn and black bear. So, what happened?

If you thought the 467% jump in mountain goats was big, Shiras’ moose applications jumped 567%. Unlike sheep and goats that are in a weighted point draw that new applicants are not eligible for until three more years, moose are in the regular preference point draw and if you haven’t put in by now, you are behind nearly 41,000 resident and over 12,000 nonresident applicants for 444 licenses per year. Good luck with that.

Limited black bear applications jumped 64% and 277%. But, licenses offered moved up 29% or 1,944 licenses. The State feels there are too many black bears but because of the new pay policy not to require license payments upfront the jump in applicants far exceeded the jump in licenses.

The picture starts to get better with the prairie speedsters. Licenses increased 7.7% while resident and nonresident applications were up 23% and 146%. With points for good units already well into double digits, you would think a lot of people would turn to Wyoming, but I suspect nonresidents are already applying there in addition to Colorado.

Now for the big boys. Elk licenses provide a whopping 67% of revenue from the sale of limited licenses by Colorado Parks & Wildlife (CPW). Given that licenses and taxes from the sale of certain sporting goods are by far the major revenue source for CPW, you can see how dependent it is on elk, especially nonresident elk licenses.

The jump for applications for limited elk licenses was pretty tame, relatively speaking – 5% for residents and 33% for nonresidents. That said, elk was the only species that had a decrease in the number of limited licenses, down 711 tags, not counting youth or landowners.

Deer account for 27% of CPW limited license revenue, so add that to the 67% for elk and you can see that 94% comes from just those two species. Bear and antelope are just shy of 4% between them and all the trophy species amount to roughly 1.5%. It may be that those are now the only two species worth applying for if you’re a nonresident just starting to apply in Colorado.

Deer applications were up just 5% and 33%, so the feedback from residents on the new draw policy may not be too negative. As usual, the bar fell heaviest by far on out-of-staters. Add in the fact that application fees for next year go from $3 no matter where you live to $10 for residents and $20 for nonresidents, and you can see that the extra costs for nonresidents just keeps on going and even gets worse. 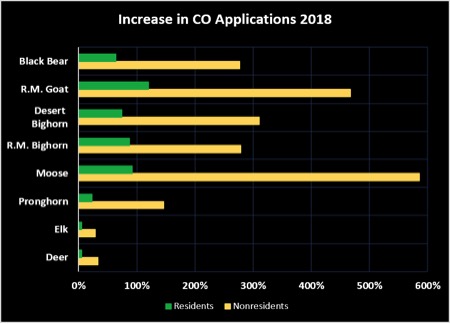 How Did CPW Fare?

Colorado Parks & Wildlife saved $3 million by not processing big license costs upfront. They also generated tens of thousands in new habitat stamp payments times $10 and Lord knows how many extra fishing license sales and increased preference point purchases. But, it was a win for the Department’s revenues and a huge loss for nonresidents on trophy species, including moose.

The Commission is studying all this and forming a committee to look into improving the draw and come up with different ideas.