Want to test your knowledge of archery stalking skills by taking it to the extreme. Spot and stalk antelope hunting with the speedsters of the prairie will do it for you.

At first light I was in an usual situation; switching back and forth between my binoculars and the spotting scope as I watched for a glimpse of an antelope. I had high expectations in this section of public land in my home state of Montana. Last year I had bowhunted a mile to the north, and I was fortunate enough to harvest my first P&Y antelope.

After a year of planning, I decided to stick with the country I know, and hunt the same general area in hope of seeing some of the bucks that I glassed the previous year.

Soon I glassed three antelope bucks and a doe working their way towards a pond. It was still early, and in the dim morning light I couldn’t tell the size of the bucks, so I put my pack on and used a natural fold in the terrain to get out of sight of the bucks and then worked my way around with hopes to cut them off on their way to the water. Soon I was on my stomach cresting over the hill looking out at the group of antelope, but to my dismay, the bucks needed a few more years to reach trophy class. So I just enjoyed watching them for a little bit and saw them feed and water only 50 yards away. 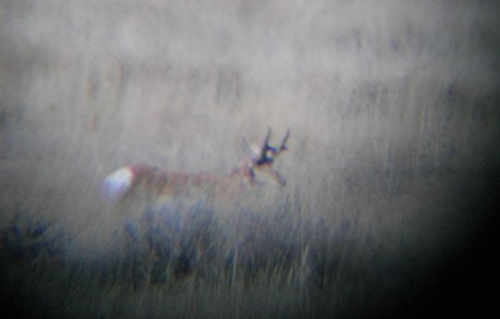 Buck I ended up passing on soon after this picture was taken.

After the group returned to the prairie, I started picking out the sagebrush flats with my spotting scope. After 15 minutes I glassed what looked to be a good buck bedded down with some does.  From this distance I could see mass, and decent digger length.  After determining he was staying bedded down for awhile I turned towards the west to glass some rolling hills, and right away I saw a herd of antelope walking parallel to where I was.  Opportunity knocked and I saw a handful of decent bucks, so I made this herd my focus for the time being. I messed up the stalk, I could still chase after the other buck I had found in his bed.

As luck would have it, a fence was in their way.  If you have ever watched antelope move around, you will soon find out how problematic fences are to them.  Bucks and does always try to find a low spot in a fence to crawl under, rather than jumping over like a mule deer.  I decided I was going to use that fence to my advantage, because any slight edge I can gain with my bow will slowly start to tip the odds in my favor!  I worked my way out of sight, and I started running behind a rise to stay ahead of them while they slowly fed their way to this pinch point.  Using the grain of the terrain, I setup below the herd and belly crawled my way the last 150 yards. 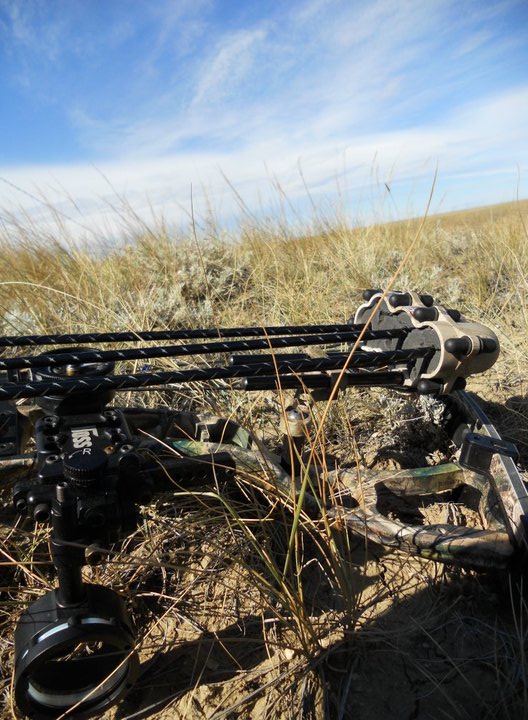 Knee pads are a must for spot and stalk antelope hunting. This is a common sight.

One by one, does and fawns started ducking under the fence, but instead of walking my way they ran out further into the open.  The bucks worked their way to the fence last, so once I saw the largest buck’s horns crest the grass, I got ready. He ducked under and I tried to stop him with my voice. He stopped and while he was looking around wondering what was going on, I quickly ranged him, and moved my slider sight to the correct yardage, aimed, and took my shot at 62 yards.

The arrow found its mark, puncturing both lungs. I gave myself giving a pretty energetic fist pump into the air (every archery knows the feeling!) as I watched the monarch of the prairie fall to the ground.

There was no ground shrinkage on this buck.  Walking up to him, and placing my hands on his horns was a great feeling!  When I first glassed him, I knew he had good hay hooks, but I had no idea he had heavy mass above the diggers, and inch and a half ivory tips. 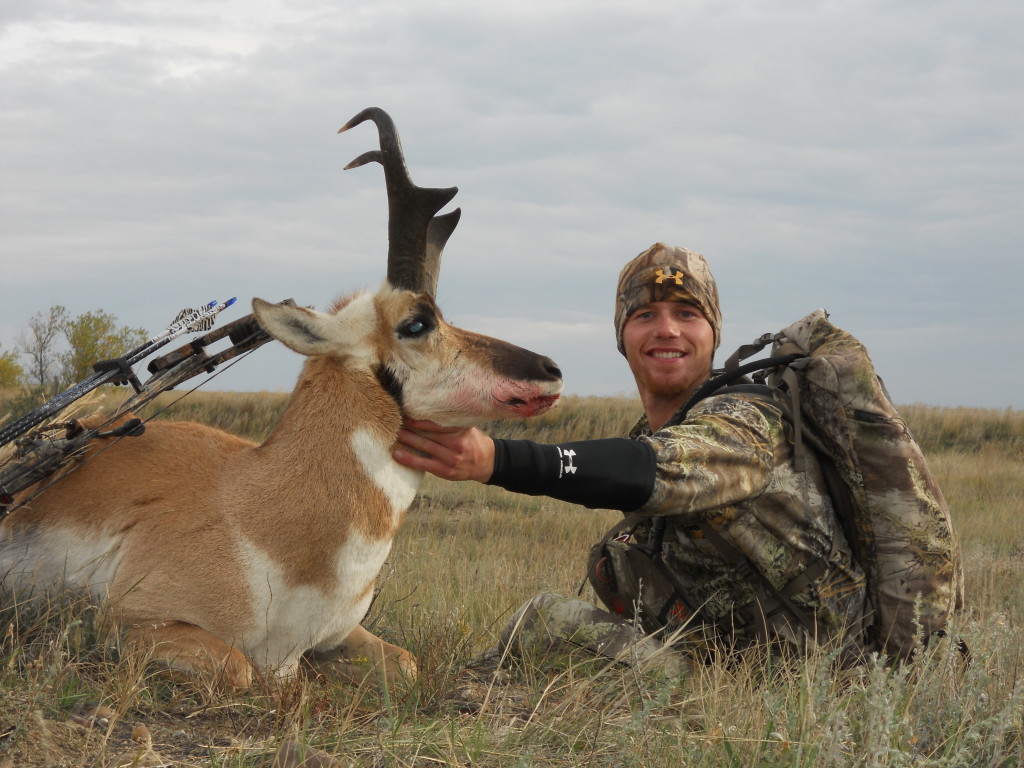 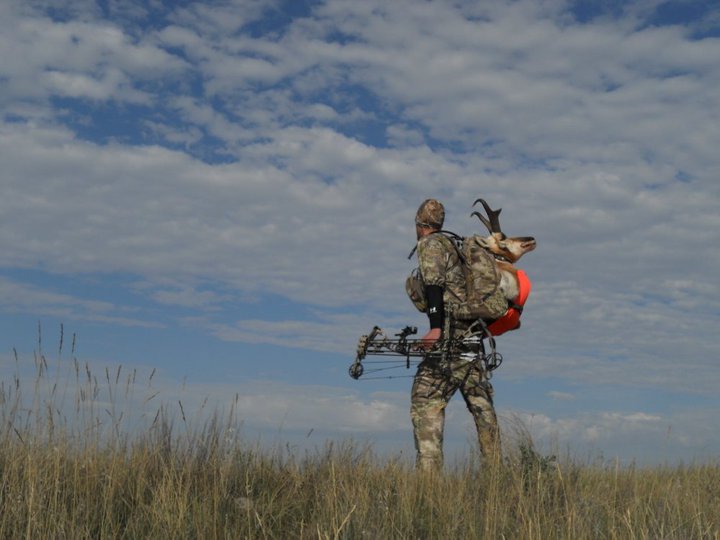 Loaded up with all four quarters, backstraps, tenderloins, and grind meat in one trip.

My buck gross scores 74 inches, and nets 73 3/8 inches P&Y, making this my second antelope to make the P&Y record book two years in a row!!!  Chasing antelope with a bow is an experience not to be forgotten.  Their keen eyesight in the seemingly flat terrain they call home, make them an archery trophy worth the extra effort!! 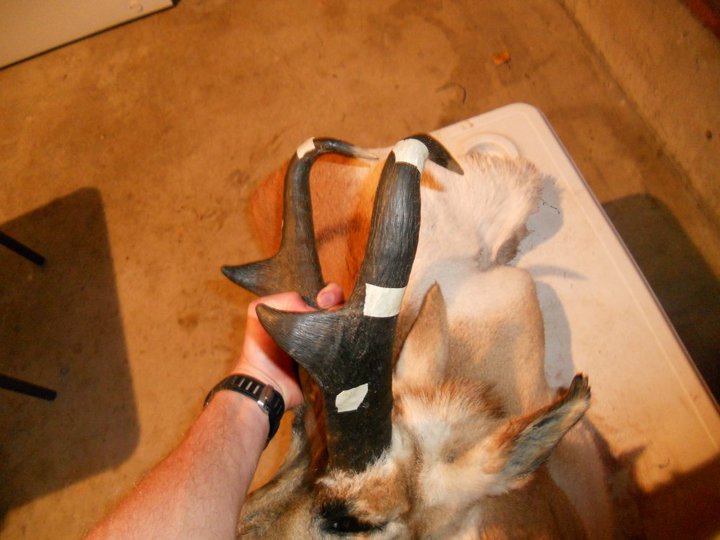 Back at home scoring the buck, this picture you can see the exceptional mass above the diggers.