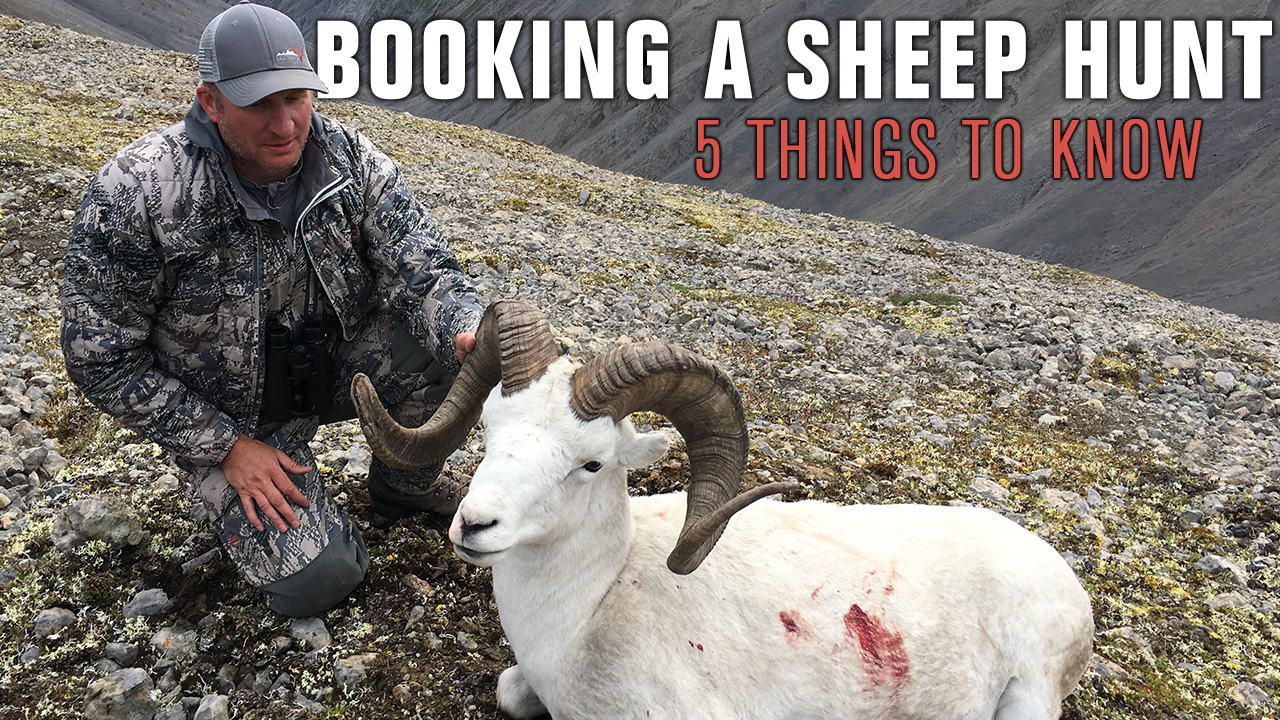 Sometimes lofty expectations can all but ruin a sheep hunt. Sheep hunting is not exactly a value type experience no matter how you cut it. Expenses can pile up fast and almost always swell beyond predetermined levels. Unless you live in Alaska or Canada, most of us are in the same boat – buying points and applying for bighorn hunts while trying to scrimp together enough dough to head North for the thin-horned variety. On these hunts, being in the know is usually the best antidote for cost overruns and expectation loft. Knowing what you are getting into, what you can expect and how much it’s going to cost are all part of the plan when it comes time to book a northern sheep hunt.

These five questions will help you minimize the risks and maximize the rewards of your next sheep hunt. 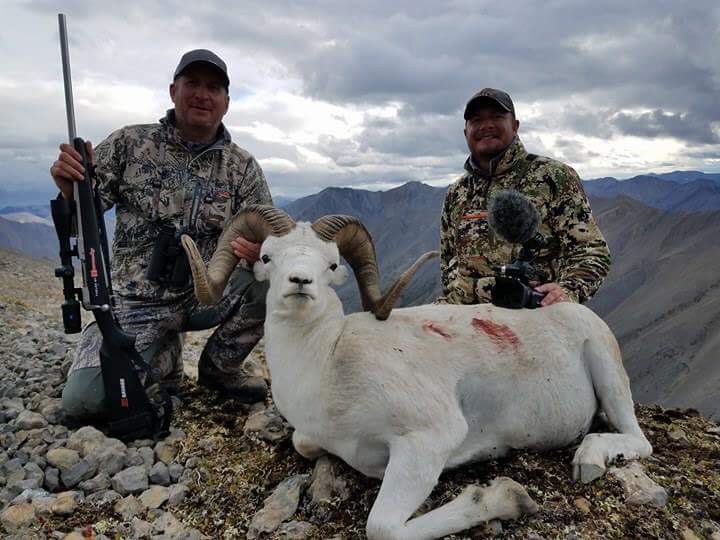 1) What type of hunt is this? There are basically four ways to kill a ram in the very northern reaches of this continent, fly-in, backpack, horseback and float hunt. The first is by far the most common mode of transport to thin-horned ram country- the fly-in.

There are two basic types of fly in hunts – helicopter and bush plane. The bush plane is the most common and less expensive of the two. Most hunts in Alaska and the Yukon Territory are conducted via bush plane, usually a Super Cub airplane. The helicopter has literally changed the landscape of mountain hunting in the North, mostly in the Mackenzie Mountains of the Northwest Territories. These hunts are more expensive but have higher success rates with less hunter effort.

Backpack hunts are probably the least expensive and toughest on the hunter but can be the most rewarding. Most of these can be found in the rugged ranges of Alaska and entail a drop-off by a bush plane to a lake or remote airstrip from which hunters are left to hoof it there to their ram, mostly up a drainage and then straight up to a high mountain peak or basin.

The horseback hunts can be very exciting and a delightful adventure, if you’re used to horses and like some drama along the way to remember the hunt by. Many of these hunts are conducted in the Yukon Territory and are generally combo hunts for sheep as well and moose, caribou and possibly grizzly. These are old school style endeavors and can be a very memorable experience with a log of options and possibilities along the way as far as add-ons and opportunities.

The final and least common is the float hunt. There are some of this type of hunt still conducted in Alaska and the Yukon. A jet boat or raft is used to drift up or down the river while glassing the mountain sides for sheep. Once a band of rams is spotted and sized up, you hike from the river to your quarry. These hunts are very adventurous and the scenery can be beautiful with plenty of opportunities for add-ons and extras along the way, some good and some not.

One other aspect I always like to ask about on a sheep hunt is, will we be hunting from the top down or the bottom up? This is a very critical question and can make a huge difference in your physical abilities and expectations. The helicopter hunts are generally top down type hunts and less physically demanding, while the float hunts and backpack hunts are usually a bottom up experience. The horseback and bush plane hunts can be either or a little bit of both.

2) What is the success rate over the past five years? This bit of information is probably one of the most telling signs of things to come. I’m not saying an outfitter needs to be near 100% success to be quality but you really need to know what you are getting into if you are going to pay the kind of money these hunts garner. 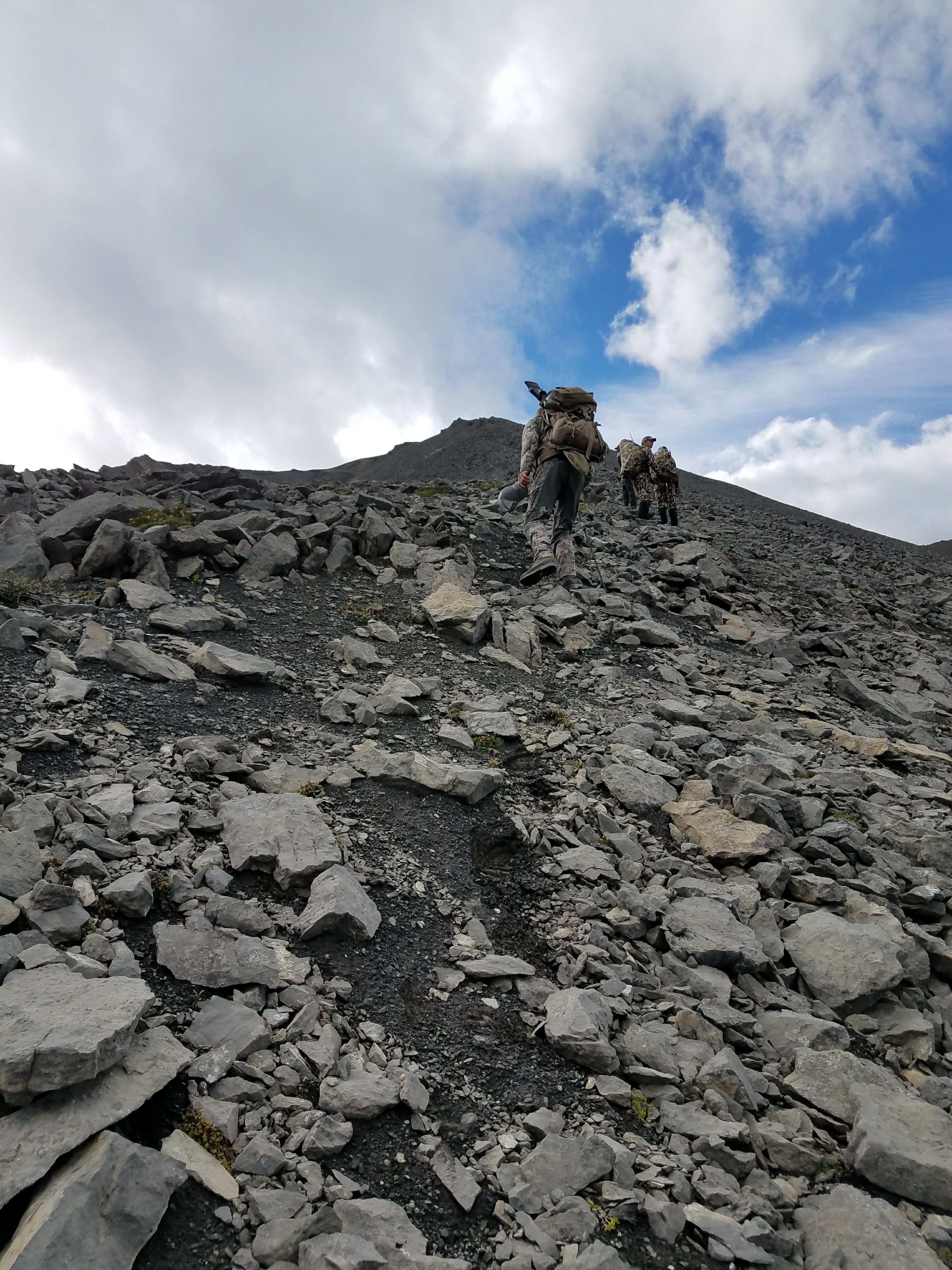 You must also ask yourself a question here. Is this a once-in-a-lifetime hunt for you? If so, you need to find an outfitter that has a very high success rate. If you have the cash and time to go on a few hunts in search of that very special ram or you just love the adventure of the deal then maybe you can handle a hunt that is a 50/50 endeavor.

Keep in mind, there are some very, very good outfitters that have less than stellar success rates, but really kill some giant rams, particularly when you look at Alaska. Also, I like to try and give the outfitter the benefit of the doubt. Sometimes they get stuck with a client or two that just can’t get around very well in the mountains, or the weather destroys a hunt or two completely each year. This can and does happen. Make sure you gauge accordingly. Be sure to check references, more on that later.

3) What size of rams are we looking at for this area? Age or length? I like to try and gauge what type of rams we will be hunting for. A big ram to me might not be a good ram for the area we are hunting and vice versa. Some areas are just known for big rams and others are not.

Another caveat to this is are you looking for length or age? There’s a difference, trust me. A big ram isn’t always a long ram. In Canada most of the outfitters gauge rams by age, no matter the length they like to kill rams that are near or over ten years of age. In Alaska however, many of the outfitters and guides like to classify a ram by his maximum horn length. A 40” ram is a giant ram for most of us, but just not a readily available reality in some places. No matter what you desire, knowing what you are after, and matching that up with what the area generally produces is always a good idea in an effort to reduce disappointment. If anything, your guide is probably going to want to know if you would prefer a 12-year-old ram that is broomed off heavy or a thinner horned ram that flares out nicely on both sides but might only be eight or nine years old. You never know, you might find both in one band or you might save yourself a tough hike for nothing.

4) Resident pressure and accessibility? I always like to get a handle on the level of competition we are dealing with on a hunt. In the States that would be the tag quota for the area, but for a sheep hunt up North that usually equates to the level of resident hunting pressure in the area. This one can be a tough one to get a clear answer on. As a general rule of thumb, this is not as much of a concern in Canada but can be a huge problem for a sheep hunt in some areas of Alaska. The fact of the matter is, for the kind of cash these hunts cost, you really don’t want to be in a foot race with a herd of locals up the mountain to get a crack at the only band of rams in the entire drainage. 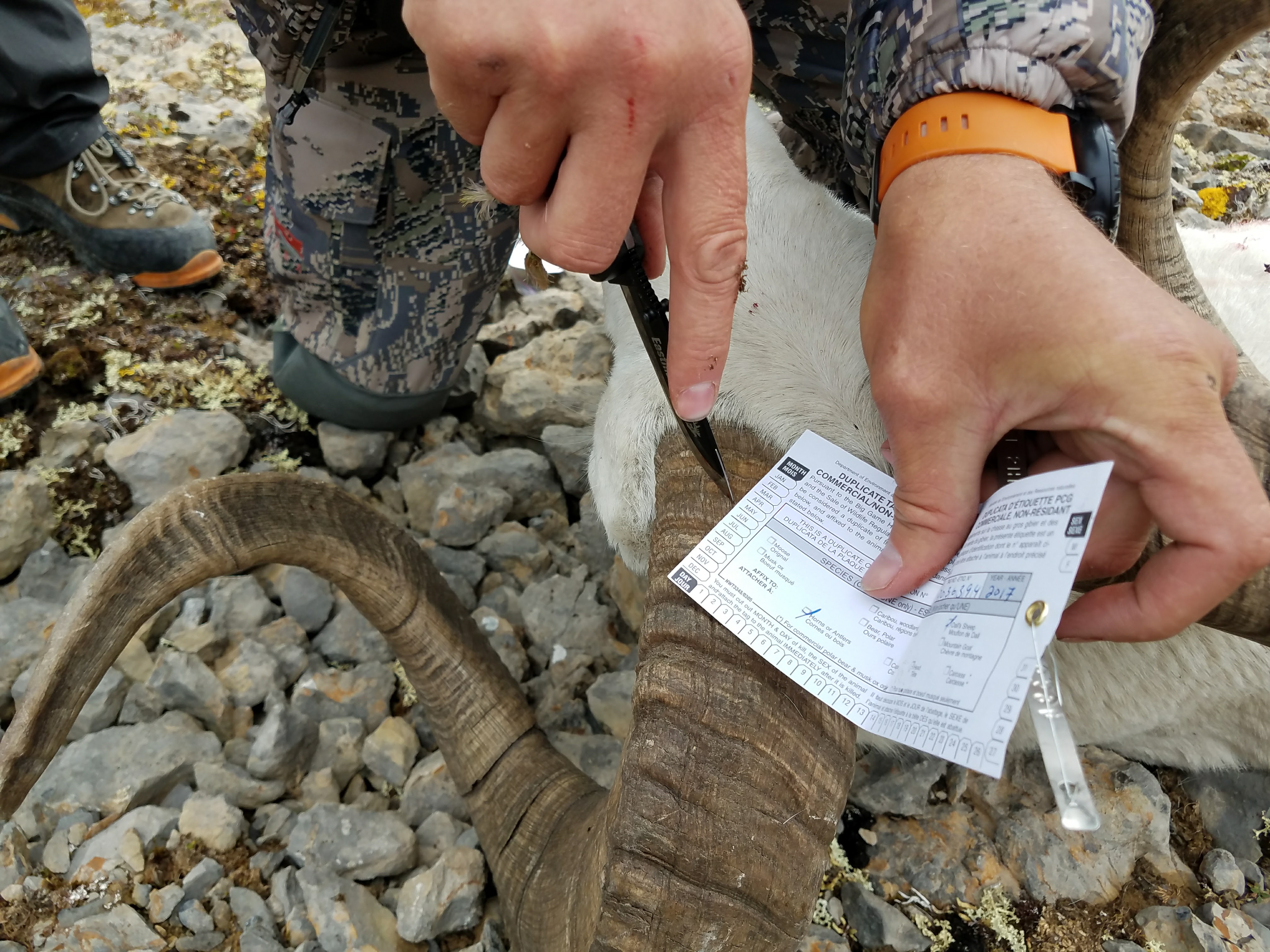 It’s also good to keep in mind that some very big rams can come out of some highly competitive areas from time to time and you always want to make sure your guide and outfitter have pre-scouted the area and a few backup spots ahead of time. It’s just good business for them and that’s what you are paying for after all. I also like to know how many other hunters are in camp as well. This gives you a good measure of what type of operation the outfitter runs in general.

5) Add-ons? I always ask about the potential “add-ons” when it comes to any northern hunt experience. This may mean, additional fly out costs, or the opportunity to add on a caribou for very little extra cost. This can also be as basic as some very surprising fishing options or additional tags to have in your pocket like wolf or wolverine. Many of these are on a best case, or if you’re lucky enough kind of scenario, but I like to know what I am getting into and this can be a very integral part of the hunt sometimes.

There are some additional, let’s call them minor details that I like to get my mind wrapped around and warmed up to before I make a deposit or commitment to a hunt. The first and foremost is hunt expense. I always want to know if there are any additional costs or add-ons that are not included in the hunt. You need to get an idea of where the hunt begins and ends for you and your wallet.

I also like to get a gauge of the general weather conditions of the hunt. For the most part, count on crappy weather, that’s just sheep hunting in the North Country and you need to be prepared for the absolute worst. But I like to at least see what the outfitter has to say about the average weather conditions, that will dictate what level of gear you pack. 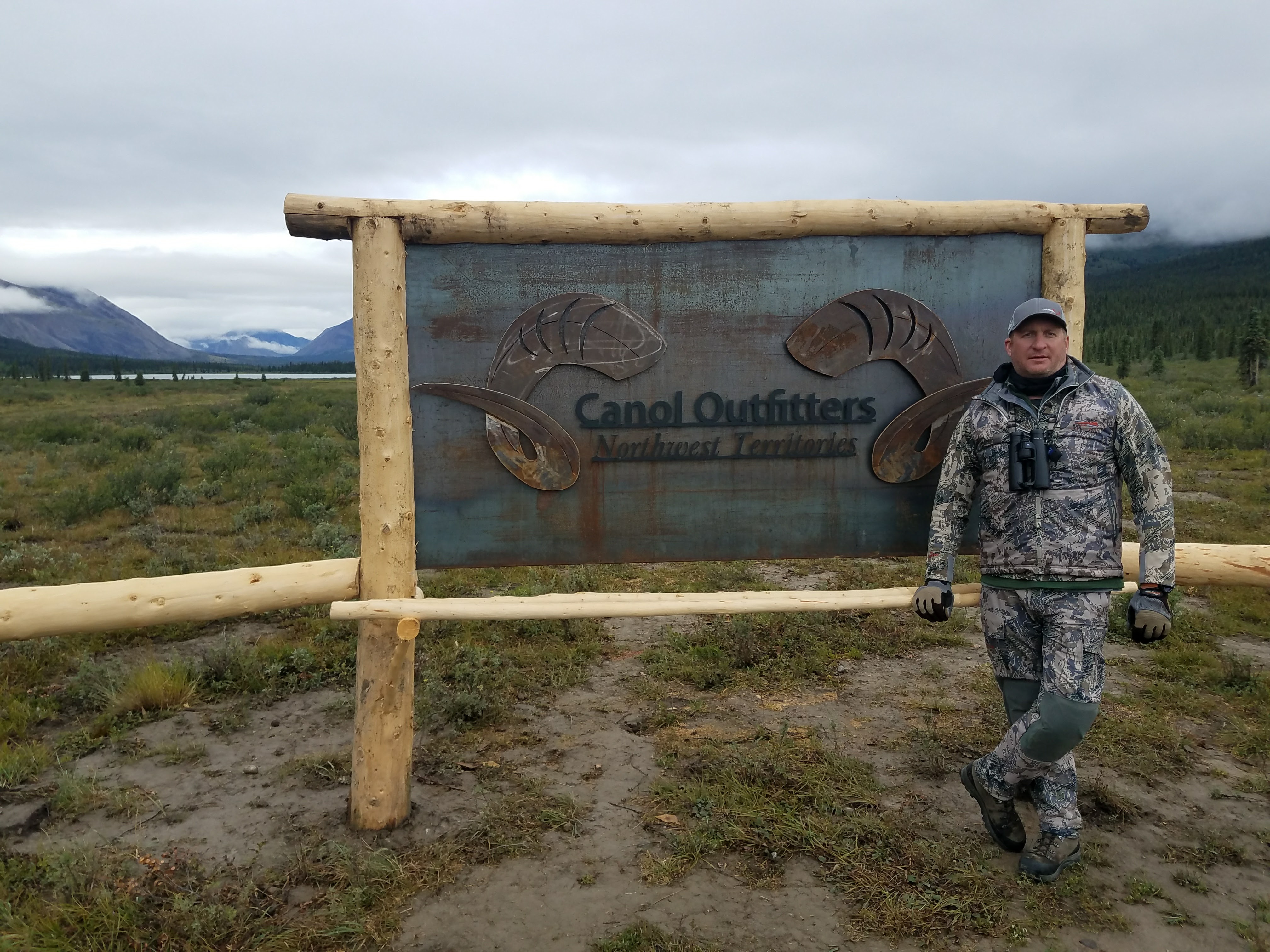 That brings up the next detail I like to have, a good, thorough gear list. Any outfitter or guide worth their salt should be able to provide you with a very detailed gear list for your hunt. I usually make my own slight tweaks, additions and subtractions to suit, but this gives me a good starting point, particularly when it comes to food. I highly dislike freeze dried meals and will go to some pretty extreme ends to not have to eat one. I think I burned myself out on “dehydros” in my younger years. As of this writing I have not had to devour one of these nasty creations for nearly ten years now.

Another point I like to get a handle on is whether or not we will have a packer at our disposal. This is generally only a possibility on a horseback or float type hunt. Sometimes a bush plane hunt will accommodate a packer for you if you find yourself moose and caribou hunting on the side. A sheep isn’t really a heavy load for two guys, but when you put a sheep and your camp on your back it will probably be as much as you would ever want to try for very long, trust me.

The final question I want to ask is what happens in the case of failure? I know it almost seems like back luck to even talk about it at all, but you need to know how your outfitter handles such things. Some outfitters will add additional days at a slight cost or even free if you don’t kill a ram, if you can handle more backcountry at that point. Either way, I just like to know where I stand ahead of time on that front. It makes it easier to deal with ahead of time rather than over a sat phone or Spot device.

Big rams are getting ever harder to come by, and more expensive to chase down. Making sure you have all the right questions answered before you book that hunt of a lifetime can make hunting sheep a heck of a lot easier for you and your bank account. Remember, as with most things in life, without a heavy dose of luck, you usually get what you pay for, and sheep hunting is no different.