Many RVers have adopted a plant-based diet these days.  Taking a healthy vegan lifestyle RV camping is easier than ever before.  There are always the obvious vegan camping food choices including easy plant-based meat options (like Beyond Meat products).  But for plant-based foodies, vegan camp cooking can be creative and fun.  We’ve got 10 vegan camping recipes that everyone will love

Start your day with protein-packed avocado toast that’s nutritious and delicious.  These breakfast sandwiches incorporate Just Egg Folded, an amazing bean-based product egg replacer (easy to pack in the RV fridge), avocado and Yves veggie bacon on a bed of spinach and are topped with slices of tomatoes.

For each vegan toast, you’ll need:

If you can toast your bread over the campfire, you’ll be able to incorporate a lovely, lightly smoked flavour into this breakfast sandwich.  We recommend using a campfire grill basket with an adjustable handle for this.  If you don’t have one of these handy devices in your campfire cooking arsenal, you should get one.

Melt the coconut oil in a frypan. Use this to cook the Yves veggie bacon until it is almost crispy. Cooking veggie bacon in oil adds to its flavour and texture.  Heat the Just Egg Folded in the frypan along with the bacon.

While the veggie bacon and Just Egg are cooking, assemble your toast as follows:

This pie iron pizza pocket recipe is so easy to make.  It’s possibly one of the easiest vegan camping recipes we know of It’s a big hit with kids and adults alike.  You’ll need a pie iron for this recipe.  If you don’t have a pie iron, get one.  Pie irons are so useful for easy, mess free campfire cooking.   It starts with 2 slices of white bread that’s heavily “buttered” on one side. The bread serves as the pizza crust.  You can try using whole grain bread for this, but we’ve found white bread produces the best crust.

Cook the pizza pocket about 8-12 inches to over hot coals.  You’ll need to cook for about 5-7 minutes per side depending on how close to the fire you were cooking.  You can carefully open it after 5 minutes on one side to ensure the color is golden brown before flipping the pie iron to do the other side.  When both sides are golden brown, it’s ready!

(Recipe used with permission from Rpodyssey). This is a simple but delicious vegan recipe that is absolutely perfect when cooked in grill basket over a campfire.  Don’t let the name fool you:  While the recipe is called “Grilled Portobello Mushrooms”, it actually includes a colorful assortment of vegetables too.

4 portobello mushrooms 1 zucchini,  thickly sliced 1 thick sliced onion I like red, but use what you have 12 Grape tomatoes 1 Green pepper 2 Beyond meat sausages cut in 1 inch pieces (optional)

How to make grilled portobello mushrooms:

Wash and dry all of your veggies

slice the onion into 1/4 thick slices

Whisk all of the marinade ingredients together until they are one beautiful, aromatic marinade.

Allow the mushrooms and veggies to marinate for 10- 20 minutes or even more, if you can.

Put the veggies and mushrooms into a flat grill basket.  If you are using pieces of Beyond Sausage, add them to the grill basket too. Slowly grill about 8-12 inches over hot coals until the veggies are somewhat soft and the onions are beautiful and translucent. Enjoy 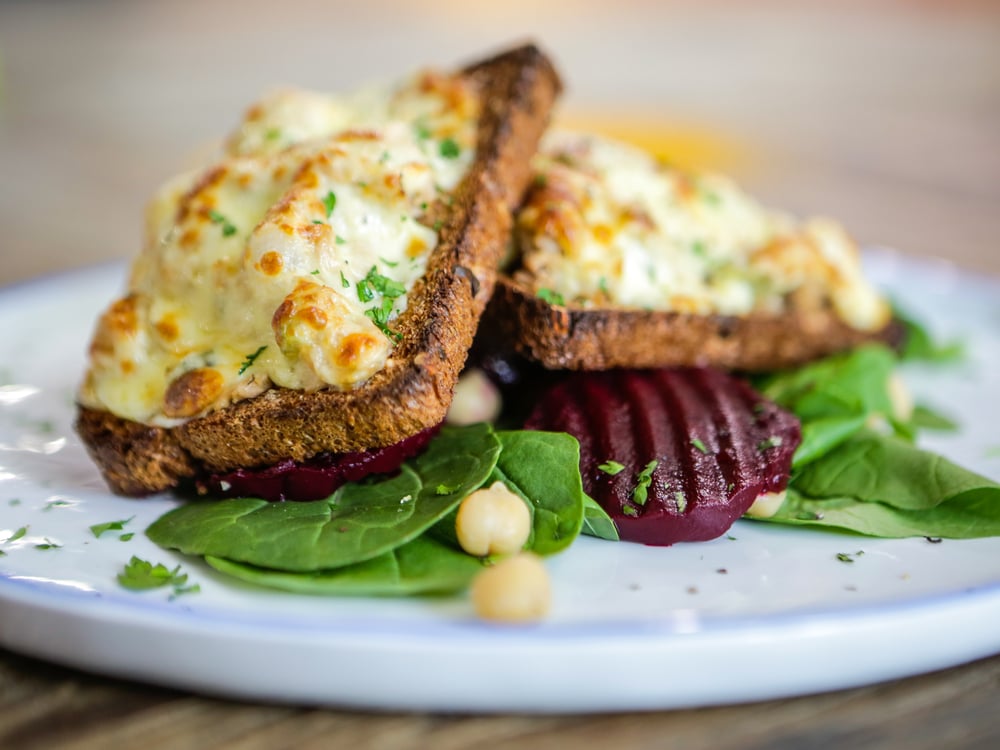 Vegan camping recipes don’t get much better than this.  These not tuna melts get their “meat” from chickpeas.  Chickpeas are a superfood that is packed with protein and antioxidants.  Vegan not tuna melts can be baked in a toaster oven or the filling can be adapted for pie iron tuna melts and cooked over the campfire.

How to make vegan not tuna melts:

Set toaster oven temperature for 350 degrees. Drain the chickpeas and place in a bowl.  Mash them with a fork until they are about 3/4 mashed.  You still want them to have texture.   Mix in the mayo until the chickpeas are all covered.  Add the whole grain mustard, dill, chopped greek onions, and salt and pepper Top with grated vegan cheese  Bake in toaster oven until cheese is beautifully melted, and bubbly. Enjoy! 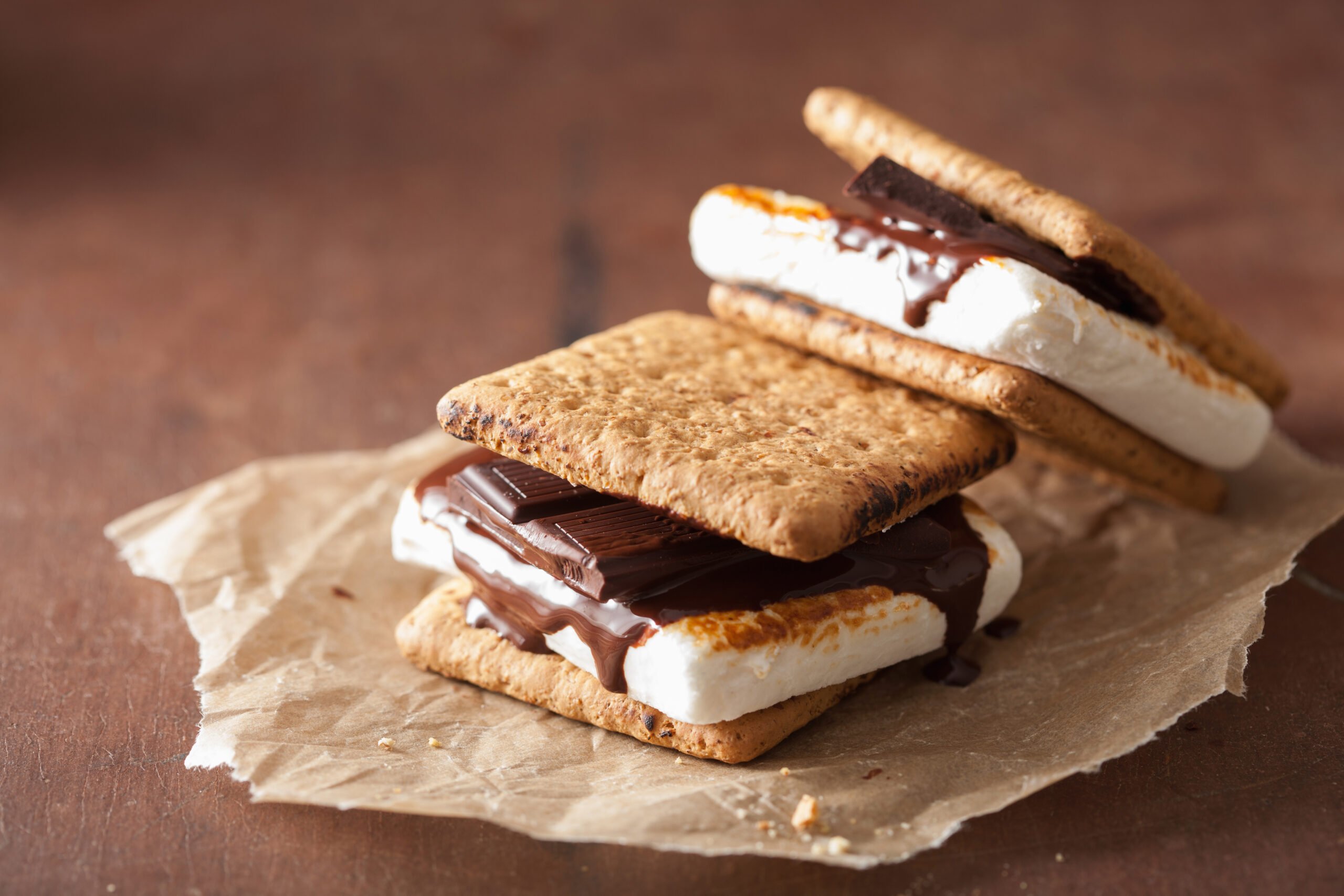 We veganized this campfire favorite with vegan graham crackers,  gelatin-free marshmallows, and gorgeous dark chocolate.  Of course, you could also use dairy-free milk chocolate, which is deliciously made with coconut milk.

How to make vegan s’more’s

Does Disney World Have RV Camping?

How to Find Your RV Travel Pace

Discover The Best RV Campsites In The Northwest