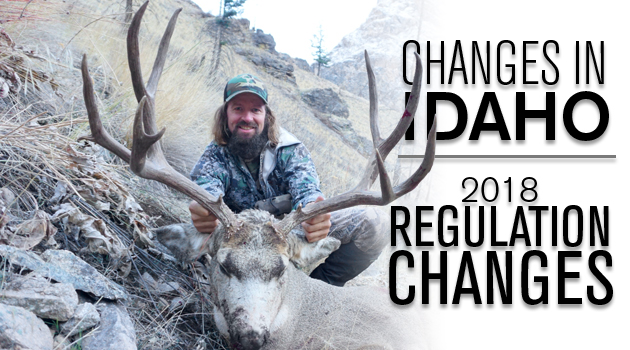 Generally speaking, Idaho makes very few changes during the biennial season/regulation period. However, there are a few exceptions to this and for 2018 we are seeing a couple changes that are bigger than “usual” and we want to make note of it now before applications are due.

The headliner for now is the change up of the unit 46 California Bighorn sheep hunt. There has been disease found in the area and the sheep populations and herd health are a concern. Thus, IDFG has closed hunt 7007 and essentially condensed the two sub-season hunts into one longer hunt and cut the tag allotment from a total of 5 down to 3. This hunt choice has been a difficult but solid producer over the years and offers a unique hunt choice in the Bruneau-Jarbidge Wilderness area. Details of the disease are currently unknown to us, but this is often bad news for the herd over the long run as wild sheep tend to be quite sensitive to sickness. Keep an eye on the IDFG website for updates. Hopefully, a lightened fall harvest and some innovative biologists can turn this around quickly. What does this mean for you? This hunt was already difficult with low harvest odds. With the cloud of disease looming, this hunt choice is a tough one to consider. Then again, applicant pressure will likely shift and for a hardcore hunter, odds could be better than ever. You will have to weigh the odds yourself as point creep and sheep hunting are converging into a tough outlook throughout the West. Spending points conservatively is often the safest.

A last-minute front runner showed up and that was the biologist recommended unit closure for Rocky Mountain goat hunt 6005 which takes place in unit 10-3. We rank this hunt as a solid green chip opportunity and this news is a crusher for goat hunters. Excellent billy harvest, great trophy potential for Idaho and due to not being able to find the goats IDFG has decided to cut the quota and close this hunt for 2018! Not the news we want to hear, for more reasons than one. I sure hope we can get another survey in there and find them. Long story short, none of us want to burn a bunch of points on a hunt and not harvest because the animals up and moved out. Or go out and harvest the last of a herd’s population. Scratch this hunt off your list and study up! We lost a good hunt opportunity here.

Next up are unit 10A deer tags; hunters have reported fewer mature bucks in this region and have urged IDFG to reduce the pressure and harvest. The current solution for 2018 is to prohibit the use of a 2nd deer tag for harvest in Unit 10A. Secondly, they reduced the season length by 11 days. Thus the 2018 season ends November 20th instead of Dec 1st. The combination of these two measures should lighten the harvest and give these deer a chance to gain some momentum. The takeaway here; kudos to the sportsmen that brought up these concerns and IDFG for listening. If 10A is on your list, I wouldn’t shy from it, the percentage of 5-point buck harvest is still at objective and the hunt dates still provide a solid rut hunting opportunity. But then again, maybe giving these deer a short break isn’t a bad option either!

Weiser River Elk Zone A tags, this has been a popular topic after these tags sold out in 45 minutes last year. In 2017 IDFG added a general season any-weapon cow elk hunt to the A tag, but subsequently capped the A tag at 1900 tags for fear of over hunting the unit. These measures resulted in a buying frenzy and after the dust settled statistics showed that approximately 600 archery elk hunters were displaced during this event and were not able to hunt their zone. For 2018 the commission removed the cap for this area to provide better hunter opportunity. I don’t know all of the details here, but it would seem to me a better choice would be to open an archery only permit instead of pulling a cap and opening the doors on a unit that has so much attention for high elk populations and fast tag sales. Takeaway? I would say many hunters will be happy to have their archery elk spot back, but I sure hope this extra hype doesn’t create too much hunter pressure.