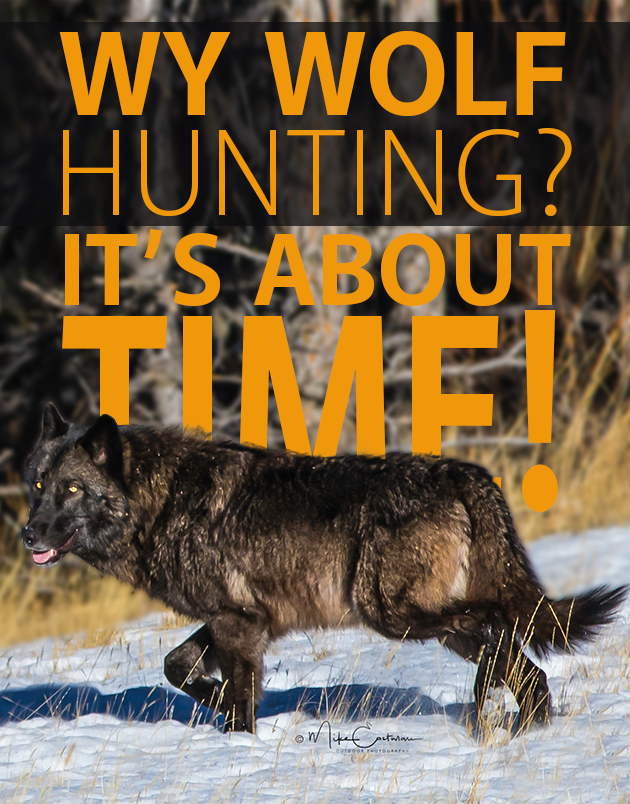 “(AP) — A U.S. appeals court on Friday lifted protections that kept gray wolves an endangered species in Wyoming for years after federal officials removed packs in neighboring states from that list.”

After nearly four years of unchecked population control, Wyoming’s ever expanding, non-native gray wolf population may soon finally see the hand of sound wildlife management headed its way. At this point we are not 100% sure if this will actually mean a Wyoming wolf hunting season this fall for the super predator but things are certainly looking that way.

When asked late Tuesday about a possible wolf hunting season in Wyoming a prominent Game and Fish official responded with, “We believe it’s possible, the earliest would be this coming fall.” This was said by said Brian Nesvik, the Wyoming Game and Fish wildlife division chief.

Nesvik continued by saying, “Wyoming showed it could manage wolves in a conservative and responsible manner that met all objectives after delisting. We look forward to again taking on the important work of managing this public resource.” In my opinion the state almost seems to be surprised by the overwhelming 3-0 decision by the Federal Appellate Court in their favor. Either way, the state seems to be playing this out in a very conservative manner thus far.

I am certainly no legal expert by any means but this situation seems to be heading more and more into a corner for the animal rights groups that keep forcing our time-tested and sound wildlife management plans into the federal court systems. Most legal folks I have talked to pretty much agree that the US Supreme Court would likely have no interest in hearing this case whatsoever. That means, at some point this particular case could finally become un-appealable, but the fight will probably not be completely over for a very long time.

“We’re still evaluating it, but we’re going to continue to fight to protect wolves against hostile management policies, we’ll have to figure out what the next steps are but we’re not retreating from the position that wildlife are not vermin.” Tim Preso, Earth Justice Attorney.

We as hunters still need to continue pushing from our end to motivate the US Congress and our president to loosen the choke hold the ESA (Endangered Species Act) legislation has on the states to manage their wildlife as they see fit. As it stands right now, the ESA is being used as a weapon by the “green groups” to control the very top rungs of the ecological food chain in a concerted effort to minimize or even destroy the sport of hunting altogether.

These groups know, that if they can somehow manage to take control of the wolves, bears, cougars and coyotes at a federal level, then bog the states down in a system of federal court judge shopping and maintain massive control of public land access or lack thereof for hunters and fisherman, they will have a backdoor to outright control and even elimination for the necessity of hunting as a management tool. A very frightening fact for us all if you ask me.

In the meantime, while our wildlife management slowly works through the federal court system, our elk herds will continue to decline, our moose herds are on track to all out regional extinction all while these groups have begun to eye up the sage grouse as another facet of control over our access to massive tracts of public lands for hunting and public recreation purposes as the non-native and invasive wild horse epidemic erodes critical ungulate habitats throughout the wildlife and hunting rich states of Wyoming, Utah and Nevada. It’s all part of the plan folks.

We must keep up the good fight and be ever diligent to not allow the general public to buy into the fake narrative that the green groups are pushing. A message that they actually care about wildlife, because they don’t. They care about control and disruption of the North American wildlife management model period.

Here is what we are up against, and believe it or not, this comment to a local newspaper article came from a resident here in Wyoming!

U can’t lift it wolves are majestic and wonderful creatures, who deserve to live in peace and Harmony, they have there only families and children that they protect, they only kill to survive unless they are attacked or threatened it is not the wolves that are killing creatures they are tons of animals that could be killing the local farm stock. So I say that they deserve to be left in peace. Not only are they an important part of the eco system. But they are important to the environment, they help with the rivers, keeping rodents population down and so much more.

Best of luck on the draws.

P.S. Make sure you check out the latest episodes of Eastmans’ Elevated! Steven Drake talks shed hunting and his worldwide hunting adventures!