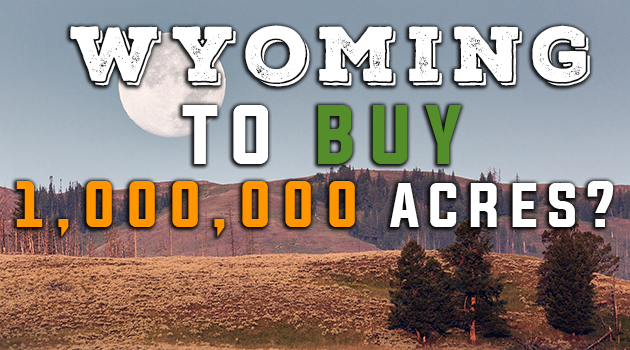 Missouri is known as the “Show Me” state, and Wyoming may well be known as the “Go Big or Go Home” state if the latest revenue diversification plan on the table is adopted. The state of Wyoming is in the process of possibly purchasing the largest single land mass by a government in over 150 years-since the purchase of the state of Alaska in 1867.

The Governor and legislators of Wyoming have the very difficult decision and unique opportunity to purchase over one million acres of private land holdings from Occidental Petroleum in southern Wyoming. This forty-mile-wide swath of checker-boarded public/private land runs East to West along the railroad right-of-way just North and South of Interstate 80 nearly across the entire state.

The purchase would encompass over one million acres of private land holdings which entangle another one million or more acres of BLM and state lands. This acquisition would open up more than two million total acres to hunting and general public recreation, a land mass equivalent to the size of Yellowstone National Park and more than the entire state of Delaware.

The purchase would be used as a revenue generating function for the state as the it also includes the mineral rights on more than 4 million acres total. Much of which is already in production and generating large sums of cash in the form of various types of mineral royalties. The land is also thought to be under-utilized for grazing and further mineral explorations including coal and rare earth minerals. The rare earth mineral side of the equation could be a huge market in the upcoming years as these unique elements are in higher demand for the production of cell phones and missile guidance systems.

Wyoming’s government is underwater with severe budget deficits as the mineral royalties on gas and coal have been depleted due to regulatory strangulation and increased competition for gas exploration from other states have driven prices down and costs up.

Luckily, the state of Wyoming has a massive rainy-day fund worth billions sitting in investments on Wall Street. This purchase would be made from this fund as an investment back into Wyoming itself with a massive upside-big revenue. Wyoming has the unique once-in-a-lifetime opportunity to invest in itself and in the process increase revenues to help with budget deficits all the while providing a massive conversion of private land back to public land in the process.

The biggest challenge here will be oversight and the day to day management of such a beast. As a very politically homogeneous state, Wyoming does have a tendency to be a “good old boys” system, and with that sometimes comes some very alarming business dealings.

I am very hopeful this purchase will find its way through our legislative red tape and our Governor can make this happen. This would be huge for our state in more ways than one. As long as a very solid structure is put into place with concrete checks and balances so that potential waste, fraud and abuse are nearly eliminated in the process.

Without a doubt, this would be a very large benefit for those of us that recreate on public lands in Wyoming. This purchase will open up a massive tract of land for hunters in Wyoming, not to mention putting potentially piles of landowner tags back into the draw pool in some of our very best deer and antelope big game units.

There’s plenty of folks talking about public land and access concerns in the West these days. I hope Wyoming can lead by example and show other states how to really open up more land for public hunting. To put it mildly, this would be HUGE for hunters!!!

President Trump Tweets in Favor of Fully and Perma...
$1,000 for shooting a wolf?