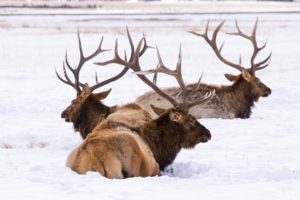 Elk populations in Wyoming are booming… well in some places, like the areas with no large carnivores and mostly private property, namely in the eastern half of the state, the elk picture is not nearly so bright in the shadow of the nation’s first national park. It’s the same story in Montana and with growing elk numbers comes management difficulties. Namely, how to keep landowners/stock producers from being eaten out of house and home or shuttering operations due to too much competition from wapiti.

A proposal from the Wyoming Stockgrowers Association seeks to rebrand both the regulations and name of the state’s “depredation hunts” to allow for more flexibility. The new term would be “auxiliary management” and would supposedly open possibilities for expanded hunting of big game, wild turkeys and trophy species like grizzlies and wolves.

What does this mean for Wyoming hunters? Well, it is possible that it means increased hunting opportunities, especially for elk in areas like the Black Hills and Laramie Mountains. The problem lies in that where the elk live is mostly private land that is leased by outfitters for hunting. If these changes are in fact put in place there will be a lot of ironing to do. For example, landowners managing hunting pressure, outfitters navigating demand for access and hunters jumping through hoops to tag an elk or two for the freezer.

If done right this could be a winning scenario or hunters, stock producers, outfitters and the state of Wyoming. This burgeoning herd needs to be managed and responsible, limited hunting is the best tool for the job. Landowners would be relieved of having too many elk to compete with, outfitters could offer expanded services and hunters would gain more access to huntable elk.

On the surface this all looks great! But I personally wonder why a more simple solution hasn’t been used… If you’ve got too many elk, let people hunt them!

Admittedly, I’m not a livestock producer and my viewpoint may be overly simple.

I’d love to hear what you have to say.

Where Should You Start When Shopping for an RV?
EASTON MARKS 100 YEARS OF AMERICAN-MADE ARROWS