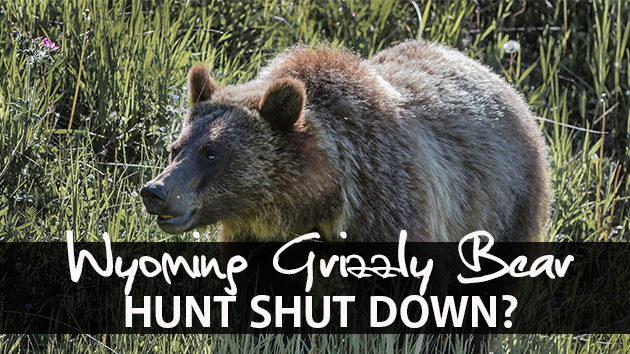 Just when the historic Wyoming grizzly hunt was set to finally happen, on August 31, the day before the hunt, Judge Dana Christensen, a U.S. appeals district court judge in Montana, issued a restraining order halting Wyoming’s grizzly hunt for at least two weeks, at which time he may issue a more permanent injunction or give a ruling.

Who is This Judge?

Why would a judge in Montana, which is in the 9th federal circuit, rule on a Wyoming hunt when Wyoming is in the 10th circuit? Presumably because that’s where environmental extremist groups go to find a friendly federal judge.

Judge Christensen has been a dependable judge when environmental groups sue the US Fish & Wildlife Service (USFWS). In August 2016 he ruled that the USFWS decision to not list wolverines as threated or endangered under the Endangered Species Act (ESA) was “arbitrary and capricious.”

The judge was upset that the agency did not take into account predicted effects of climate change brought up by the opposition. After the agency said that it was difficult to rely on predictions he rebuked them sharply, writing that “No greater level of certainty is needed to see the writing on the wall for this snow-dependent species standing squarely in the path of global climate change….”

In 2017, he ruled against the USFWS again over not listing grizzlies as endangered in the Cabinet Mountains and Yaak River drainage.

On August 15, 2018, Judge Christensen ruled against a Montana tree thinning project by saying that the US Forest Service had failed to consult first with the USFWS about the impact on Canada lynx, an endangered species. Never mind that lynx have not been shown to exist there, although the area is close to an area where lynx have been mapped.

This all stems from the combining of six different cases into one last March. At that time, Judge Christensen said in denying requests for delaying the trial, “I don’t think we always make our best decisions, our best briefs or our best arguments in the context of emergency injunctive relief motions… It’s not efficient to deal with issues of this importance in the context of restraining orders.” Right. By the scheduling of the trial for the end of August it pretty much ensured a last-minute action.

Again, the greens argued that climate change was going to endanger the species in question, this time because recent warming has been unkind to white bark pines, a staple food of grizzlies. Of course, grizzlies are omnivores and don’t rely on just one food source. Again, it relies on predictions. The fact that grizzlies have recovered far beyond the initial goal for delisting and continue to thrive, as any Greater Yellowstone Area elk hunter can testify, was to the greens, not the real issue. The real issue is climate change. Somewhere, Al Gore is smiling.

Really, the main issue is their abhorrence of hunting. Whatever they can do to stop that, they will. And the way they stop things is overwhelmingly through the courts, and they only need find a judge friendly to their cause, who will issue restraining orders and injunctions.

After grizzly numbers had recovered far past the goal, after all WYG&F did to find ways to compromise like only allowing one hunter at a time and ending the entire season if one sow was shot, this latest chapter is another reminder that as long as the courts are open, nothing is a done deal.

Government by The People?

America was founded as a republic in which the people elect representatives and a president who then appointed impartial judges to interpret the law. Checks and balances were put in place to prevent abuse of power, the Framers of our Constitution being afraid of concentrated power like the monarchy from which they declared independence.

Today, we have the ultimate concentration of power, where one judge decides matters for a whole state or even the whole country. Which judge? Whatever judge a radical group wants to use. The result is a bizarre monarchy in which extremists decide who is king for the day. Jefferson and his colleagues would be besides themselves.

When a radical group in California can use a friendly judge in Montana to stop a hunt in Wyoming, things are out of control. Collectively, we’ve got to work out a better way.