Engaging in hunting requires numerous decisions to be made on a variety of things, and the most important one is the weapon. The choice of weapon is guided by several factors, such as ease of use, ammo accessibility, and, of course, animals it can kill humanely.

A .22 rifle is justly considered the best beginner rifle, but, as with nearly everything in our world, it has its strength and limitations because all-arounders are pie in the sky. In particular, novices want to know whether a .22 can kill a deer. So we’ve decided to write an article about .22 rifles and share what animals they can handle ethically.

What Can You Hunt with a .22 Rifle: All You Need to Know

Why a .22 Rifle is Perfect for Hunting

Though a .22 is the best rifle for anyone new to hunting, we shouldn’t treat it as a newbie’s gun. Some experts continue to use these guns because they meet their needs perfectly.

But what exactly makes a .22 rifle the best gun for certain hunting scenarios and applications? Here are a couple of reasons why it has earned its spot as the go-to gun for hunting.

A simple .22 caliber rifle is very easy to handle because it’s lightweight. An average one, whether it’s a bolt-action, semi-auto, or lever-action type of a .22 rifle, weighs around 6 pounds. For the sake of comparison, .223 Remington non-AR rifles weigh 7+ pounds, while bolt-action rifles in .308 Winchester are about 8 pounds. A lighter rifle means more stable aiming and more accurate shots because your hands don’t tire so much from holding a weapon. The lightweight and simple construction of the rifle and small .22 rounds of ammo are reasons why survival rifles are in .22 LR.

We all hate a strong recoil that hurts the shoulders. No wonder new shooters develop what gunners call flinching, recoil anticipation that manifests in nervous movement as an instinctive reaction to pain and noise. With a .22 caliber rifle, you have the lowest chance of developing a flinch because these guns give the mildest recoil due to the lower power of all .22 caliber rounds and the weight of a rifle that absorbs a portion of that felt recoil.

What Animals Can You Hunt with a .22 Rifle?

Generally, the .22 is the best caliber for small game hunting. However, each cartridge design dictates application limitations. Let’s take the .22 LR and the .22 WMR as these are the most popular for hunting. The usage of the .22 LR is limited to hunting squirrels, rabbits, doves, pheasants, and other similar-sized animals, while the application of the .22 WMR extends to include larger animals such as coyotes. Remember, however, that your range should be 100 yards at max to kill a coyote-sized animal with a .22 WMR rifle humanely.

As a higher-velocity cartridge, the .22 WMR is not recommended for hunting squirrels and other small animals as it can spoil meat and hide.

Now, can you hunt a deer with a .22 caliber rifle? The short answer is no. The .22 LR and even the .22 WMR cartridges have small light bullets that fly at a comparatively low speed and, thus, can’t penetrate deep and create a large wound channel. Moreover, the .22 LR, for instance, is banned for deer hunting in almost all US states. 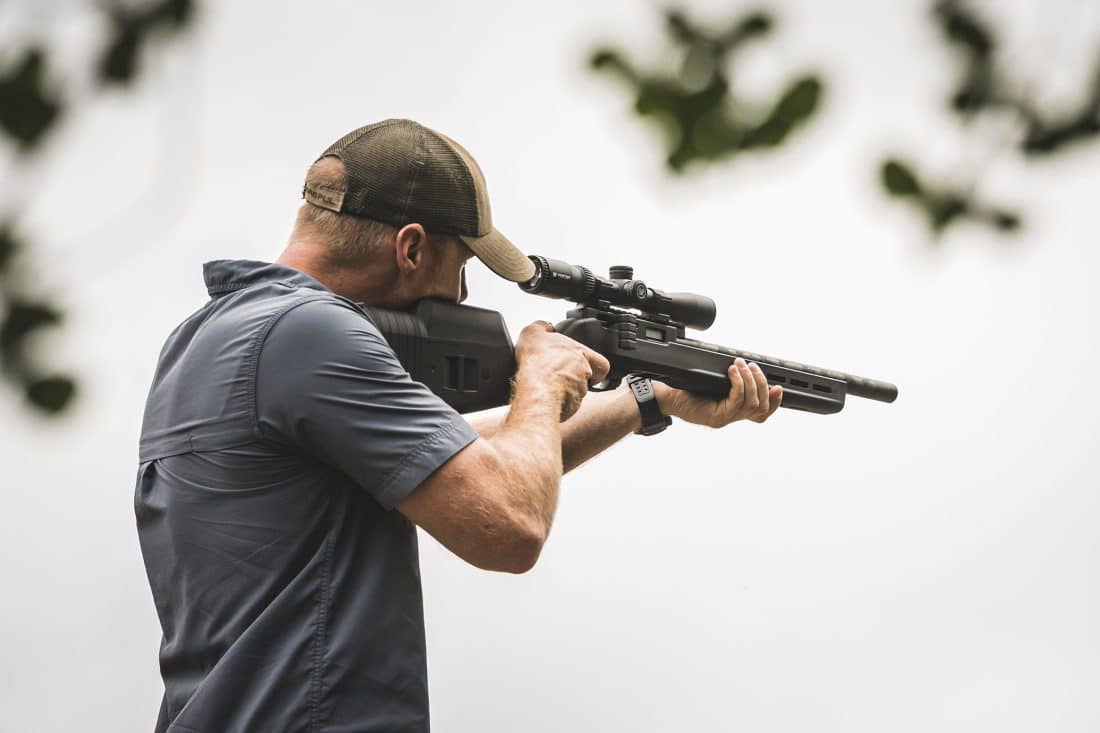 The Best .22 Rifle for Beginners

If you want to purchase a good .22 rifle for hunting, we recommend going with the Ruger 10/22. This iconic .22 semi-auto rifle is fairly simple and easy to use because its light body can provide you with a short learning curve.

The Ruger 10/22 is also very affordable, making it a great first gun. The price is around $250-350, depending on a particular model. The low cost of this rifle plus the cheap and widely available .22 ammo translates to more training time at the range. Another great thing in favor of this platform is that it can be equipped with coffin and drum magazines capable of accommodating 25-110 rounds of ammo. These will make your time at the range even more pleasant. However, if you’re a beginner, we suggest you get yourself a nice 25-round magazine so you wouldn’t have to carry much weight.

Also, the Ruger 10/22 is a comfortable platform to work on. It’s easy to add accessories, replace parts, and customize the gun on your own.

In short, there’s no better way to enter hunting than with a .22 caliber rifle. It is lightweight, simple to use, has affordable and lightweight rounds, can easily be put together and taken apart, and can shoot an array of game animals up to coyotes. However, you need to pay much attention to particular cartridges and loads of ammo.

The post What Can You Hunt with a .22 Caliber Rifle 2022 appeared first on HuntingLife.com.

Mechanical Broadheads NOW LEGAL In ALL 50 STATES
Does Disney World Have RV Camping?