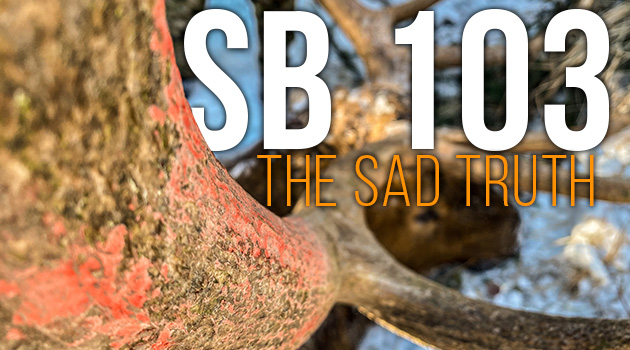 Rest easy- Your hunting licenses will not be increasing by 85%, for now.

Keeping with tradition, the odd years in Wyoming bring odd and sometimes tired old retreads of legislative bills gone by the wayside from the past legislative session. Senate bill SF0103 is one such case. This bill has been refined from the last time it was introduced but still lacked any real serious support at the state legislative level. The bill failed miserably to emerge from the senate TRW (Travel, Recreation and Wildlife) committee by a vote of 1-4, meaning this proposal was far from favorable once the Committee looked further into the repercussions of such a bill on the Game and Fish Commissions fiscal responsibilities to the state’s sportsman and the department as a whole.

On a bit of a side note, Wyoming is a very traditional and conservative state by nature. Bills like these have a very, very tough road to reality in Wyoming. When it comes to wildlife related legislation, the state has a very guarded approach to wildlife related bills that do not have the full support of the Governor’s Game and Fish Commission. Wyoming sees wildlife management through ballot measures and stiff-arm legislation as a true threat to their system. I do not see our Governor ever signing a piece of wildlife related legislation without the full consent and recommendation of the Game and Fish Commission, period. The Governor appoints the commission at his discretion for a reason. There are lessons to be learned from the Colorado wolf reintroduction debacle.

The details of this bill are somewhat straightforward which is surprising for politics these days, but this is Wyoming after-all. In a nutshell, this bill aimed to cut the nonresident tag allocation for big game licenses to less than 10% from the historic norms of around 20%, depending on the species (moose-16%, sheep-25%, deer, elk and antelope-20%). The original bill introduced a few years ago was very simple and straightforward to that change. But the bill quickly ran into a brick wall regarding funding concerns given the fact that nonresident hunters contribute a massive haul of more than 77% of the total licensing revenue generated by the state of Wyoming. In addition, nonresident applicants in Wyoming contribute more than $12,000,000 worth of preference point fees each and every year to the Wyoming Game and Fish Department’s budget, while resident applicants only pony up an anemic $100,000. Plain and simple, slashing nonresident hunting licenses by half did not sit well with Wyoming legislators, Game and Fish Commissioners, Outfitters or our Governor. The original bill died quickly.

With the bloom of another legislative year brings another opportunity at a run for this bill as a more refined version including a funding realignment component that would, according to the bill, actually increase revenues to the state Game and Fish Department. This new retreaded bill, Senate Bill SF0103 again sought to cut the nonresident tag allocations by more than half, but also sought to nearly double the cost of what tags were left to nonresident hunters and applicants. In addition, the bill seeks to increase application fees slightly for both resident and nonresident hunters ($5 to $7 for resident, and $15 to $17 for nonresident) alike. The bill would also eliminate nonresident applicants from any hunt that garners less than 10 tags in the quota altogether and would create a $500,000 wildlife crop damage fund with the increased license fees, obviously a landowner crumb thrown in to increase potential legislator support.

The net result would be an $8 million increase in net revenue funding to the Game and Fish Department for the 2023 fiscal year. I assume that figure is correct given it was computed and verified by the folks cooking up the bill, but I did not take the time to back calculate the number as fact.

Some of the obvious problems with this bill include the fact that this bill would literally gut and neuter the nonresident preference point system as it stands. There would no longer be enough nonresident tags allocated into the system to operate the current dual application system placing all nonresidents into one single draw pool, essentially eliminating the “Regular” draw pool and placing everyone into the “Special” draw pool with massively increased fees. I also think this would probably collapse the Wyoming preference point system with demand. The state of Wyoming is seeing massive influxes of applicants into the system currently. For instance, five years ago Wyoming had a total of 67,000 total applicants with elk preference points inside the system, this year there will be nearly 125,000 nonresident applicants vying for an elk tag in the Cowboy State. This represents a massive increase of 87% or nearly 58,000 applicants! The system is not sustainable as it currently sits, without cutting the available tags in half.

The negative economic impacts to the state tourism industry would also be less than ideal as nonresident hunters contribute tens of millions of dollars to our economy each and every year in areas that otherwise see very little tourism dollars during the very busy summer months. The guiding and outfitting industries in Wyoming are a vital sector of our seasonal economy, like it or not. The hunting season also extends the tourism season by nearly two months in Wyoming towns like Jackson, Cody and Sheridan.

And of course, there is always the risk of making hunting more and more of a “rich man’s” endeavor with massive price escalations such as those proposed in this bill. The cost of a nonresident elk tag would increase by 59%, 76% for deer and a whopping 85% for antelope.

As for the resident perspective on all of this. I certainly do not speak for myself here. Most residents I talk to, do seem a bit intrigued by a potential increase in their share of Wyoming’s hunting bounty, but all in all really don’t think it is a fight worth having at this point. If it isn’t broke don’t fix it kind of deal. As a resident myself, I can understand that line of thinking. Would it be nice to get a few more tags for ourselves? Yeah probably, but is it worth the damage to our department and our economy? Probably not. The last thing we want as residents is our Game and Fish Department depending more on resident dollars to make their budgets work. Is the $62 resident elk tag nice to have? Yes, however that price comes as a sacrifice by the nonresident hunter. The more we depend on nonresident dollars for wildlife funding the more the state must consider nonresident concerns with regard to our wildlife management decisions. A potential down the road risk if you ask me.

And let’s face it, putting 741 bull elk tags back into the resident system of over 10,000 total elk tags really won’t change your draw odds by very much in the end. There’s no magic, hard tags are going to be hard to draw no matter what you do.

Be careful what you wish for. I have talked to numerous out of state hunters that are fed up with the tough draws and increasing prices in Wyoming, Montana and Idaho and rebelling from the system not by dropping their applications, but by moving there to gain residency. This will undoubtedly increase the demand on the resident application systems throughout the West in the future, which could actually play into the need for bills like this in future.

If you look at this bill fairly however, one could make a very strong argument for a future tag allocation realignment for nonresident applicants. Particularly when you compare Wyoming’s very, very generous nonresident allocation to that of other neighboring states. A 25% nonresident tag allocation for bighorn sheep seems extreme when compared to most other states in the West where a 5% allocation is more the norm.

No matter what you think of Senate Bill SF0103, the signs all point to increased nonresident tag prices and reduced nonresident tag allocations throughout the West for the future. There just isn’t enough wildlife resources in the West for the increasing, massive demand we are seeing headed our way. The CoVid-19 pandemic is creating a massive population redistribution throughout the country and conservative Western states are seeing more than their fair share of new residents making this situation accelerate even faster.

COLORADO DEADLINE COMIN’ IN HOT!
POACHING PUNISHMENTS: Does The Species Make A Diff...