Tag Demand Skyrockets in the West 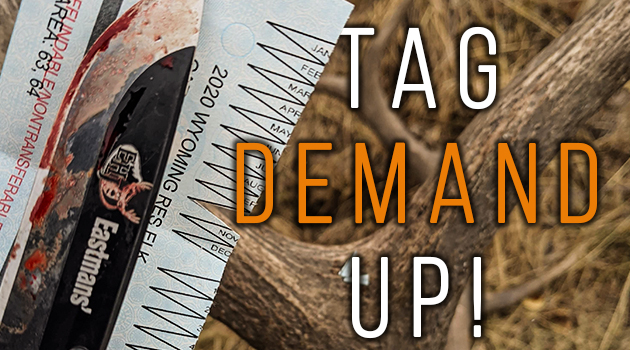 If you have been patiently waiting for that tag of a lifetime, don’t get your hopes up.

There is little question that we are living in a different world than we got accustomed to only 18 months ago. One area that has continued to change drastically in the past year is the demand for big game hunting tags and licenses throughout the western half of our continent. Very little foreign hunting opportunity as well as a continued up-swing in hunting participation seem to have created a demand for big game tags that we have not seen in our lifetimes.

The massive demand blew out the state of Colorado’s server system the week before the application deadline causing the state agency to postpone the application deadline for the better part of a week. To say this is almost unprecedented would be an understatement. A very reliable source has indicated that the Colorado draw system saw an incredible increase of more than 35,000 additional applicants this year versus last year, which again was a record setting year.

In the Big Sky Country of Montana, our sources in Helena are saying they have seen application demand for both limited and general hunts well beyond what was experienced last year, which was up over 10,000 additional applicants and has stood as a record up to this point in time. Last year, for the first time in recorded history, Montana FWP had zero nonresident elk and deer tags available after the draw. This year the Montana draw system has seen another substantial rise in big game applicants which equates to a 38% increase over the record setting 2020 application demand.

At this point it is very hard to put actual numbers to the demand quotient until the actual draw is conducted and the results posted to the public. But we can go back and build somewhat of a trend based on the demand for Wyoming’s coveted nonresident elk tags. Wyoming is one of the highest demanded elk states in the country. With Wyoming’s nearly perfect trade-off between quality and opportunity, Wyoming is a very good gauge on what is going on in the hunt draw system for the entire western region of the US.

Looking at how many applicants have flooded the Wyoming elk draw system over the past decade or so, gives us a very good idea on true hunt demand for elk and deer throughout the West, and I will let the cat out of the bag right now, it has gone only one direction and that is straight up!

For the 2015 Wyoming elk draw there were precisely 59,378 nonresident applicants with one or more preference points going into the draw that year. This year, a short six years later, headed into the Wyoming elk drawing there was a massive crowd of 124,033 elk applicants vying for one of Wyoming’s coveted elk tags. This represents a net increase in applicants into the Wyoming draw system of more than 108% over a five-year period. The largest increases in applicants came in 2019 and 2020 where 18% and 20% increases were seen in a single year.

In a nutshell, the demand for Wyoming’s elk tags is doubling every five years on average. This means those with more than 12 preference points in Wyoming will more than likely never see a good, high-quality elk tag again in their huntable lifetime once they do finally draw. A 30 or 40 year commitment just isn’t realistic for most of us. Unless of course you began your point gathering journey at the age of 20 or younger.

I think it safe to say, the CoVid-19 era has been very good to the Wyoming Game and Fish Department’s budget. The rise in applicants alone for the past two years has amounted to a massive haul of additional dollars for Wyoming to the tune of more than $2.5 million, of which the state had to issue not a single additional elk license. Not bad for some additional free money.

This might just be why more and more states, like Colorado, are quickly switching to the Arizona application model where a hunting license must be purchased before even applying for a big game tag each and every year, whether you plan to use it or not. Had Wyoming put this type of system into place over the past six years the additional revenue would have surpassed the $10 million mark. I certainly hope the crew down in Cheyenne does not get any ideas from this article however.

A few of the pitfalls to such high demand are the fact that more and more applicants are finding themselves increasingly frustrated with plummeting drawing odds in most of the states throughout the West. This is causing more and more big game hunters to leave their home states and relocate to more tag friendly states such as Idaho, Montana and Wyoming. The massive uptick in demand is also causing many of the preference point systems in the West to mathematically collapse as most high point holders find themselves between a rock and hard spot. Draw and never see another tag in that state ever again, as the line is too long, or hold on until you might be too old to actually even hunt the tag at all. Younger hunters and new entrants to the system become extremely disappointed to realize they may never have a chance at a great tag as the demand is not sustainable to even a remote chance at drawing the tag in their entire lifetimes. At this point, the demand is so high in many states, that most of the systems have mathematically reverted back to a standard random draw, with horrible draw odds.

Will this demand continue? No one really knows for sure. Some I have talked to seem to think this is a fad and will go the other way once the pandemic resides and the international and Canadian hunting opportunities open back up. I guess we will have to hang tight and hope for the best. The one silver lining is the fact that the gun and ammunition demand has put more conservation dollars than ever before into the hands of big game managers in the West and that is a good sign of things to come. Maybe these much needed dollars with help to open up new and ever expanded hunting opportunities that will help to quell the demand in some areas.