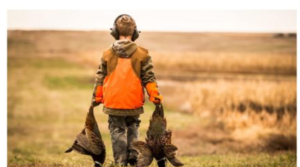 Photo and article by Adam Bender

I took this photo years ago, and was the perfect one to get my point across. Moments like this don’t happen in the not-so-distant future if we continue the trajectory we are on. Your voice Matters.

If you’ve never read a thing I wrote, make this the one, as this topic should strike a chord with you if you consider yourself an outdoorsman.

The news about a new bill just introduced this week literally made me sick. You hear me talking about the future of hunting and fishing often and this is going to directly inhibit that in a very real way if passed. I get it, it’s not sexy, won’t draw a lot of likes or shares, but I don’t take the time to do these write ups for that…it’s important to me to my core.

A Republican Representative from Georgia (yes, you read that right), has called the 85-year-old Pittman-Robertson Act “an attack on Second Amendment rights.” Taxes right?! Gotta be bad, we pay enough taxes, to hell with this act. But not so fast, there’s more to this story than the headline will lead you to believe.

For those of you unfamiliar with what this is, here’s a brief history lesson. (Now, I want you to read this and figure out how ANY part of it infringes on our second amendment rights.) Also known as the Federal Aid in Wildlife Restoration Act, but popularly known as the Pittman–Robertson Act, was approved by Congress in 1937 and signed into law by President Franklin D. Roosevelt.

The act provides funding for the selection, restoration, and improvement of wildlife habitat and for wildlife management research. The act was amended in 1970 to include funding for hunter education programs and for the development and operation of public target ranges.

Funds for the act come from an 11% federal excise tax on sporting arms, ammunition, and archery equipment, as well as a 10% tax on handguns. One-half of the excise tax on handguns and archery equipment is used for hunter education and target ranges. These funds are collected from the manufacturers and are distributed each year to the states and territorial areas by the Department of the Interior.

Now, if you read all that, you have to be thinking, “What part is a direct attack on our second amendment right?” If you can’t find one, that’s because there isn’t one. Look, I know the gun culture loves to point at the left and usually rightfully so, but this is pure lunacy from the right.

What Congressman Andrew Clyde has done is try to pander to his “right-wing supporters”, in hopes of rallying the masses, grabbing the pitchforks and showing the democrats once and for all. But sadly, he forgot to do his homework as to all the good this act does.

Look, I’m all for paying less in taxes, but this is one I’ll gladly pay and support, because I know my dollars are actually going to work toward something I love. My kids and my kids’ kids will benefit from the dollars spent in the outdoor and shooting sports community long after I’m gone because of the funding this act guarantees.

What worries me the most is how most of the hunting and outdoor industry just lets something like this slide with little to no coverage. Like, believe it or not,  this could fundamentally change the future of hunting and fishing in a very negative way, yet, silence from most. They don’t see it now, because many of the executives, C-level positions and boards who oversee these companies, simply don’t care. They’re worried about if their retirement is going to be big enough to afford that play-ranch in Wyoming or summer house on Lake of The Woods.

No, these companies, their pro-staff and influencers are far too busy on social media making trendy reels that make a difference on next quarter’s earnings forecast, right? Camo, firearm, optics, fishing and archery companies lining up their next personalities promo codes to pass off to you…the consumer. Those same companies and magazines subtly bickering about each other, taking shots at each other all while claiming how “they’re different”, but the reality is they’re all the same. Or the mega-influencers, posting content for clicks/views/likes for their own egos/business and keeping their placement atop brands payrolls and free-hunt lists for “content.”

Instead of doing something for the attention of a famous outdoor celebrity/company and tagging them, take a minute to email your state representatives and senators. While having a Cameron Hanes, Joe Rogan, or your favorite gear company reshare your IG story for 24 hours is cool, a response from someone who has the power to vote on a bill like this is a hell of a lot more meaningful. You literally voted to put them in office, and they work for you, so get involved. Your favorite brand or hunting/fishing influencer or huntress DOES NOT care about your ability to hunt and fish in the future.

Believe me, this bill is purely a political chess move, he even said so in his speech when he introduced it — calling on his democratic colleagues to pay attention. If he thinks he’s going to rally the republicans around him to fight the recent gun-control measures by the left and going after this, he’s not as smart as a lot of voters thought he was. The left doesn’t like you just as much as the right. Politics shows no favorites and the only winners are usually the politicians themselves. We, John Q Public, are stuck taking most of the L’s.

I care too much to not say anything and if you read all this, I appreciate it. Even if one person acts or gets educated on the matter, it was worth it. I am no one compared to who the outdoor industry chooses to invest in, but you’ll be hard pressed to find someone willing to do more. I’m just a dad who wants the best for my kid’s future in the outdoors.