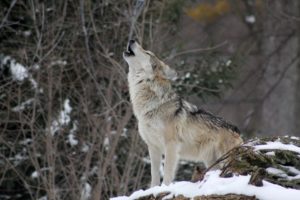 “Idaho is continuing in the tradition of the white supremacists and eugenicists who were the patriarchs of how the North American Model of Wildlife Conservation is still applied, foremost amongst them being Madison Grant, the author of The Passing of the Great Race, justifiably called ‘the Bible of scientific racism,’” said Rain, film director (Somebody’s Daughter/Family) and executive director of the Global Indigenous Council. “Grant perversely but cleverly packaged trophy killing as an articulation of conservation before seeing his theories on wildlife management transposed to human beings by the architects of the Third Reich. It’s important to understand why actions like this by Idaho aren’t ‘wildlife management’ issues to many tribal people. They are social justice issues, rooted in the epitome of systemic and institutionalized racism.”

Recently there was a settlement reached between the U.S. Department of Agriculture’s Wildlife Services, The U.S. Forest Service and the BLM vs. the Plaintiffs; Western Watersheds Project, Wildearth Guardians and Predator Defense. How does this affect you and I? Well, to keep it short and sweet, you probably won’t feel it directly, at least right off unless you are a rancher or landowner that borders wilderness study areas, wilderness or several other areas that are now effectively on hold for the next 2.5 years.

So why bring it up? Glad you asked, many of you are likely wondering why we keep wading into the political pool with these extremists and instead just keep to ourselves and focus on hunting…well, I wish that was an option. We have long passed the time of standing on the sidelines and letting these groups tear down our God-given legacy one regulation at a time. It’s rather lengthy but hits to the core of our current situation both with wildlife management and our rights as citizens of the USA.

“Let not anyone pacify his conscience by the delusion that he can do no harm if he takes no part, and forms no opinion. Bad men need nothing more to compass their ends, than that good men should look on and do nothing. He is not a good man who, without a protest, allows wrong to be committed in his name, and with the means which he helps to supply, because he will not trouble himself to use his mind on the subject.” -John Stuart Mill.

Not sure if that quote hit you like it did me, but it was exactly what I needed to hear. This article could run on and on, but I will try to keep it concise. Not only are the plaintiffs asking for $50k upfront, they are demanding another impact study to be completed in Idaho to assess wolves and how they should be managed moving forward.

Some of the primary items are:

This is a highlight of a long list for the Wildlife Services group to follow. I personally don’t know much about the use of M-44 bombs or burning dens, etc. That is a touchy subject, however, overall we know that wolves are FAR beyond their original projected population. What was supposed to be something in the 300 wolves ballpark has exploded to well over 1500 wolves in Idaho alone. Ultimately, that is a game changer and requires game changing tactics in order to prevent catastrophic damage to other species such as deer, elk and moose.

These aren’t just concerned citizens trying to save a few wolves, grizzlies or any other species for that matter. The word conservation has little to no meaning for them and their actions prove it.

“The fact that “Preservation Extremist” groups have hijacked the “Endangered Species Act”, and the “Equal Access to Justice Act” to create a lucrative business by robbing taxpayers (You and I) in order to line their own pockets with cash, under the cloak of pretending to be “Conservationists” … is appalling.”
-Justin Webb, Director, Foundation for Wildlife Management.

We are in a battle for our rights and privileges. Don’t be fooled by the wolf in sheep’s clothing. These people literally think that you and I are managing and supporting management with a plan that is…”rooted in the epitome of systemic and institutionalized racism.”-Rain and in another statement from Patrick Kelly, director of the Western Watersheds Project in Idaho… “In their zeal to reverse decades of effective, science-based conservation, Idaho politicians have not only endangered the long-term viability of Idaho’s wolves, they have recklessly promoted snaring and trapping that kill and maim both lynx and grizzly bears. This indiscriminate and senseless killing is not only cruel and immoral, it also violates Endangered Species Act protections for lynx and grizzlies, and must be stopped.” To read a list of similar and even more appalling statements you can read the press release here.

Did you know that the reintroduction of wolves into the greater Yellowstone area they speak of and the effective science-based conservation is a false claim? How can you reintroduce something that was already there and why use a different species when you do? Not very science based at all. Hmmm…Food for thought!?

At the end of the day, we know who actually spends the money and wants a balanced habitat and ecosystem for our wildlife. It’s sportsmen and sportswomen from all over the globe. We also know that you can’t get most if any of these people to listen to common sense. But we can educate ourselves, speak truth often, communicate with our elected officials and even better BECOME elected officials. This is a planned attack from the activists and we are in need of some planning ourselves or everything we know as “normal” is in jeopardy! Contact your representatives and encourage them to hold their ground. We are just now holding wolf populations steady for the first time in nearly 30 years, our children and grandchildren depend on what we choose to do today.

For further reading on the activist perspective: