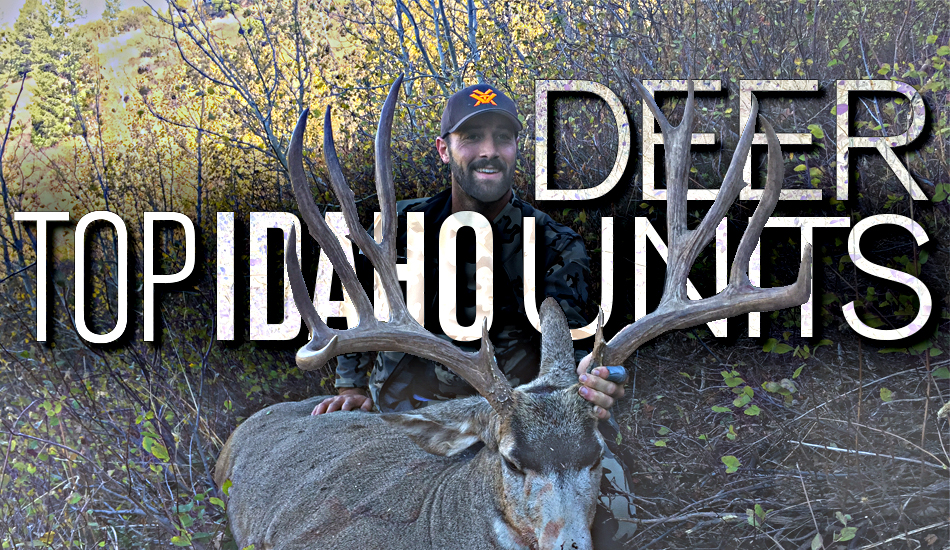 The Idaho Deer application deadline is June 5th. If you have put off your research, I’ve put together a little last minute cheat sheet to get you up to speed. The past winter was hard on the deer herds. Snowfall in most areas was well above average. Fawn mortality has been extremely high in some areas. In response Fish and Game eliminated antlerless general season hunts in the following units: 48, 49, 52, 66A, 68, 70, 71, 72, 73, 73A, 74, 75, 76, 77 and 78. What this means is there will be a gap in the age class of the deer going forward, and in the 4-6 year old group it will be harder to find mature bucks.

Surveys indicate strong survival for mature bucks. On the plus side, high snowfall can mean a very wet and green spring and summer as the snow melt lasts longer into the year. These conditions are ideal for bucks to get enough nutrition to maximize their genetic potential. It could be a good year to be in the Idaho mountains. This article focuses on limited quota hunts, but Idaho also offers an extensive OTC opportunity. If you don’t pull a premium tag, plenty of big boys can be found in the general hunts.

1. Owyhee Unit 40 has the magical ingredient to growing big animals. The habitat doesn’t encourage dense populations for deer, so finding your buck may be tough, but the quality is there. The average hunt has taken 6 days, and 80% of hunter fill their tags. 76% of the unit is public land.

2. Smokey-Bennett Unit 45 access is notably better than its cousin to the North, at about 64%. The terrain is mostly lowlands and very easy for an Idaho hunt. Draw odds are very steep for both residents and nonresidents. Harvest success has been 85%, and 90% of the bucks taken were 4+ points. The average hunt has taken 6 days.

3. Hells Canyon Unit 11 is comprised of rough and rugged country. There is decent access for those willing to put some miles in. Harvest odds and percentage of 4-point bucks are excellent. The rut hunt performs better than the earlier season permit regarding 4-point bucks, but has similar total harvest success. The average hunter has been able to harvest a deer in about 5 days.

4. Palouse Unit 11A varies substantially from agricultural to steep canyon systems. Private land is a limiting factor. Landowner permission is an essential ingredient for this hunt choice. Residents have a considerable draw opportunity. Harvest success and 4-point buck harvest have been steady.

5. Smokey-Bennett Unit 44 has excellent harvest and 4 point or better percentages. As indicated by the high tag allotment, this area has a robust deer herd. The terrain is moderate to rough depending on the area you choose. About half the unit is public land. It is likely the big bucks are far into the steep country. 170-180 class bucks are achievable though.

Schuyler was born and raised in Montana. He writes the ID and MT Member's Research Articles. He is currently a law student, but gets out with his bow as much as he can. IG: @schuylerwatt