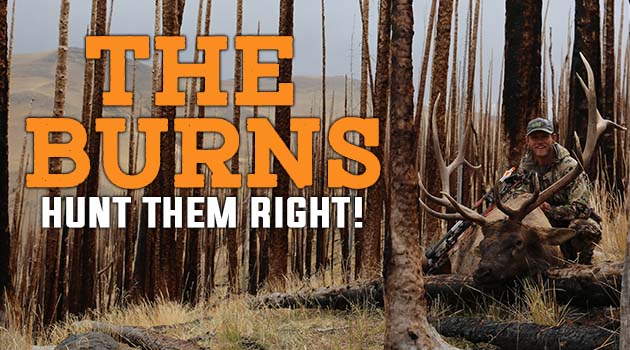 Man has a fascination with and an aversion to fire. We are drawn to the flickering flames of a campfire almost unconsciously. A forest fire on the other hand sparks fear and a sad sense of destruction in most folks. The psychology behind this isn’t something I’m going to delve into here. However, elk and deer love burns and hunters need to know the best way to pluck a trophy from amongst the charred trunks and scattered ashes.

I think most people know that hunting burns out West can be a great tactic but what many don’t understand is how to select the right burns and hunt them effectively. One cannot simply dive into any old burned area and “hunt” their way through it. The fallen and burned timber is not only difficult to traverse, shooting through it is hardly better than through an unburned forest and the dead and fallen timber is dangerous to spend a lot of time in. Not to mention that not all burns are created equal, there are factors that make some better for game than others.

The Good – “Good” burns are easy to pick out because there is game in them. This is your first clue when looking for a productive burn area. The presence of game and game sign is imperative to your success. Animals like deer and elk are attracted to the vibrant and nutritious young plant life that 2-5 year old burns foster. As burns age and the vegetation in them matures animals will depend on them less and less. That said, Elk seem to hang onto burned forests longer than deer and can be found in burned areas that are decades old.

Hunt these burns by glassing them from the angle that allows you to see the greatest amount of real estate and detail. Snow helps tremendously as animals in burned timber with snow on the ground stick out like sore thumbs while thinking they are hidden. Stalks or ambushes can be planned accordingly but remember what deer and elk can easily traverse is much more difficult for humans.

The Bad – “Bad” burns tend to be old (20 years or more) or ones where the fire burned hot enough to scorch the soil leaving behind an incinerated waste land. Burns such as these take decades to recover vegetation and sometimes never do. Animals rarely live in them until the vegetation recovers and these burns will lack fresh animal sign. Don’t waste your time on burns like these. However, if Bad burns burn again before the young trees that are growing have time to mature, parks and meadows can form creating feeding space for grazers like elk, transforming a Bad burn into a Good burn.

The Ugly – “Ugly” burns can produce an awful lot of game but are virtually impossible to hunt effectively. This type of burn consists of charred and twisted or fallen timber that will have small openings scattered throughout them. These openings are where the elk and deer will feed most often but they can be unreachable due to the nature of the burn around them. Getting in close and harvesting an animal is one thing but making a retrieval, especially on elk, from a gnarly hell hole like this can be downright dangerous. I learned this the hard way a few years back packing a bull out of a twisted maze of jackpotted timber when my footing proved unstable and I caught myself against a dead and burned tree only to have the entire thing come crashing down around me and me losing my balance and falling on a spear of timber buried into the ground. The only thing that saved my thigh from being impaled was the cell phone in the cargo pocket of my pants!

I don’t go into “Ugly” burns anymore. Instead, I wait for the animals to feed or travel out of them while I glass from a distance and then make my play. These burns can also turn into Good burns if they burn again.

The whole point here is that burns, like the forest fires that create them, are dynamic and can evolve from bad to good or good to ugly in a matter of just a couple years. The trick to finding a good burn where the hunting is productive is to keep tabs on burned areas over the course of years.

A tool I often use to keep track of burns is the Historic Wildfire Layer in my onX Hunt app on my phone. This tool lets me know where and when burns occurred and allows me to monitor whether or not I should go investigate a burn before hunting season. It’s a great tool and one I’ve used to help me find multiple game species.

CHECK OUT THIS BEYOND THE GRID EPISODE OF DAN PICKAR HUNTING RUT CRAZED BULLS IN BURNS!

FREE GEAR! How to WIN BIG with Eastmans’ TagHub
You Just Purchased a Handgun for Personal Defense,...