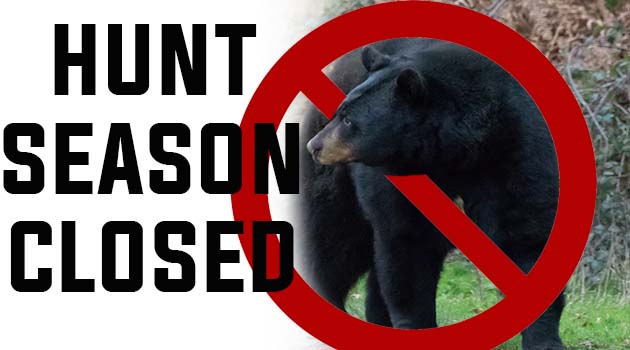 Hunters in Washington have just lost their Spring Bear season for 2022, but hunters everywhere should take note as the anti hunters will see this as a victory and look to further their agenda across the nation.  Last month the Washington Department of Fish and Wildlife Commission had a tie vote when approving the 2022 Spring Bear proposals.  Because of the tie vote, the hunt has been put on hold while the commission decides what to do.  Let’s look at what caused this outcome.

Spring bear seasons across the nation have always been controversial.  Anti hunters are concerned with cubs being orphaned, too many females being killed, bears being in a weakened state from just waking up from hibernation, are a few of the many reasons they oppose these hunts.  From a biologist and sportsman perspective, spring hunts have been very popular with hundreds of hunters applying for the limited number of permits.  Spring hunts have been effective in harvesting bears(mainly boars) which subsequently helps out ungulate populations. In the Blue Mountains of Washington, it is estimated that up to 80% of the elk calves are killed by predators each year, primarily bears and cougars.  Spring harvest also helps minimize timber damage on westside timberlands.

Here in Washington over the last several years, there have been attempts to shut down this hunt but they have not been successful until now.  In December 2020 there was a lawsuit filed to stop the Spring Bear hunt.  The state of Washington recently implemented new regulations for successful hunters to present proof of sex to a district office so they could document the low number of lactating sows that were harvested.

The WDFW staff, presented science based evidence that these hunts do not cause a concern for the bear population.  Despite this evidence, the commissioners had a split vote, and because there was not a majority vote, the hunt was placed on hold.  During public testimony on zoom over 90% of the voices were to ban the hunt.   You can bet that many of these folks were from states other than Washington.  The anti hunting crowd showed up, and the governor appointed commission, many of whom are non hunters(or even anti hunting) listened.  They voted with emotion, rather than the science and data of the Department and hunters lost another season.  It is decisions like this, that should strike fear in hunters across the West.  The anti hunting groups are getting more organized, more active in wildlife management and this puts additional hunts at risk.  With more meetings being held via Zoom, it has become easy for these national organizations to flood the public comments with their emotionally charged thoughts.

Currently there is a petition on Change.org seeking to bring back the Spring 2022 bear hunt.  Hunters can also contact the WDFW commission directly by email at [email protected] to make their voices heard.  What will happen in 2023 is anyone’s guess, but with the current makeup of the commission and the momentum the anti hunters have from this decision, getting the Spring bear season in Washington back on the books is going to be an uphill battle.  It is time for hunters across the country to join in the fight, your state could be next.

Not All Deerhunting Is The Same
Brownells Joins Firearms Policy Coalition Constitu...