How to Shoot a Big Game Animal 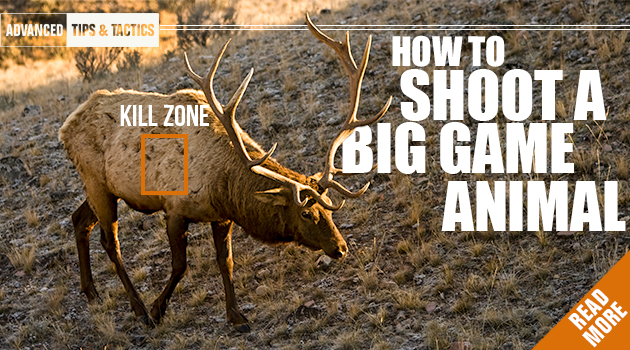 As bowhunters, we have the responsibility of taking good shots on big game animals. A good arrow setup for your bow, shot angle and reading the body language of the animal are very important components to executing a perfect shot while out hunting. So, let’s dive deeper and take a look at what exactly those look like.

Let’s start out with your arrow setup. Correct FOC and total arrow weight as well as your broadhead all have to match your bow and the game you are hunting. I’ve broken this into two categories to make it as simple as possible. If you pull less than 60 lbs. and have a draw length under 27”, I highly recommend building your hunting arrow for maximized penetration. This means a heavier shaft, a cut on contact (COC) broadhead and a total arrow weight near 400 grains. The most important component here is the broadhead. A quality COC broadhead will give you maximum penetration with your setup, but also be sure to avoid hitting any heavy bone like a shoulder.

If you pull least 70 lbs. and have at least a 28” draw length, I believe you have a little more freedom with your arrow setup. Your total arrow weight won’t matter as much, although the heavier the arrow, the quieter your bow will be, and you will have plenty of KE to take down a deer or elk. I recommend a minimum of 415–grain total arrow weight under these specs. With this kind of power, you will have plenty of energy for expandable or non–COC type broadheads. No matter what your setup is, try to keep your hunting bow shooting 300 fps or less, as broadhead flight can be more sporadic at further distances with increased speed.

A huge part of making a great shot and clean kill is to read the body language of the animal you are shooting at. There are many factors that contribute to this, from weather conditions, to how quiet your bow is and the distance you’re shooting. I think we can all agree, an animal with its head down feeding, unaware of you, is the ideal target for a bowhunter to capitalize on. Throw in a little wind noise of rustling leaves or the sound of a creek, and that animal is not going to hear your bow go off and jump the string. On the opposite end of the spectrum, you have an animal that is alert, looking and you, with ears pointed in your direction. Odds of making a clean shot on said animal drop exponentially the further the shot is. If it’s a deer or elk, you can bet it’s going to jump the string. I’ll always hold on the heart, right above the brisket, expecting that animal to drop upon jumping the string, which will still give me a clean kill.

As you can imagine, the perfect broadside shot is a great angle for shooting any big game animal with a bow. You want to stay off the shoulder blade with this shot, so anywhere mid-body and in the crease of the shoulder is going to do the job, giving you a double–lung hit and an easy blood trail to follow. Even three or four inches of error left or right is still going to give you a clean double–lung kill.

This is a favorite angle for me and a lot of bowhunters out there, as the quartering–away shot exposes the vitals and allows you to drive your arrow forward into the offside shoulder. This always results in a quick kill, but don’t expect your arrow to pass through. A quartering away shot can vary from slight to extreme, but your aiming point won’t change. As the angle becomes more extreme, your kill zone shrinks and so does room for error. Take your time shooting more extreme quartering–away shots.

Now we are drifting into the more controversial shot angles, so, hopefully, I can bring up some points that aren’t as obvious. I like quartering–toward shots; they have been very efficient for me in multiple kills, including elk. An acceptable quarter–toward shot to me is slightly or a 45–degree quarter at the most extreme angle. Just like a quartering–away shot, you have to look at where your arrow is going to exit. This determines your aiming point. On a quartering–toward shot, plan your arrow entrance tight to the shoulder and exit somewhere in the back of the lung, stomach or flank, depending on the angle you’re dealing with. This is a good angle! The path of the arrow passing through the diaphragm will result in the animal expiring quickly. The diaphragm is the fibrous muscle that separates the vital organs—heart and lungs—from the liver, stomach and intestines, and most importantly, this is the muscle that allows the animal to breathe.

Frontal shots are the most risky out of the shot angles that you can take, mostly for the simple fact that the kill zone is the smallest and room for error is nil. My rule of thumb for a frontal shot is 15 yards or closer, and I allow myself plenty of time to make a shot, especially for elk. I have shot a few smaller animals frontal but never an elk, and I am ok with that!

No explanation needed. Just don’t do it.

Be sure to subscribe to Eastmans’ YouTube Channel for more great hunts, tips, tactics and gear reviews!

How the Freshwater Mussel Apocalypse Could Impact ...
The 6 Best Do-it-Yourself Hunts in America