How Many Grizzly Attacks Is Enough? 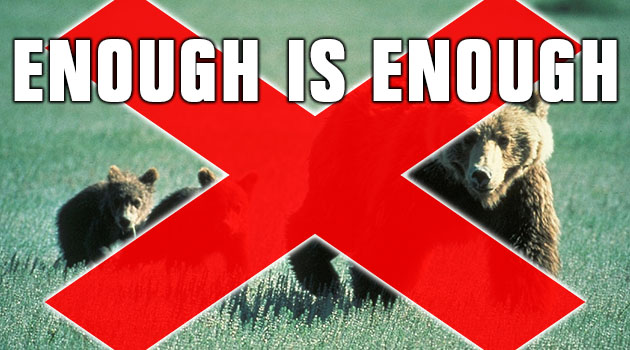 One of the most interesting and controversial topics we face as conservationists is the management of the grizzly bear. Unfortunately for us, grizzly bear management is 100% political. The lawsuits based on the emotions of environmental groups resulting in federal judges striking down management plans based on facts and numbers has grown increasingly frustrating. Hunting seasons were in place for fall of 2018 after management plans were approved by the U.S. Fish and Wildlife Service. These were blocked by Missoula Federal Judge, Dana Christensen. Later that year multiple bear attacks occurred, one resulting in the death of Mark Uptain near Jackson, Wyoming. Since then, attacks and near fatal maulings have increased, yet the opposition claims there aren’t enough bears, like the 50,000 like Lewis and Clark conservatively suggested and/or that the populations are not continuous up and down the historic range.

Grizzly bear encounters are on the rise and bears are showing up in places that they haven’t been seen in before. So far the spring of 2020 has been no different. There have been four grizzly bear attacks in Wyoming and Montana. Luckily, none have been fatal. Encountering a grizzly bear in the woods was once considered rare but now it has turned into a common occurrence in core grizzly bear habitat. But the bears are venturing beyond their “core habitat” and paying the price for it.

In 2018 alone, a sow and two cubs were caught and euthanized near Byron, Wyoming which is described as “way outside” the core grizzly bear habitat area by Game and Fish Regional Wildlife Supervisor Dan Smith. This is one of the many examples of grizzly bear incidents from 2018, which saw 64 documented grizzly bear deaths in the Greater Yellowstone Ecosystem. 45 of those fatalities were “problem bears” which were euthanized. The same year, at least 51 grizzly deaths resulted in the Northern Rockies Ecosystem. Fatalities were from a combination of vehicle collisions, euthanizations, and documented deaths of natural causes. My point? That’s a lot of bears!

Grizzlies have been federally protected since 1975 under the Endangered Species Act. In 2017, the grizzly was removed from the endangered species list and then Interior Secretary, Ryan Zinke declared that the population had “rebounded from as few as 136 bears in 1975 to an estimated 700 today and meets all the criteria for delisting.” 700 is a minimum estimate for the immediate Yellowstone area but the grizzly’s range is a far larger expanse than that.

This is very interesting to me and left me scratching my head on how many bears there really are out West since the actual number is not known and backed by hard facts as grizzly bears are probably the hardest animal to get an accurate count on due to the nature of their habits and the fact they are solitary.

Back in 2002, the USGS received funding for a project called the Northern Divide Grizzly Bear Project. The study would encompass 7.6 million acres of known grizzly bear habitat ranging from the Canadian border south to Highway 200 within Glacier National Park, the Bob Marshall Wilderness and plenty of private land with the cooperation of landowners in the immediate area. Keep in mind the study area was a broad swath of land of which 50% is roadless.

In 2003 and 2004 the plan was to set hair traps on rub trees. A total of 55 crew members in 2003 and 190 in 2004 were hired to spread out in this area and place hair traps (barbed wire) on rub trees throughout this giant study area to collect hair from as many bears as possible. Samples were collected with tweezers after the barbed wire was out for two weeks. This hair was to be studied and differentiated using DNA analysis. Out of the 34,000 samples, it was determined they identified 545 individual grizzly bears. Using their mathematical calculations they determined they captured hair samples of 70% of the population of bears in the heavily wooded study area making for a grand total estimate of 765 bears in this area.

Now, we all have known for quite some time that there are way more bears than what they say there are and this is just one case of grossly underestimating the population! Once again, this study area is a very small part of the grizzly bear’s home range, and doesn’t include the GYE’s minimal estimate of 700 bears. So we know there are a ton of bears out there and the rising number of incidents in the past decade indicate a growing population.

Unfortunately, the battle isn’t going to get any easier with the environmentalists and after an eye opening, friendly discussion with a “bear lover” it has become obvious to me that when it comes to grizzly bear populations enough will never be enough.

They want at least 50,000 bears (citing Lewis and Clark’s estimated numbers) and they hold that the real problem is there are too many people and not enough bears. This individual also indicated that she values the lives of bears over the lives of her fellow Americans. My hope is that federal judges will eventually turn to science and facts, allowing the states to manage their bears in an effort to maintain a sustainable grizzly population and keep citizens safe.

Yet, the big question is, how many more people are going to have to die from grizzly attacks and how many more bears have to be euthanized before sound, scientific management practices are put in place?