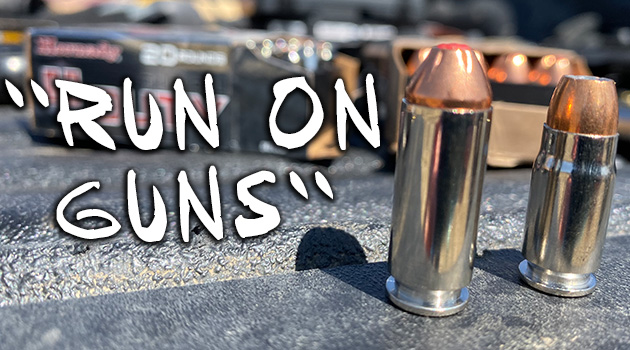 The sign said, “due to shortages, only 2 boxes of ammo per customer please.” This seemed a bit strange particularly for a Wyoming boy. Toilet paper and ammo, what is the world coming to? I thought to myself.

For the firearms industry, the outlook for 2020 is headed up and fast. Without question, there has been a “run on guns” during the lockdown of our country created by the Coronavirus pandemic. This has no doubt been a very welcome sight to a battered and bruised firearms industry which has seen its fair share of sales challenges coming off of the fear fueled gun runs seen during the Obama administration.

There’s no question, the Trump administration has been somewhat favorable to the gun and ammo industries on the regulation front, minus a few outlier situations such as Virginia, but when it comes to sales the current administration has marked a very slow sales cycle and oversupply situation coming off of the perception of what was sure to be back to back Democratic presidential administrations. But that has all changed now.

To put things into perspective, the month of April saw the largest volume of gun sales ever experienced for an April since records of such have been kept. This represents an increase of more than 70% when compared to April of last year. With nearly three million total guns sold for the month, one of the most surprising stats was the fact that handgun sales dominated the volume by nearly two to one versus long guns, which includes AR style sporting rifles. There’s no question that guns move off the shelves at a record pace in the shadow of fear and uncertainty.

And if you thought the numbers for April were surprising, wait until you see what March produced. Prior to 2020, going back to the beginning of gun sales records keeping, a single month has never surpassed 3 million firearms sales, until this past March. The month of March alone produced a whopping total of 3.7 million-gun sales in the United States. In March of 1999 barely over 750,000 guns transferred hands in this country. The state of Illinois led the pack by far with over 2.5 million guns sold, more than double the next highest state of Kentucky and more than three times that of the firearms hotbed of Texas. According to many reports from gun shop owners, up to 90% of new gun purchases during the pandemic have been to “new gun owners.” If this is in fact true the face of gun ownership in this country could be changing and changing fast. Keep in mind, the last presidential election was won by less than 3 million votes.

What’s good for the goose, is good for the gander. And with guns comes ammunition. Just ask any firearms enthusiast and they will quickly confer that certain types of ammunition are in very short supply. Handgun and MSR ammo are flying off the shelves at a record rate, even to the point where shoppers have been forced to buy what is available at the time and then match the gun purchase to the available ammunition to complete the purchase. This fact is further evidenced by our friends at Hornady Manufacturing…the place where high quality ammo is made.

“Hornady sales were strong and 2020 was looking like it was going to be a good year before the Pandemic Crisis, but once the US was locked down things changed drastically.  As soon as rumors of shutdowns and shelter-in-place orders started to circulate we began to see the distribution network drain rapidly.  The initial panic buy cleared the shelves of 9mm, 223/5.56 and any other self-defense calibers within about a week.  Since then, demand has continued to be extremely high.  As an “Essential Business”, Hornady has been fortunate to remain in production and proud to be able to continue to supply the products needed by Americans for safety and security.  And rest assured that every possible precaution has been taken to keep the workforce safe while still doing everything possible to meet demand.” -Jason Hornady, Vice President, Hornady Manufacturing Co.

The fact that shopping in general has become very complex and cumbersome during this crisis makes these numbers even more amazing and surprising to most retail analysts and media outlets.

This year has been nothing but epic when it comes to firearms sales. So far, in the first four months of the year alone, over 12 million guns have moved off the shelves of retailers nationwide according to the FBI NICS background check database. As a point of perspective this is nearly as many firearms as were sold during the entire 2008 election year, the year which dawned the Obama administration’s era of record setting gun sales.