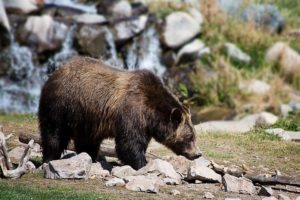 We still can’t harvest grizzly bears under a wildlife management/science-based hunting season structure with long-term management goals for the grizzly population, but scores of grizzlies are killed every year because of human-wildlife conflict. The disappointing fact in these scenarios is that much of the time, the conflicts of this nature with one of the famed grizzly bear 399 cubs, (click HERE to read the news release) can be avoided if people would quit breaking wildlife management laws, including feeding bears intentionally or unintentionally via irresponsible food and garbage storage.

The problem with feeding apex predators, as in this case, is the habituation that comes with it and the eventual and inevitable human injury or death. The bears get used to being “rewarded” for being too close to human activities because they find easy food sources. The bears don’t know the difference between someone intentionally feeding them and someone irresponsibly leaving food or garbage in places that bears frequent.

The wildlife, hunters, and the general public lose in these situations. While I’m not a fan of the continued listing on the Endangered Species Act of the grizzly bear, which leads to proposed hunting seasons being shut down, I’m also not a fan of wildlife having to be terminated because irresponsible people continue to violate wildlife feeding laws that exist for the safety of all involved.

Don’t get me wrong, human life needs to be protected and measures need to be taken to do so, but if we had the regulated hunting seasons that are needed to help manage grizzlies, they would have a healthier fear and respect for humans and would avoid them at all costs, thereby reducing the number of bears needing to be euthanized which is a far greater number than what a regulated hunting season would account for.

Hunters participating in regulated hunting seasons are the best conservation participants in history, not the people who are breaking the law by habituating grizzly bears to human presence.

No matter how much of a “good Samaritan” you deem yourself, don’t feed the bears! As I said above, everyone loses when this happens including hunter-conservationists, non-hunters, wildlife, etc.

Are These the Best RV Road Trips in the U.S.?
Everything You Need to Know About Starlink Interne...