Going Solo: Its All On You 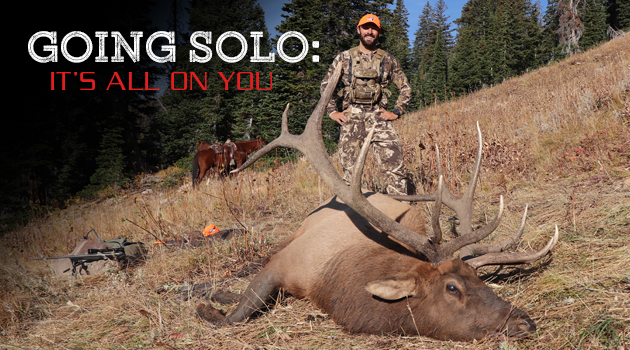 As summer approaches, tags are being drawn, plans begin to form, everyone is getting excited for the season ahead. I was lucky enough to pull a challenging mountain goat tag in my home state of Wyoming, which is going to take me into entirely new country. I’ll be spending a lot of time in unfamiliar landscapes. I already am planning scouting trips to this new country, in hopes of finding legal goats, but also possibly a big highcountry buck or two as well. I know I will be spending my time alone like usual. There is something to be said about solo hunting. For me, it is my preferred method. Though I enjoy sharing time in the hills with friends, I truly enjoy the challenge both mentally and physically of hunting alone.

The longest solo hunt I have personally done was 13 days straight in the Frank Church Wilderness back in 2007 while pursuing my once in a lifetime bighorn ram. By the end of two weeks without seeing another human, I was at the point of losing arguments with my horses. It was the mental aspect that began to take its toll. Going days without even seeing a sheep made staying positive challenging. I kept focusing on the adventure, and not the hope of success. I was alone in one of the most remote landscapes of the lower 48, and every decision and move I made was mine to choose. In the end, I almost gave up, but forced myself to climb one more mountain, and it was the reason I punched my tag. I have yet to have a hunt challenge me mentally as that sheep hunt did, but it also taught me what I could accomplish if I overcame the feeling of being mentally defeated.

For some, the idea of spending days alone in the mountains is not something they are comfortable with, or even care to do. But, I think being a solo hunter has made me a much better hunter overall. Though it is great to spend time in the hills with friends and family, being alone changes the way you look at everything. Every decision and step you take, is entirely yours to choose, and the only one second guessing you, is you.

As a dedicated highcountry mule deer hunter, I spend a lot of time alone in a tent in the remote mountain peaks of western Wyoming. I second guess my decisions all the time! Did I leave that basin to soon? Did I miss a giant that I’ll never see now? Should I have glassed that other ridge tonight? Being alone gives you plenty of time to question yourself, but at the same time gives you the freedom to cover country however you want. I have a constant desire to see new areas, go over the next ridge or peak, and see what could be there. Even though I have numerous spots I know will hold a big buck or two on a yearly basis, I still always find myself exploring entirely new country. I refuse to get set into the same routine, because I like the challenge of finding new areas and learning more about the country the animals call home, while at the same time always challenging myself to be successful in new circumstances.

If you have ever considered going at it alone, but have never taken the plunge. It is one of the most rewarding experiences when it all comes together. It will push you to challenge yourself in different ways aside from what the mountains already will. Last fall, I had a dream season that ended in leaving the mountains on separate solo hunts with both a bull and buck of my dreams. As I daydream about what is in store this year, I already know I’ll be put to the challenge of finding a mountain goat in extremely rugged country with low goat numbers, and I can’t wait to push myself and see what will happen. If you decide a solo hunt is in your future, remember to find positive things to focus on even if things aren’t going like you hoped. Anytime you’re in the mountains is a reason to smile, and the chance to pursue the animals that call them home is just a bonus.

Sportsman- What’s in a name?
Moose Poaching – Know Your Target!