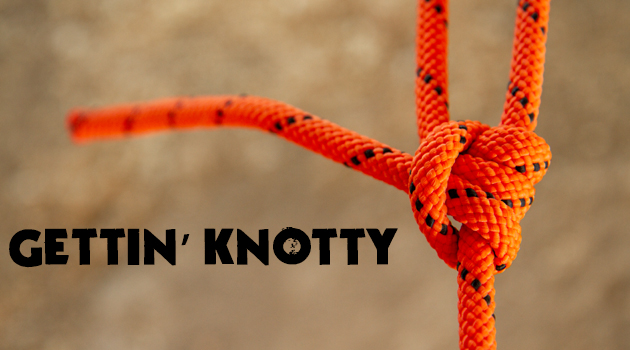 Knots, knots, knots. Growing up I learned knots at an early age. Tying knots is a habit I don’t think about now but I have found the majority of hunters out there don’t know how to apply a knot for a given application. However, if you were never educated on knots and their application, where would you learn them?

Knowing knots and their applications makes your life easier. It makes you more efficient. And, knowing the right knot can even save a life. Here are six basic knots that are a must-know on any hunting or camping excursion.

The bowline is a simple knot used to form a fixed loop at the end of a rope. This loop will not slip as long as it’s tightened properly. It is easy to tie, and importantly, easy to untie even after subjected to a heavy load. This knot is commonly used by rock climbers for rappelling or as a rescue loop. Be sure to tighten all ends of the knot evenly and equally. I don’t use this knot much but it’s imperative to be proficient at tying.

Used for rescue of an animal or person. It’s also a safe loop to tie around the neck of a horse or mule.

Pros – Easy to tie, will not slip under a load.

Cons – It can become loose and slip sideways when it isn’t under a load or if it’s tightened incorrectly.

The sheet bend has the same structure as the bowline but it is used to connect two ropes together, specifically two different-sized ropes securely. Once again, all ends and tag ends of this knot need to be tightened evenly and the tags ends must end up on the same side of the knot. The knot requires small amounts of rope and can be tied in seconds.

You can guarantee that if you set up a camp with buddies, you’ll all have different-sized rope. The sheet bend is perfect to add length to your tarp or tent guy lines, especially with different diameter ropes.

Cons – A sheet bend tied left-handed will slip and release even under a moderate load.

The two half hitches may be the most useful knot out there. I use it the most in everyday life for tying a rope to something like a post, hanging meat quarters or building a string loop on a bow. You can even tie to your buddy’s Chevy when you have to tow him home. It’s best used as a gripping knot around anything you can tie a loop around. It works well under pressure and won’t come untied if tightened well.

Use to tie quarters to a meat pole, tie guy lines to tarps, attach paracord to your pack frame, etc.

Cons – Not as strong or doesn’t grip as well as the taut-line hitch.

This is my favorite knot. There are many different variations and names of the taut-line hitch. The midshipman’s hitch, tent-line hitch, rigger’s hitch and adjustable hitch to name a few. The taut-line hitch is an adjustable loop knot used for lines under tension (e.g. tent guy lines). It is useful because the length of the line can be periodically adjusted under tension while keeping its hold. It’s most common uses are for tent lines, holding secure loads on vehicles, tying off your game gambrel and tying down aircraft.

The taut-line is most used on staked out tent lines, or any time you need an adjustable length of a tie-down rope. Used as a finishing knot when tying meat to your pack-frame with paracord.

Pros – Easy to tie; easily adjust the length of the rope, works best under tension

A clove hitch is considered one of the most important types of knots and is also referred to as the double hitch. A clove hitch is simply two successive half hitches around a round object like a wall tent pole or tree, etc. Also, a clove hitch is used to start off and secure a lashing, such as the square lashing.

I use this knot for securing the sides of wall tents and for securing lashings. The quick-release version is also very handy for securing a load to a tie-down object as it is easy to untie the knot under extreme tension.

Cons – Can be difficult to untie unless incorporating a quick release.

A square lashing is a type of lashing use to bind spars together at a 90-degree angle. There are different types of square lashings but they all consist of a series of 3-4 wraps and fraps between the spars. The lashing begins with a clove hitch, followed by the wraps and fraps, concluding with a clove hitch that secures the lashing. This lashing can be used to secure a meat pole, building a corral, a hitching rail, or building a wall tent frame. If tied with precision, this lashing is just as secure as a steel spike or nail.

On occasions where I need to build a meat pole for my quarters, I use this lashing to secure both ends of the pole to tree trunk.

Pros – A square lashing can be used to construct about anything with 90-degree joints without using nails.

Cons – A lot of rope is needed, usually around 15 feet, depending on the size of your lashing.