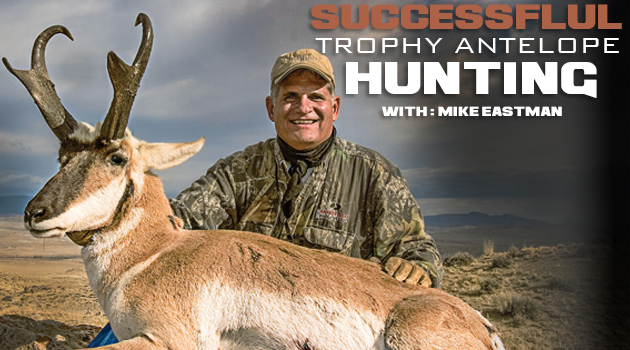 Many hunters consider an antelope hunt as an afterthought on their way to or from elk and mule deer hunts. For them, the opportunity and challenge of taking an excellent trophy antelope is lost. Whereas taking multiple trophy mule deer bucks, for example, is a difficult accomplishment, harvesting several DIY B&C antelope bucks is actually an attainable goal.

My four key strategies to successful trophy antelope hunting are actually quite basic.

First: There’s the strategy of hunting the same quality area each year that you draw a tag. Stay the course, don’t get discouraged or jump around to different areas or states. I know several guys, myself included, that have taken numerous book heads out of the same area over the years. The area that I hunt now isn’t noted for a lot of book antelope but my ability to know where to look and what country will hold antelope in certain weather conditions puts the odds in my favor.

If you’re serious about harvesting a book buck, that’s the #1 strategy for success. Using that tactic, you’ll become an expert in hunting a particular area. Book bucks on public land are few and far between; knowing the ins and outs of the country will give you an edge on locating that 1 in 500 buck. The odds of harvesting a trophy buck antelope increase considerably if you’re in familiar territory. I’ve taken many B&C antelope and the key element to my success is knowing the unit inside and out. That’s the single best piece of advice I can give you. Many states change their unit numbers and hunt dates from one year to the next, so keep yourself abreast of and up to date on each state’s proclamations and regulations.

Second: Learn how to field judge and know what makes up a big buck. An antelope buck is one of the hardest trophies to judge in the field. Many good bucks have been passed up because of hunters’ lack of knowledge. I have a whole section in my book Hunting DIY Trophy Antelope on field judging. Along with that book, Eastmans’ Publishing has an Antelope Safari DVD giving more information on field judging. If you’re truly interested in collecting a record book buck, both are worth the money.

Third: Personally, I like to hunt bucks after the rut in October. During that phase, antelope are gathering up for the winter and if you know where the staging areas are, you can find herds numbering 30 or more. With the breeding over, bucks and does will run together. It’s amazing to me how the bucks tolerate each other at this point, only days and weeks after they were trying to beat each other up. Like I’ve stated before, this is a really good chance to finally find a big, old buck that has up until then, hidden out all fall in an isolated pocket.

The natural inclination is to assume that with all those 8X eyes, you’re not going to get in close enough for a stalk. However, my experience is that at that time of year, antelope feel more secure as a group. I’ve had herds run off only a few hundred yards and then stop to look at me. They would be standing as if I was miles away and not a bit spooky. I think it’s because the animals have a sense of safety in numbers.

October in the Western states weather can be on the threshold of winter. I use that to my advantage, not only for locating a trophy buck but also in the stalk. Let’s look at some weather-related circumstances that can play in your favor.

A snowstorm can be a huge plus for you. I’ve been able to make really close and successful stalks (getting to within 200 yards of bedded antelope) when it was spitting snow. I believe those 8X eyes are actually a disadvantage when snow is falling because it blurs their vision. For whatever reason, they seem to have a hard time clearly discerning shapes in a snowstorm.

I‘ve said this before, but in flat light, either in the morning or evening, antelope also seem to have a hard time picking up detail. During the middle of a gloomy, rainy or snowy day their vision is drastically hampered. I make it a point to hunt antelope on those days, but bear in mind, antelope will usually be lying down in a hard rain. In a snowstorm, I’ve seen antelope group up and roam around. If you can get around out in the plains during a light snow – do so.

During the late season, say from mid October on, I can locate smart bucks that have hidden all fall in isolated, hard-to-find pockets. Those pockets are in rugged terrain, hidden from the view of the general hunter who only hunts flat terrain. It’s also a great time to find bucks that up until that point might have been summering on private land. It’s also very important to determine what time of the season is the most effective to hunt. If the population moves around in the unit, an October hunt when the snow is spitting might be the right medicine for finding a trophy.

My son Guy took advantage of an early fall snow during Wyoming’s 2005 antelope hunt. Throughout the season, he located several B&C bucks in the low-80s class but nothing in the mid-80s. Finally, on October 20, the last week of the season, a storm came and dumped about 6” of wet snow. When the storm finally moved out it got cold and clear. Antelope then began moving through the area, including bucks Guy hadn’t seen in two weeks of rut hunting.

On the second day after the snowstorm, we found a real toad hanging out with several does. That big buck was bedded on a ridge about 500 yards away. I know for a fact that he had moved into our country from private land.

As Guy was making a stalk, a very heavy squall came in and gave him even more cover. You know, if it had been a bright day that group would have been watching us like hawks. Guy was able to harvest the buck at 200 yards as snow was spitting down. Getting within 200 yards of an old buck like that can only happen if you get the weather in your favor. The point of this is that with a little weather and knowing the migration paths, you greatly increase your odds of connecting with a great trophy buck.

Fourth: The game changer for hunting public land – it’s the ability to know what is private and public and where you stand. The little chip made by onXmaps takes all the guesswork out.

Last fall I was hunting antelope in my favorite unit in Wyoming. I have harvested many trophy bucks over the last twenty-some years from this unit. Well, this one road goes into a big ranch and signs on the cattle guard of course say no hunting or trespassing. But with the onXmaps Wyoming chip I located a little strip of public land that followed the fence line and made its way into a huge section of public. It showed me all the untraveled two-track roads and where they went! And of course I ran into hundreds of antelope living in this obscure area tucked away behind that ranch.

With the information from this chip you can find those hard to find public lands that the average hunter won’t go into. The chip is built for GPS, which I like, or you can download it to your mobile device as well. You can purchase chips for each individual western state for all the big game species. Some of the information you will have access to is the unit borders, updated land ownership and PLAT data statewide, updated Hunter Access Program (HAP) & Commercial Forest Program lands, road types and updated 24K.

The improvements to water and geographic features really helps in locating those water sources in arid units where water becomes an important part of keying in on herd locations. A big plus is most game and fish agencies like the Wyoming Game & Fish recognize the information to be accurate. Heck, Wyoming Game & Fish even sells it to the general public. Go to http://www.huntinggpsmaps.com/ for information on this public land game-changer product.

Less then 1% of North American big game harvested goes record book. By using those four hunting strategies, I have harvested numerous trophy bucks in almost every western state. So I’m sure these four strategies will also help you reach your goal of harvesting a rare B&C trophy.

How to Select a Treestand that's Right for You
Top Midsize and Fullsize Hunting Binoculars Put to...