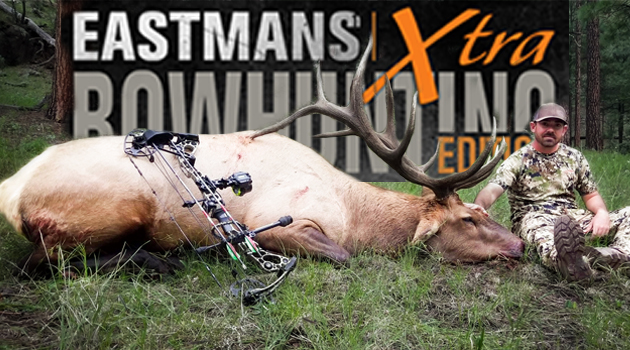 As I ran up to my wife, Sharla, she was crying and telling me she had just, “ruined the hunt.”

It had been 11 hours since I had first hit the bull, and we were back in the game!

When the bull stepped into the clearing, he was at 23 yards and moving closer. At 19 yards, he stopped and quartered slightly toward me; it wasn’t ideal, but he was so close, and the moment was so intense, I picked my spot and sent the arrow home. The arrow buried into the bull, passing through one lung; the bull whirled down the hill, looked back toward us for a moment and then bedded in the heavy brush.

Jimmy approached, and we all decided we should wait and give him plenty of time. After 3.5 hours, the moment had again become overwhelming, and we decided to ease down into where we had last seen him. The musky odor of the bull had been present for the entire wait, and we were quite convinced that he was still there and most likely passed.

We were wrong. As we approached the last place we had seen the bull, he exploded out of his bed and headed into the wall of timber that surrounded us. I couldn’t believe it; we were devastated. We pulled back again, and decided to give him some more time. We had all but decided to leave him for the night, when we realized that there was a very real storm headed in our direction, and all the sign was sure to be lost. The odds of finding this bull seemed to be getting worse and worse by the second.

It dawned on me that I hadn’t seen my wife in some time; I asked Jimmy when the last time he had seen her. About then, I saw her in the distance; she was a few hundred yards down the ridge, waving her hands frantically. I grabbed my bow and sprinted toward her. As I approached, I realized she was crying.

She had come around a corner, making her way back to the last place she had seen me, and stumbled into the bull. She thought that he had passed and walked up to him, when he stood up and stumbled into the brush again. The broadhead had opened something new inside of him, and he was bleeding heavily within 10 feet of his bed. The trail became easy, and we moved up it at a fast pace, finding my bull a short distance from where my wife had jumped him.

ABOUT THE AUTHOR:  I am 36 years old, born and raised in Las Cruces, NM. I Love being outdoors with my family.