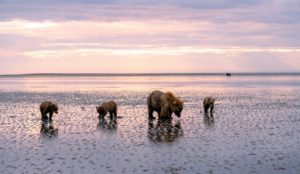 Before you roll your eyes and keep scrolling, let me explain. . . I don’t mean that Covid 19 has directly affected bear behavior via infection, I’m talking about the effects Covid had on outdoor recreation and the ripple effect all those extra people in the woods and mountains had on animal behavior.

In 2021 there were 5 bear-caused fatalities in North America. 2022 recorded 7 attacks before June and that doesn’t count the famous mauling of the Wyoming college wrestlers in the fall. Those numbers are alarming and higher than the historic norm. So what’s changed?

There is little debate that over the past two years more people than possibly ever sought solace in the great outdoors. The aftermath of Covid 19 restrictions was a flood of folks who wanted nothing more than to get out and recreate. An awful lot of this recreation took place in areas frequented by bears and the result has been bolder bruins who aren’t as afraid of people as they should be, even seeing them as a food source, either directly or indirectly.

I pitched my elk camp this past September in a mountain range that sees its fair share of human traffic. There are black bears there but they are seldom seen. . . on a normal year that is! Being privy to a lot of hunting information thanks to my job as Managing Editor for Eastmans’ Hunting Journals I got to read two separate  hunting submissions from the same mountain range my camp was in and both featured not only bear sightings but bears that were openly curious and even aggressive to the hunters in the stories. Odd, but whatever, bears are unpredictable.

Fast forward to the end of October and I was back in the same mountains chasing elk with my rifle. I had occasion to visit with a Forest Service Ranger who was making his rounds checking camps. He was an older gentleman, 30+ years of service, 20 in the area in question. Eventually, he asked me if I’d had any problem with bears in my camp and went on to explain that he’d investigated almost a dozen bear incidents this past summer and fall of bears doing damage to people’s property in camps.

Now, I’ve spent my entire life in bear country and have only had a handful of negative encounters with bears, both black and grizzly, only one of which was in a camp setting with a marauding black bear who bluff charged me over some items he’d stolen. So, to hear about this many bear incidents where there are normally few to none was interesting and got me to thinking. . . why is this happening? He also said that his “Forest” wasn’t alone as bear incident reports were up all across the West, mostly black bears in heavily recreated zones.

As our conversation continued he also alluded to the fact that the amount of litter and garbage left behind the past couple of seasons, mainly during the summer, thus NOT hunters, was way up and was the biggest contributing factor, in his mind, to the increase in bear incidents.

What I’m getting at here is that thanks to Covid 19’s driving scads of people to the outdoors, a lot of whom apparently didn’t keep clean camps and left trash in their wake, we have bearswho’ve grown accustomed to scavenging off of people’s mess and losing their inherent fear of humans. This has seemingly led to an increase in human/bear conflict. . . shocker!

If all this is true and I’m betting you anything it is, it means that we all need to be more well prepared to deal with aggressive bears. Make sure your camp is clean, you move about alertly and have either bear spray or a firearm and you know how to use them effectively.

One more factor. . . the increase in aggressive bear and even mountain lion encounters the past few years also points to what happens when hunting seasons are heavily restricted or eliminated and human presence increases. Animals get accustomed to humans on the landscape who aren’t a threat and being predatory by nature, those animals test the boundaries of the predator/prey relationship.

As not only THE Apex predators but also the stewards of the natural world we owe it to the animals to maintain balance. That means clean, healthy environments and respectful fear and appreciation of one another through proper relationships.