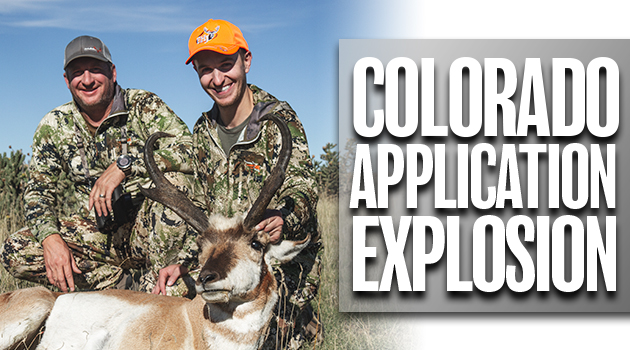 Please Welcome All Your New Friends

The Colorado numbers are out. In 2018, applications for sheep and goat are way, way up and your future draw odds will drop dramatically for bighorn sheep and goats.

If you applied for Colorado Rocky Mountain bighorn sheep as a nonresident in 2017, you were 1 of 3,728 applicants going after 28 licenses. For 2018, you are now 1 in 14,134 applicants. That is not a misprint. That is 504 applicants for every license. If they cut off all new applications forever, it would take 504 years for everyone to get a license. Not planning on hunting that long? Bummer.

Wait, it gets worse. If you put in for desert bighorn sheep, you are now 1 in 1,732 nonresidents going after 1 tag in a random draw. “So, you’re saying there’s a chance!” Yes, 0.058%, surely the world’s worst odds on a sheep license. Remember that Methuselah lived 969 years, one lifetime too short to be guaranteed a Colorado desert sheep tag.

Bad News for Residents Too

In fact, all these jumps are probably just the beginning of sorrows, because how many hunters in America know that Colorado cut the price of applying for trophy species by 99%? What happens when they find out with a $10 habitat stamp, they can apply for as many seven Colorado big game species as they want for $3 apiece? Many more are likely to jump in next year and the year after. Heck, at $3, might as well put in for the wife and kids too!

The competition doesn’t really start for three more years because it takes that long to accumulate three preference points and start earning weighted bonus points, without which you cannot draw a Colorado sheep or goat tag. Those currently in the system will always have more points than the new kids.

The problem with both those ideas is that random numbers will become far more important and hard-earned points less so because there will be so many more people at each point level. And, all those new applicants will have chances to draw low random numbers. Points will become less valuable. It distorts the draw to the disadvantage of those already in it and that’s a problem. For those just starting out, this is a disaster.

The same rule change on payments went into effect for deer, antelope, elk and moose. From what I’m hearing, resident applications may have gone up 25%-50% and more than 100% for nonresidents in 2018.  What’s more, the point jump will begin immediately. Many hunters are going to be very disappointed come June 4-8.

Points needed will jump mainly on the lower end this year and it will be worst for 0-point hunts, but they won’t be the only ones. Next year, the flood of applicants will swamp 1-point hunts and so on each year. You’re going to see points go up like you’ve never seen in your life as tens of thousands of new applications roll in over the next couple years.

If you have a low-point home unit you like to hunt often, you should be very nervous about this. I am especially concerned about elk and moose, but I expect to see a noticeable impact on deer and pronghorn too.

Be nervous too if you have a lot of points, because as soon as you cash them in, you go back to zero and get stuck behind this new pig in a python with more points than you. Good luck drawing a good hunt again.

What the Heck Just Happened?

Answer – a well-intentioned change in regulations that allows everyone to put off payment for a license until they are drawn and allows the State to avoid the millions in credit card merchant fees from all those applications that were not drawn. It seemed like a good idea at the time, but apparently no one predicted the mass influx that occurs when you cut the price of something by 99%, from $2,234 to $13 on RM bighorn sheep and goats. I guess no one studies microeconomics anymore. I know that CPW wants to expand the number of hunters, but when the vast majority of licenses are oversubscribed it makes no sense.

Little did we know that when the CPW petitioned the State last year to allow it to operate as a business that it would mean not only raising license costs for hunting and fishing and park entrance fees, but they would unwittingly destroy future nonresident trophy species odds and double the future competition for resident applicants in just the first year.

At this point, some readers are saying, what’s the problem? Sheep and mountain goat hunting should not be just for those that can afford to put thousands of dollars on their credit cards every spring. Give everyone a chance.

I’m somewhat sympathetic to that because I refuse to put much money on plastic. I also spent several years working construction, driving a truck and raising four kids. Believe me, I know what a low checkbook balance looks like.

The problem is that this is another example of a draw system collapsing under the weight of tremendous demand for a very limited number of tags. When there is no more hurdle than $3, a fourth the price of a movie ticket, to apply for bighorns and you can apply for big game hunts in Colorado for $3, so many people with little real interest or commitment flood the system that it destroys the weighted point system and basically turns it into a messier version of Idaho’s random draw system. When ten times the number of nonresidents apply (up 4-5 times this year and probably again over the next couple years), the 10% nonresident cap on sheep and goats ends up looking like a 1% cap for an individual applicant. Surely, requiring some sort of commitment to cut down the number of applications is reasonable. And if a person can pay the $2,217 when they draw the tag, they can certainly afford a refundable $2,217 to apply.

What’s Going to Happen Next?

The CPW has got to halt the stampede. So, the next step may be requiring that people buy a nonrefundable general license up front. Every other state either requires that or payment for the tag upfront. That is, except Montana on sheep, moose and goats. You could also see the CPW charge for preference points regardless of whether an applicant held a license the previous year. That would be in line with other states, though it would have little effect on skyrocketing applications. Neither change would be good.

A better option is for them to admit that they missed a huge issue and reverse a bad, though well-intentioned regulation. On merchant fees, 1) just budget for it, maybe use part of the increase in license fees they got in March or 2) pass the small charge on to the applicant and give them the option of an ACH bank draft for no fee.

If the CPWW wants to run itself as a business, it needs to learn that when a mistake is made, it must own up to it quickly, apologize and correct it. Don’t defend, make excuses or drag it out.

If you live or hunt in Colorado, you need to raise hell with the Commissioners and CPW senior staff.

You will find the dates and places of upcoming Commission meetings here. http://cpw.state.co.us/aboutus/pages/commission.aspx On the left there, you will also see a link to the names of the Commission members with their contact information.

Remember that Wyoming is considering the same change right now. If you’ve hunted in The Cowboy State lately you probably got a survey on this. Of course, you probably didn’t know then what you know now. Make sure you contact them and let them know what you think, even if you returned their survey.

If you live or hunt in Wyoming, https://wgfd.wyo.gov/About-Us/Game-and-Fish-Commission will give you the names, contact information and scheduled meetings of the Wyoming Game and Fish Commission. Speak up now or deal with the same mess as Colorado.