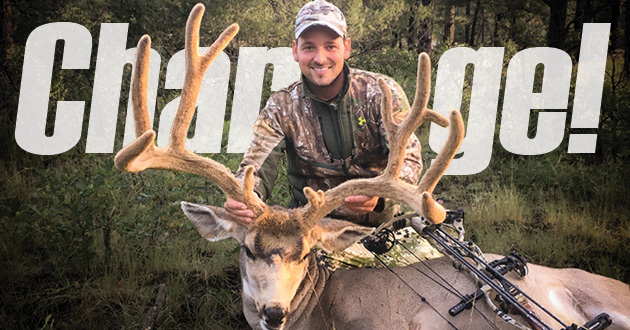 It was a foggy Saturday morning, September 9th, 2017. Walking in the dark, I was hoping to get to my spot ahead of where the deer tend to cross on my favorite ridge. I found about six nice deer as the sun came up that were on the wrong side of the fence. I watched them for a while and decided to keep moving. About 800 yards up the trail I spotted another group of bucks. I hit the ground and started crawling. It took me about 30 minutes to gain 100 yards on them. They were slowly feeding away from me, with the wind headed my way. 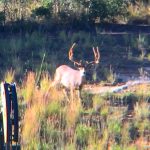 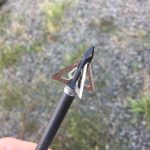 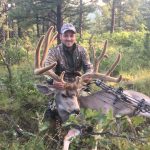 They were dispersed amongst the shadows of the pine trees which made it hard to make them out. The big buck I’d been searching for was in the lead and I finally had a shot. I had to calm myself down and focus on waiting for the right time. I ranged him at 45 yards. I sat up and drew as he stepped out from behind a large tree. I released and watched my arrow fly perfectly. Just before my arrow got to him, it took a dramatic turn. I didn’t see the branch right in front of his body. I couldn’t believe it. The arrow deflected and hit below him. I couldn’t believe my eyes. The bucks ran off and I walked over to grab my arrow. I was completely disappointed in myself. All of the preparation and practice, and I blew the shot.

The arrow didn’t spook them too badly. Luckily, they hadn’t seen or smelled me. I decided to sneak down the valley and see if I could find them again. No more than 30 steps and I froze. There he was, staring me down at 51 yards. I’d practiced at 70 yards all summer and I knew I could make this shot. I drew and released. Impact! I watched my arrow bury just above the center of his chest, exactly where I needed to hit. Immediately he charged straight at me. My first thought was that he was coming to take revenge on me! I panicked and tried to nock an arrow. He ran by me at no less than five yards as I fumbled another arrow onto my bow. He ran another 20 yards and hit the dirt. I heard his final sigh and he breathed his last breath. I threw hands up with my bow in hand. I couldn’t believe that was able to take such a beautiful animal.

My good friend Chris was right behind me on the ridge and saw my excitement. We walked over to the deer together. He didn’t know which buck I had shot. When we got to him, Chris looked at me and said, “Oh wow, that’s him! You got him!” We admired him for a couple minutes, and I said my thank you’s. This hunt will be ingrained in my mind forever.

About the Author: I’ve grown up hunting my entire life. My dad is an avid outdoorsman that has taken me hunting since I was a little kid. Almost all of my hunting has been in Colorado and southern Wyoming.