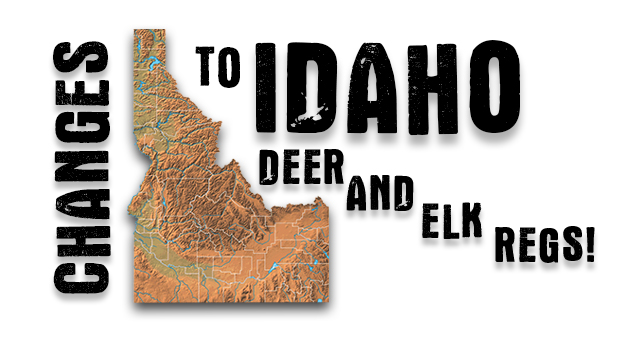 2019 marks the start of another cycle 2-year regulation cycle for Idaho. IDFG has held 30 meetings throughout the state and offering online comment forms. Nearly 1300 individuals attended these meetings and roughly 3000 comments were submitted online. With that said, voices were heard and due to that, existing proposals were altered to fit the comments and concerns provided by the public. Although there weren’t any major changes proposed, the following is a quick overview of what we felt are note-worthy changes that we expect to become final for the 2019/2020 regulations.

Panhandle-Region: The mule deer populations in this area have been stagnant according to biologist data and resident sportsmen, thus Unit 1, proposes a season length decrease to help reduce harvest and stabilize this mule deer population.
Clearwater-Region: Units 11, 13 and 18 will see a substantial quota reduction in controlled hunt tags for mule deer both aerial surveys and public comment supported this measure.
Southwest-Region: New youth hunt in Unit 39! And tag increase from 500-1500 in the controlled hunt. Big red flag for hunter pressure increase. There is a lot of land to go around and 77% is public. I still hate to see that many hunters in the hills at the same time…we shall see.
Southeast-Region: Unlimited Controlled hunt in unit 73 will see a reduction in the NR tag allotment, but not until 2020. Currently NR’s have 35% of the tags the new proposal is to drop that to 15% or 240 tags.
Upper Snake-Region:  The past 2 out of 3 winters have hammered this area, hunter reports and flight surveys indicate low populations, the proposal is to eliminate either sex controlled hunts in units 66 and 69 and a 50% reduction in Controlled Antlered hunts for 66 & 69.

Elk City Zone-populations are below objectives, the proposal is to cap A tag opportunity at 80% of last 5-year average and reduce antlerless opportunity in Muzzleloader and Archery Only hunts.
Southwest Region: Brownlee Zone, biologist data supports additional bull harvest opportunity, so the public comments suggest adding an either sex youth hunt. I love to see this, great way to pass it on guys and gals!
Southeast & Upper Snake-Regions: Diamond Creek Zone, beginning in 2020 we will see the nonresident tag allocation go from 35% down to 25%. Moving 184 tags from the nonresident pool into the resident pool.

Sawtooth zone: This highly coveted tag sells out in minutes and has caused quite the controversy in the past. IDFG is proposing to increase the A tag allocations to 1,000 either sex tags, and the B tags to 1,800. This is another area where hunter pressure is going to be tough. For those willing to get out and away from roads and trails it will still be a solid hunt, but I am concerned for the high pressure that hunters will see.

Take-Away-2019/2020 has a lot of red line changes in the regulations, many of which we will capture in more detail in our Members Research Section coming shortly. However, most of these changes are what we would consider “status quo” and don’t rock the boat much for hunts in 2019. For details on these changes and more please visit the IDFG website at idfg.idaho.gov, is it September yet?