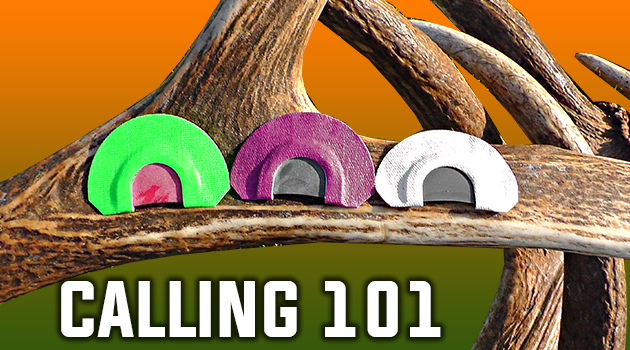 Calling elk on public land can be the most difficult task for any bowhunter. It is rare to see a 330 bull come in to calls like you see on TV, especially on public land.

The easiest bulls to call are satellite bulls. The only problem is these are rarely the biggest bulls in the area. Big, mature herd bulls with cows are the hardest to kill simply because they are surrounded by a lot more eyes and they won’t want to leave their cows.

Remember, all of the calling tactics listed below work best if the person calling is back 50-100 yards from the hunter, depending on cover. You can call solo and be effective, you’ll just have to be more careful using the terrain to hide your calls and direct your calls back behind you.

Pre-rut is usually is the first 10 days of September. Bulls are rubbed off by then, polished, wallowing and ready for the rut. They are competing for dominance and looking for cows, which results in them being very territorial. In my opinion, this is the best time to kill a big bull. This is when they are the most susceptible to calling. From my experience I have found solo, mature bulls bugling the opening week of bow season in Montana that came galloping in, blowing snot with fire in their eyes. The key is to find a big mature bull before he has cows. In this instance, once I locate a bull, I like to sneak in within a 100 yards if I can, the closer the better. I’ll start with some soft cow calls followed up by a couple squeals on the bugle. The idea is to create the sounds of cows with a young bull.

I have seen the most rut activity the 17-27th of September. During this time, bulls have the cows broken up into harems and bulls are fighting over real estate or pushing cows back and forth from feeding and bedding areas.

Calling in a big herd bull during the rut is pretty tricky. If a mature bull has a harem established, the odds are against you. I have found that if you sit there and call at him from a few hundred yards away, he is going to push his cows away and leave. A herd bull will avoid confrontation if he can. Your best bet is to get as close to him as possible before calling. Let him talk and get into his “kitchen”, which is usually less than 75 yards in the timber. The more eyeballs that are around him, the harder it is.

Sometimes it’s not even possible to get close enough because it’s too open or the topography doesn’t provide enough cover for you to do so. Wait until he makes a mistake and gets into a position where you can get close. Once you get in close, challenge him with an aggressive bugle. If everything is right he will want to kick the intruder out of his area, which can make for an exciting hunt. Also, use elevation to your advantage if the wind allows for it. Being above a herd bull makes him feel more threatened.

Hunting post-rut bulls is no easy task either. In most cases, once October hits, the rut is winding down. This varies on geographic location. During this time of year, I rely on spot and stalk tactics. However, if you can find a solo bull and sneak in close on him, a subtle cow call can be the ticket to closing the distance and getting a shot. It’s easy to be overaggressive with calling during this phase of the rut too, so be sure to match the intensity of calling to the elk you’re hunting.

If you find a shooter bull with cows that isn’t rutting and he isn’t being vocal, I would spot and stalk in on him, using calls as a last resort. Also consider that if the herd contains younger bulls or spikes, they will be the first to come in if you try calling. You might catch a bull rutting cows on a second estrus cycle, which can translate into good hunting, but you’ll have to catch them on the right day.

Because of these scenarios, I focus my efforts hunting post-rut bulls in open country, where you can rely more heavily on spot and stalk methods. Hunting mature, post-rut bulls in timber with a bow is like hunting crickets in the middle of the afternoon with a slingshot.

When you’re in the heat of the moment, talking to a bugling bull, it can be hard to know exactly what to do next. The first thing to consider is your wind. Make sure you get the wind in your favor first. The next thing to consider is terrain and geographic location. If a bull can see where you’re calling from, he’s not going to come in. Elk have incredible hearing and can pinpoint your calls from hundreds of yards away.

Use terrain to your advantage. Keep your calls over the hill from a bull or in a draw. This will make the bull come over the crest of the hill or come around the corner to see exactly where you’re calling from. Anticipate this, and set up so that when the bull crests the hill or peeks around the corner, he’s in range for a shot. My rule of thumb is to always wait 30 minutes after my last call because bulls can take a while to come in, especially silent ones. The educated public land bulls or the ones that have been beaten up in a fight already take awhile to come in. A lot of times they come in silent, which you don’t see on TV. Lastly, if you’re wondering if you should call one last time, don’t. The more calling you do, the easier it is for a bull to pinpoint you.

Over-calling is your worst enemy. After you locate a bull, take a few minutes to judge his demeanor. Most of the time a bull is going to either act timid or fired up. There is rarely an in-between. If he’s screaming his head off every 30 seconds, you know he’s pretty hot and you will more than likely get away with a lot of calling. If he’s acting timid, bugling half-bugles or quiet bugles, he will be easy to scare off if you call too aggressively or too much.

When you begin to engage a bull with calling, get in as close as you can and copy him. How loud is he bugling? Is it a half-bugle or a couple grunts? Or maybe he’s letting out just a chuckle or two? In these cases, he’s probably not very fired up and bugles will scare him off or shut him up. Stay away from bugling or intense calling. Use some quiet cow and calf calls. This will make just about any bull curious enough to come in and check it out. Expect him to come in silent.

If he’s bugling hard, loud and often, he’s fired up and quite possibly ready for a fight. Get in close. Cut off his bugles with your bugles. Use cow calls. Work your way up to long, drawn out, high-pitched estrus calls once you have him worked up. Rake a tree and make noise, just like a bull elk with cows would do. There’s a good chance he’ll come in if you’re close enough to him. If he’s by himself and he’s that fired up, you better have your arrow knocked.

CALLING AT THE RIGH TIME??? THIS IS THE ELK HUNT YOU CAN HAVE!