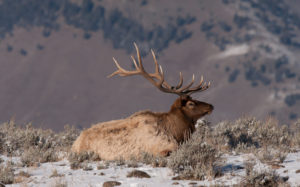 In a post covid world my gut says that it is a fair statement to say we are all a little more sensitive to any headline that has something to do with disease. In my circle of friends CWD and Brucellosis are the two wildlife related diseases that tend to get the most attention. Yes, EHD is a big one too, however that tends to be cyclical and the whitetails and antelope recover over time with solid management.

Along that vein an elk in the Bighorn mountains of Wyoming has tested positive for Brucellosis. Brucellosis was first identified in this region in 2012 but has not  made an appearance since 2016. That is a significant amount of time not to have a positive test, however with this disease’s relationship with cattle it can produce fear fairly easily when positive tests do happen.

On the bright side, in most areas elk tend to be in different portions of their range when cattle are on it, therefore limiting how much exposure cattle get from elk. I know, many of you are cueing up your pics of elk and cattle in the same areas to roast me on social media. But I submit to you this, elk on their winter ranges don’t typically end up in the same places that cattle are put to pasture for the winter. In the areas where it does happen there have been late season tags that are designed to mitigate interactions. In fact, I have a late season cow tag not far from where this bull tested positive.

Bearing all this in mind, I would urge all of us as hunters to ask our respective management agencies to keep testing but not make knee jerk reactions that could take years to recover from. What say you?

The post Brucellosis On The Rise???? Or Is It???? appeared first on Eastmans' Official Blog | Mule Deer, Antelope, Elk Hunting and Bowhunting Magazine | Eastmans' Hunting Journals.