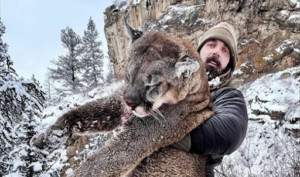 After a tough season when it seemed like the Broncos new multi-million-dollar quarterback had difficulty scoring, retired Denver Broncos defensive lineman and Super Bowl champion Derek Wolfe did score by killing a huge 200-pound, 8.5-foot mountain lion… and he did it with a bow. The giant cat had been “wreaking havoc” and killing pets in a residential area.

Derek received a call from a friend, and he offered to help.

When they got to the area frequented by the cat, they found a full-grown, mule deer that had been killed and dragged across the road, right across the street from somebody’s house. Then they followed those tracks up to a house and discovered the lion had been living beneath a woman’s porch.

Exhausted, dehydrated, and cramping, once they caught up to the cat Derek used his bow to kill it.  According to Derek, the hunt was tough and it “beat me up bad. I’m all cut up and scraped up. I was in full-body cramps [and] barely made it up there,” he said.

Regardless, Derek said “I was able to make a good shot, good ethical shot, [and] harvested the cat and got him out of there and did everything by the book. This was completely legal.

[Colorado Parks and Wildlife] CPW came down and checked the cat. And for me, I took the meat and got it processed. I’m going to eat that cat.”

Predictably, this incident ignited some outrage on social media, but this was a legal kill that most likely prevented further damage to pets and potentially even humans. CPW reports Wolfe is a licensed hunter who is in good standing with the state.