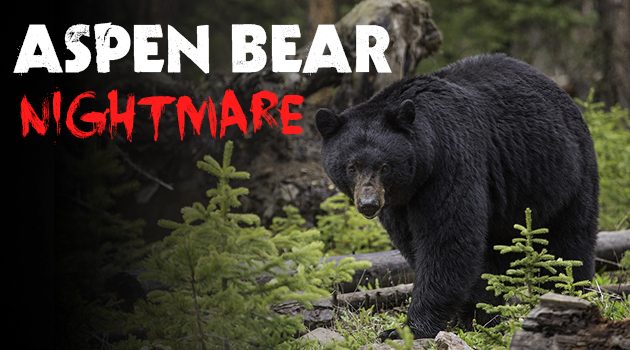 “ASPEN, Colo. – Colorado Parks and Wildlife and Aspen Police officers responded to the 300 block of East Hopkins Avenue in Aspen at 11:30 last night after a large black bear bit a local restaurant manager, resulting in four deep puncture wounds to the man’s leg.”

The above is from a press release from CPW telling of an incident dealing with a black bear in a populated area who had decided that a trash dumpster was his new favorite place to frolic. Employees from the restaurant that owned the dumpster were refusing to dump their trash in the dumpster while the bear was getting an easy meal. The manager, in poor judgement, decided that trying to scare the bear out was the best course of action and for his trouble got a nice bite mark or two on his leg.

According to CPW the bear will have to be put down once it is located and because bears are habitual with incidents like this, it is highly unlikely they won’t find him. This incident highlights to great effect how urbanization in places like Colorado is negatively impacting animals, in particular, predators. This is the third incident in the Aspen area recently and it is unlikely that negative interactions will stop.

So how did it come to this in CO? Let’s start with the obvious, a growing population and year round tourism in places like Aspen is putting people with little to no experience with bears face to muzzle almost daily.

With a growing trash output to match the growing human population it is pretty easy to see how opportunists like bears take to dumpster diving for an easy meal. Generally speaking there are two populations of bears that fall for the easy pickings, the youngest and oldest animals. The young animals have usually just been kicked off of their mother and they are searching for an easy meal. There is hope for these animals as moving them can be successful but it doesn’t take long to rack up three strikes.

Next up is a growing population of bears that only gets hunted during the absolute hardest time to harvest them. By and large most spring bear seasons are set up to harvest the oldest members of the population, the ones most likely to have conflict. As bears get older they get smarter and as they eat they wear down their teeth. Fewer teeth will mean that they will be searching for easier meals… like the back of a restaurant in the dumpster. If I had a giant tooth ache I would be eating a shake not hard candy, bears would do the same thing with leftovers being the shake.

To those of us who hunt them it’s no surprise that conflict is up in a place that doesn’t have a spring season. Will the spring season end all conflict? No, it will never go completely away but it sure wouldn’t hurt to have bear populations meaningfully managed to prevent this type of thing. Education of the growing population would also help but sometimes common sense has to prevail, was it really a good idea to try and scare that bear out of a dumpster?

What say you, would a spring season help prevent these conflicts?