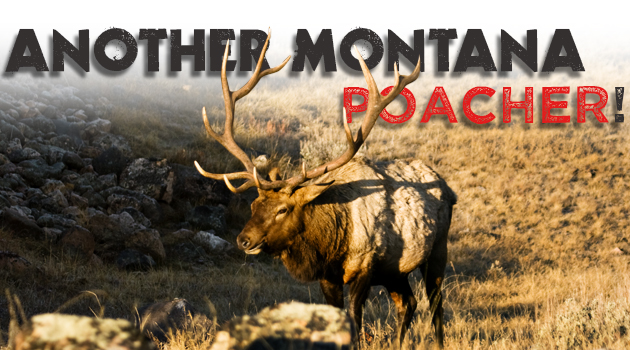 Yet another elk poaching case has come to light in Montana, this one taking place in Ravalli and Missoula counties. Both cases date back to 2017 and deal with Brady Joe Stamps killing elk illegally on private lands he did not have permission to be on, the second bull being shot after he had already filled his tag during the 2017 archery season and being left to rot because he knew it was on private land.

Now the real story behind this case isn’t the fact that Stamps poached two bull elk, trespassed, wasted a valuable public resource or that he has been found guilty of wildlife infractions in the State of Alaska where he lost his hunting rights for a year. The story isn’t that this joker is a repeat offender or that the State of Montana has chosen to charge him with one felony for illegal possession of a game animal and several misdemeanor counts for his additional nefarious activities. Nope, the real story is the work of FWP warden Justin Singleterry to build a case against Stamps.

Let’s face it, poachers will poach. There may be no punishment that society is willing to enforce that will deter poachers with any measurable efficacy. However, what we can do is to empower our game and fish agencies with the best possible information and tools to do their jobs to catch poachers before they strike again!

Warden Singleterry strung together an impressive array of evidence from cigarette butts and orange cloth to a recovered bullet and video surveillance. However, what got him started down his evidence gathering path was the anonymous tip from hunters who witnessed the poaching of the elk and who were also able to provide key descriptions of both the man who turned out to be Stamps and the pickup he was driving. It was this tip and subsequent information that led Singleterry’s investigation. Without the report these hunters filed there may never have been an investigation and who knows how many more animals Stamps would have poached before being brought to justice.

The point is this… we as hunters have a responsibility to do the right thing in and out of the field. Policing our ranks by reporting infractions isn’t snitching, you’re not a rat, it’s simply the right thing to do. There is a fallacy in law enforcement that the authorities know more than they actually do. The fact is that a great many poaching cases would go unknown and do go unknown to game and fish agencies because they aren’t reported.

So, my challenge to all of us… report suspicious activities. They may turn out to be nothing but they may just be the tipping point in a case that takes down a poacher.