A Guide to Field Judging Antelope & The Law of 7s 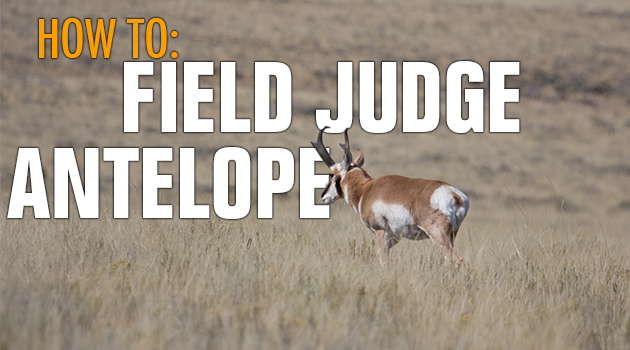 For most die-hard western antelope hunters, an antelope buck is considered of trophy quality when the score hits near or around the 80’ mark. This buck will represent a mature animal in the top 10% or better for the species in both genetic makeup and nutritional health.

The total score of a pronghorn buck consists of four evenly spaced circumference measurements, representing roughly 50% of the total score of the buck, along with a total length of horn measurement (about 40% of the total score) and a length of prong measurement which is only about 10% of the total score when all is said and done on average. From this we can easily make the assumption; that just like all horned animals, antelope are no different when we conclude when it comes to score, mass is king. Needless to say at this point, the first rule of judging antelope on the hoof is: if you find a buck that lacks mass, move on and keep looking. A relatively thin-horned buck would need to be insanely long to even begin to score well, probably in the 18-20” class for starters. These kinds of bucks do in fact exist, but are extreme rarities and mostly in Arizona and New Mexico. 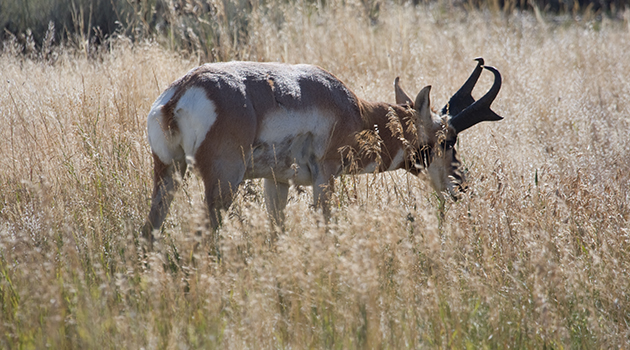 I nearly always focus my initial search for a buck that is very heavy, particularly on the base, followed by top-end mass. The top-end mass is usually the toughest buck to find as we go north. This portion of the horn is typically grown in the months of December and January, which are very, very tough months for antelope bucks in the northern regions of Montana and Wyoming. Shortcomings in the prongs and length can be compensated for by excessively heavy mass, particularly up top, while the contrary is generally not true.

While long prongs look good on the wall, they are of the least concern when looking for a high scoring buck. After mass, the second criteria I check off is the overall length of the horn and finally the prong. There are bucks in the records book with 13” horns, but they are rare, and the mass for this type of buck to qualify has to be beyond exceptional, almost unearthly.

Horn length can be a very tough measurement to judge. The really heavy bucks will tend to look shorter in length simply due to their mass. I once passed up on a buck initially because I honestly thought he was less than 14” in length. After my dad talked me into shooting the buck back at camp, we ended up putting him on the ground that night, only to find out his length was over 16 ½” and he grossed nearly 89” B&C! How could I have been so wrong? The buck was so heavy that he looked incredibly short. One of the biggest mistakes of my hunting career… almost. 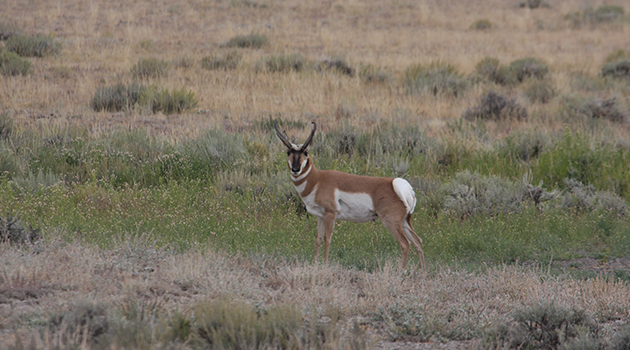 THE DOWN AND DIRTY OF FIELD JUDGING-THE LAW of 7s

If you are looking for a giant of a buck, one that scores into the all-time records book then you will need a buck that easily clears the 82” minimum score after deductions and the 60-day drying period. This buck will usually have to be in the 84” and up gross range when green. To clear this hurdle, a buck will need to clear the Law of 7s as I call it. As a baseline benchmark, this buck will need six 7s on each side which is two 7s on the total horn length, making at least 14”, then 7” bases and 7” second circumference under the prong, holding his mass nicely. This will need to be followed up with a 7” prong for the fifth 7 and then topped off with a 4” and a 3” top two measurements to get us our sixth and final 7 (14+7+7+7+4+3 = 42). This buck will have a 42” horn, giving him a total gross score of 84” which should be enough to clear the 82” net minimum once the horns have dried and deductions are taken off. Keep in mind, these are just rough averages and most bucks will be plus or minus on most of the measurements as you go along. Most of the time, a buck in this caliber will be in the 16” to 16 ½” range in length which will give you a few inches of slack on a few of the other measurements, after all, a 7” prong is incredibly rare and so is a 3” final circumference.

To put a number on most of these measurements in the field note that an antelope buck’s eye is about 2” wide, his ear is about 6” long and his head is nearly 15” long from mane to the tip of his nose.

In summary, to hope to put a pronghorn into the all-time records books, we are looking for a buck with horns as long as his head, from his mane to the end of his nose, a prong as long as his ear and bases that are at least an eye-and-a-half wide. And the final icing on the horn cake is a top end that is as wide as his eye and holds good mass all the way up. No pencil thin tops on this specimen, which can be a very tall order in cold climates where the bucks grow this portion of their horn during the brutally cold winter months.

Judging antelope bucks can be a very tedious game of fractional inches. In my experience, the most straightforward way for a buck antelope to reach and exceed the 80” barrier is to be both heavy (top and bottom), and longer than 16”. These two criteria alone will generally put a buck into the 80” and better range. As long as his prongs are at least decent, this buck should score well.

A trained eye is needed to put an accurate score on a buck through a spotting scope. The best way to get proficient at this game is to practice a lot on photos and antelope mounts. Our office is decorated with nearly a dozen antelope bucks in the 75” to 88” class and studying each one of these bucks knowing full well their gross scores, can really help to pick out each buck’s strengths and weaknesses giving an edge when it comes to a fall antelope expedition. Once you see a true giant of a buck, you will know it instantly. Once you put your hands on a few big bucks you will soon recognize that feeling of something special when your hands cannot fit around the buck’s still warm bases. Practice makes perfect when it comes to judging and antelope are no exception

MID-FALL MULIES: Hunting October Bucks
The Bow Test: Our Picks for the Best New Bows and ...