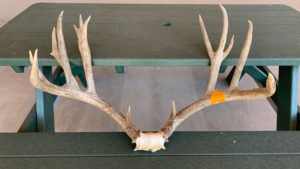 In a case that reads like a Hollywood movie script, Cody W. Davis plays the bad guy who is eventually apprehended and is fined a whopping $74,000 for poaching a 232-⅞” mule deer buck in New Mexico back in 2015.

Tipped off by the Operation Game Thief hotline, New Mexico Game and Fish officers discovered a headless mule deer buck and shortly afterward the stashed trophy head with antlers intact. They set up 24/7 surveillance cameras and caught North Dakotan Cody W. Davis returning for the head and antlers four months later. Davis led the authorities on a wild goose chase while he dumped the poached buck’s head in the Rio Grande river where it was eventually recovered downstream of where Davis discarded it. Over 2,000 man hours, 25,000 miles and search warrants in two states culminated in a full confession from Davis, which he later appealed, thus the 2021 judgment.

All told, Davis will be required to cough up $20,000 for the mule deer buck, and $54,000 to reimburse the state of New Mexico for the extensive investigation required in his case. I applaud New Mexico for the stiff fines, it’s about time a state took a hard line with poachers and hit them where it hurts, the pocketbook!

This case is also an excellent example of anonymous reporting working to apprehend poachers. If you see something, say something! It’s our job as law abiding hunters to help protect the animals we love by helping bring poachers to justice.